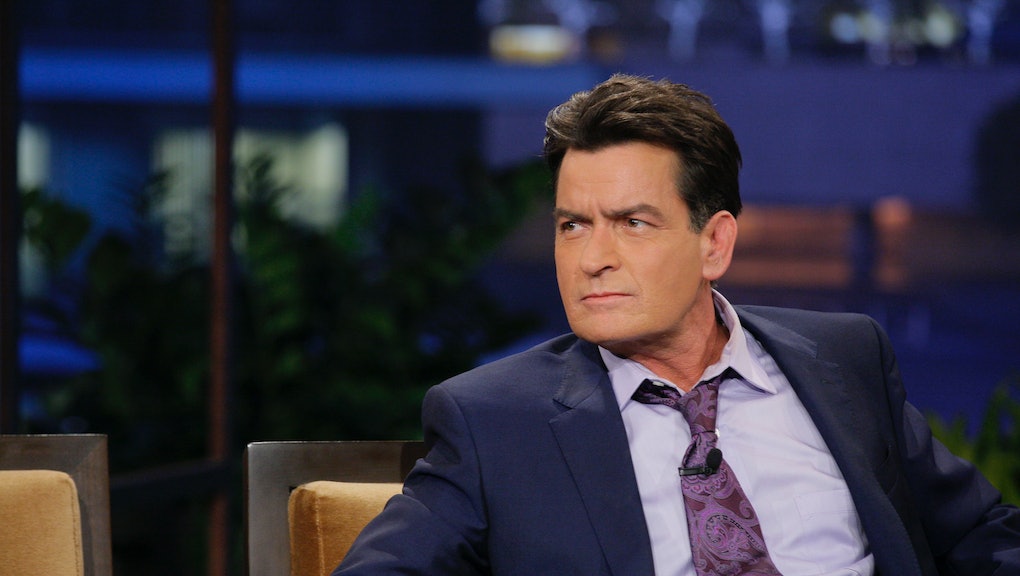 This week, Charlie Sheen, long known as Hollywood's "baddest bad boy," revealed himself as something else: a man living with HIV. After years in the spotlight, Sheen's disclosure made him more vulnerable than ever before. He's now the highest-profile face of the more than 1.2 million people living with HIV in the United States. But his own self-described journey also sheds light on something that we don't talk about much when it comes to contracting and then living with HIV: depression.

"It's a hard three letters to absorb. It's a turning point in one's life," Sheen told Matt Lauer on The Today Show. "I was so depressed by the position I was in [and] I was drinking way too much."

While treatment for HIV has improved dramatically in the past two decades, researchers are still trying to wrap their heads around what particular factors put a person at increased risk of contracting the disease. Scientists in the U.K. developed a study in which they examined how HIV-negative gay men who exhibited multiple symptoms of depression also participated in known risk factor activities. The results were sobering: The more depressed participants were, the riskier sex they had. In this case, gay men who weren't HIV positive but did suffer from multiple symptoms of depression were more likely to have sex without a condom, thus putting them at higher risk for sexually transmitted infections, including HIV. Those more likely to exhibit signs of depression included men who were single, smoked and drank regularly and battled substance abuse.

Broadly, mental illness in America is "tragically under-addressed and underfunded," David Fawcett, a substance abuse expert, told Mic. Fawcett is the author of Lust, Men and Meth: A Gay Men's Guide to Recovery and studying serious mental illness. From his vantage point, people living with depression are at much higher risk for HIV for very specific reasons: "Oftentimes [they] lack sufficient energy for self-care, or are dealing with untreated trauma."

Mental illness can also affect how a person does — or doesn't — respond to antiretroviral treatment after they've been diagnosed. Studies have found that people who live with both depression and HIV have a harder time adhering to their medication. Researchers have found that treating depression in people living with HIV often improves their overall health.

Living with HIV also puts people at higher risk for depression and anxiety. While widespread understanding of the virus has come a long way since the early 1980s hysteria over a so-called "gay cancer," there's still a great degree of social and cultural stigma attached to living with the disease. "A lot of times people assume if you're positive, you're sexually promiscuous," Fawcett said. "That can make disclosing one's status to friends, colleagues or potential partners especially terrifying."

Underscoring all of this is the fact that mental health care in America is sorely under-resourced. The United States spends $113 billion on mental health treatment each year, the Washington Post reports. While that sounds like a lot, it actually only accounts for for just more than 5.6% of overall health care spending. From 2009 to 2012, states cut $5 billion in mental health care from their budgets. That's left families to fill the void, an especially dicey proposition when they don't have the resources or are a cite of trauma themselves. "People see [mental illness] as a moral issue, and don't understand the medical aspect of it," Fawcett said. "It's a medical problem."

Like HIV, depression is a medical condition that's compounded by the stigma of having it. They're not mutually exclusive, according to researchers. But the nuances of their relationship have yet to be explored in depth. In Fawcett's analysis, they each carry "layers of stigma that get compounded."