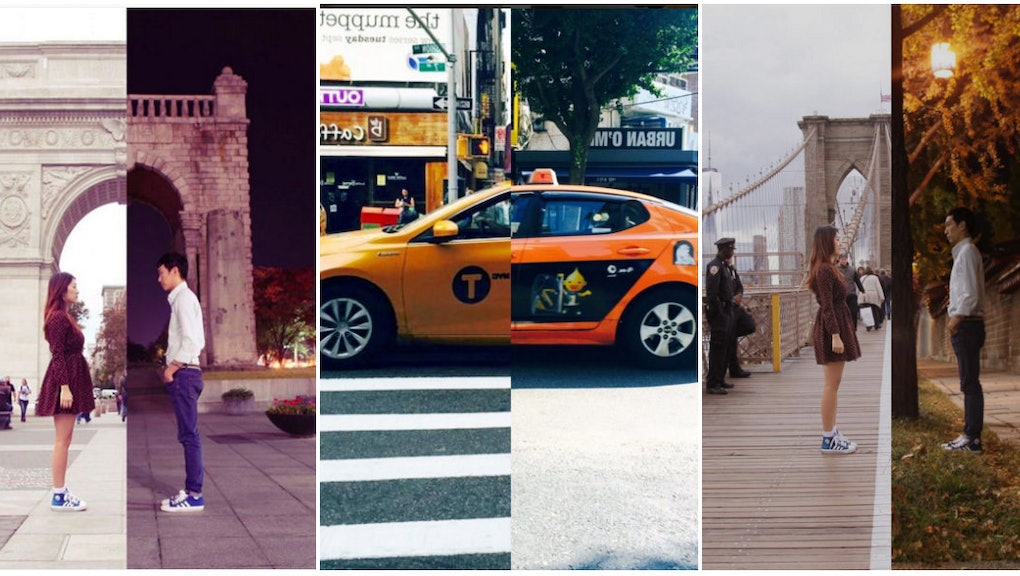 Some long distance couples sext. Others Skype every day. Korean couple Danbi Shin and Seok Li have their own unique way of staying connected: It involves Instagram, some smart photo editing and an impressive amount of time coordination.

The couple have been long-distance ever since Shin moved to New York, leaving Li in Seoul. Their photo project Half & Half features photos of Shin and Li seamlessly spliced together, so they comprise two halves of the same image. With more than 45,000 followers, the two have become something of an Internet sensation.

While Half & Half might seem like a simple digital photo project, it's actually quite a bonding experience for Shin and Li. The couple schedules their photo sessions so they can take the photos at the same time, albeit with a 14-hour time difference. For them, it's more than a shared hobby — it's a way of closing the distance between them.

"It gets quite emotional when we get inspired by doing the same thing, but in a different place," Shin told the Huffington Post Canada. "Sometimes, the cultural difference (between the West and the East), shows [a] different mixture of emotions even when we view the same object. That makes it interesting."

Shin and Li aren't the only long-distance couples to use technology to make the geographical distance between them seem a little bit smaller. If you're in an LDR but you're not quite as photographically inclined, there are plenty of ways to get creative together that don't involve a camera.

Some long-distance couples, for instance, use Tumblr as a way to blog together and stay connected, posting jokes, date ideas and pictures. Apps like QuizUp and Rabbit also let long-distance couples partake in standard date night activities, such as playing trivia games or having a movie night.

Technology has made it easier for couples to connect over long distances, but it hasn't necessarily alleviated the pain of being thousands of miles away from the person you love. Thanks to the magic of photo editing software, however, Shin and Li are starting to figure it out.