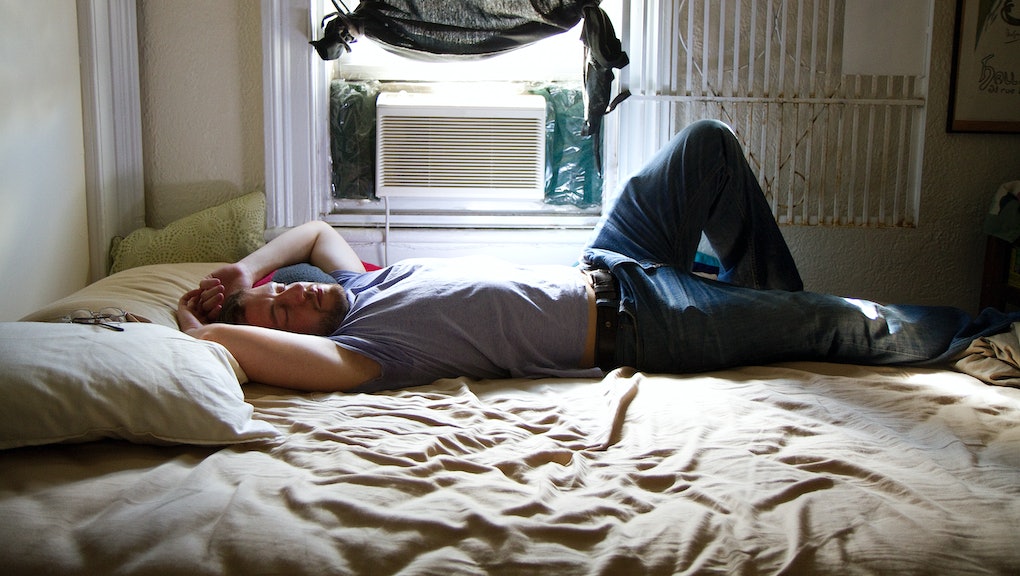 What It's Like To Be A 20-Something Relationship Virgin

Like most people his age, Marcus, 27, goes on dates every once in a while. He's had a few friends with benefits and he dated one person for less than six months. But has he had a serious, committed, meet-the-parents type relationship? Not yet.

"When I was younger, I never thought about dating or anything like that until I was probably 19 or 20, and even to this day it's not a huge thing in my life," Marcus told Mic.

"If I find someone I'm interested in, either offline or online, I'll try to start something, but if it doesn't go anywhere I don't worry about it."

Late bloomers: To a degree, it makes sense why 20-somethings like Marcus would delay entering serious relationships. In a culture that encourages young people to embrace their independence and build financial stability instead of settling down with a partner, it's all too easy for someone to happily remain single well into their 20s and beyond.

"I think it's still a social taboo to be single for 'too long', but I think it's slowly becoming more accepted, at least in my social awareness," Marcus said.

What's slightly more rare is someone like Marcus, who has never seriously dated anyone in his life. That's in part because statistically speaking, most people have their first experience with a boyfriend or girlfriend as teenagers, with one 2004 study estimating that around 84% of people enter their first serious relationship at an average of 18 years old.

But with the average age of marriage creeping upward (it's now 27 for women and 29 for men, compared to 23 for women and 26 for men in 1990) and only 16% of Americans saying they're actively looking for a committed partner, it seems that Marcus's story isn't as uncommon as we might think. In this context, delaying romantic commitment isn't something that only a handful of people do — it's something of a norm.

Everyone's looking for Mr. (or Mrs.) Right. Studies tend to focus only on those who have gotten married or are co-habitating, so research on people who haven't had any romantic relationships at all is slim. Anecdotally, however, millennials in their late 20s who haven't yet had a serious relationship claim that a big part of the reason why they're still single is simply because they haven't yet found anyone worth settling down with.

"I have really high standards and I refuse to get seriously involved with someone that doesn't do it for me," John, 27, told Mic. "It's not worth it."

Scarlett*, 25, agreed.  "I've met many people though online dating sites and with a few exceptions haven't been super excited about any of them," she said. "I've been single for long enough to know I'm just fine without a partner, so I'm not interested in jumping into a relationship unless it feels like something very special."

According to Deborah Stearns, a professor of psychology at Montgomery College, this type of reasoning is far from uncommon. As Stearns told Mic, young people expect their romantic partners to be their "soulmate" and their best friend, which can potentially set them up for failure in the dating world.

"That kind of increasing expectations can lead people to have unrealistic expectations of, 'I want this person to be perfect in meeting my needs' instead of 'I want this person to be a good fit for me and we're going to work on building this relationship that meets both of our needs,'" Stearns said. "If you're expecting some kind of idealized unrealistic perfection, that's obviously problematic because you're not going to find it."

For these singles, however, a relationship that doesn't meet their vision of what an ideal relationship should look like just isn't worth it.

"I still say being alone is better than being in a mediocre relationship," John said.

People who haven't had a serious relationship tend to value their independence. Millennials came of age during a shaky economy and many face a difficult job market and student loans. Surveys indicate that a majority feel financial security is a prerequisite to marriage.

Elizabeth Morgan, an assistant professor of psychology at Springfield College, told Mic that it may be taking longer for young people to establish a career, financial resources, and geographical stability, which may lead some to not feel ready to enter any relationship just yet.

"Young adults may be delaying entering into committed relationships and instead addressing their individual life plans first. Only later they may seek to integrate those with a partner," she said.

Perennially single people cite living in an area with a small pool of potential dates, social anxiety and becoming interested in dating at a later age as additional reasons why they haven't been in a serious relationship yet.

"I love the freedom of being single. What I do is never dependent on someone else, of course it comes at the cost of being lonely sometimes, but nothing is perfect," Marcus said.

It's easier than ever to "shop" for a partner. Thanks to dating apps and social media, singles can easily jump from one casual date to the next. When it only takes a few texts to break it off or find someone new, that makes it all too easy to let go of a relationship that just isn't exciting anymore, instead of working the kinks out.

"I think our generation is bored more than anything," Marcus said. "It used to be that life was short and you made the best of your situation, but now if you get bored with someone or a problem comes up in a relationship, it's easier to swipe right than communicate problems with someone."

Combine that with society's relatively greater openness about casual sex, and you've got a recipe for a culture that finds it relatively easy to cut our losses instead of investing our time in committed relationships, said Rebecca Plante, associate professor of sociology at Ithaca College.

"I think it is a complex stew of this perfect moment in culture where you've got such a reduced moral disapprobation for choices people are making in their personal, intimate sexual lives, combined with technology in our hands which makes it easy for us to choose, to search, to hunt, to shop," Plante told Mic.

Sometimes, it's just flat-out hard to find a partner. While some millennials are staying single by choice, it's also important to consider that there are some who are not.

"I have found several girls that have blown me away and I would have absolutely gone with them exclusively. But they didn't feel the same for me," John said. "Which is of course the other part of this equation. It takes two for a relationship."

Leo, 31, from Arizona, told Mic that he's been told that all it takes is for him to "work on himself" and he'll attract the right girl, but it turned out that's easier said than done.

"As I grew up, I kept wondering when girls were going to like me, like they liked all the other guys, and it just... never happened," Leo said. "I have theorized that I have some personality defect, but girls have always told me that I'm such a sweet guy and they're sure I'll find someone perfect for me some day."

It's totally fine if you've never been in a relationship before. If someone has engaged in exclusively casual hookups, that doesn't necessarily mean they'll be bad at maintaining serious relationships or won't be able to when they meet someone, said Stearns. In fact, having strong friendships (or even friendships with benefits) can help people gain gain the skills they need to navigate committed relationships, such as the ability to compromise and effectively communicate.

Stearns cautioned, however, that having a string of casual flings might not necessarily enable you to develop skills like conflict resolution and communication, especially if the relationship is totally one-sided. "It's not that you wouldn't have the opportunity to develop those skills; the question is, did you bother to? Or did you just dump the person whenever it got hard?" Stearns said. "There's nothing wrong with that, but it doesn't leave you in a place where you know how to negotiate conflict."

Though they admit it can be embarrassing to still be single and that they do want to find that special someone some day, most of the singles Mic spoke with said they didn't actively worry about their statuses. They emphasized that it was much more important to them to find the right person than to settle into a relationship with someone who wasn't quite right.

Scarlett, for instance, is totally fine with being perennially single. She said her single status is more a question of how long she wants to wait to get serious with someone, rather than whether or not she's able to do so.

"There are definite pros to millennials waiting longer to settle down: we take more time to travel, get graduate degrees, pursue careers that are really fulfilling to us, take risks, etc," Scarlett said. "Being married with two kids in the suburbs by the time you're 30 is still an option, but it's not the only option and I think that's really empowering both for men and women."