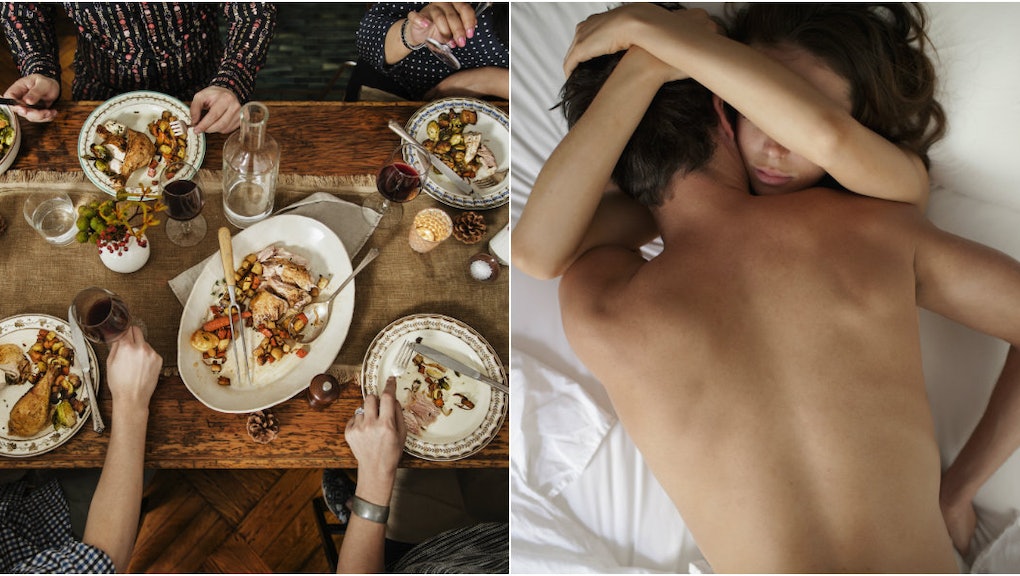 If you've ever had sex on an extremely full stomach, you probably know how unpleasant it is: the feeling like you're gonna barf at any moment, the sound of the contents of your stomach sloshing back and forth, perfectly timed with your partner's thrusting. The discomfort can be so overwhelming that it forces you to focus on your stomach instead of your genitals, which is never a good mindset to be in while you're having sex.

Unless you're a professional competitive eater, having sex on a full stomach is something you can usually avoid. But Thanksgiving presents an interesting conundrum in this regard. Think about it: If you're home for the holidays, you might only have one night to bang that guy you had a crush on in high school or the quasi-attainable girl next door. So when considering the eternal question of to bone or not to bone, you might just have to opt for the former, the contents of your stomach be damned, even if it ends up looking like this:

If you find yourself in this position, keep in mind that there's an unexpected benefit to having sex on Thanksgiving. According to a study conducted by researchers from the University of Pennsylvania and Drexel University, being full actually makes women "more responsive to romantic cues," particularly if they'd reported having dieted before. When presented with arousing stimuli, such as photos of couples holding hands, women were more likely to respond amorously after they were satiated than before.

For men, it's a little different. Cleveland Clinic, for instance, warns that overeating is linked to erectile dysfunction. (For the record, smoking cigarettes is as well, so instead of lighting up a couple of cigs to deal with the inevitable anxiety that comes with big family gatherings, perhaps wait until after the meal is over and sneak out out of the house, high school-style, for some good old-fashioned boning.)

There is a major benefit to slow, lazy sex: It won't wake up your parents. "This could be a good opportunity for some really quiet sex," Kerner told Mic.

That said, there are some caveats. Kerner advised against drinking too much wine at dinner, as that "will depress your nervous system," which can cause diminished sexual response. So maybe lay off the wine and pick up a joint instead.

At the end of the day, however, having sex after a Thanksgiving dinner isn't for everyone. You might just want to curl up in front of the TV at 6 p.m. and fall into a food coma, particularly if you reached for that fifth slice of pecan pie and/or spent the meal arguing with your aunt Kathy about Donald Trump. Thanksgiving is emotionally exhausting as is.

"Physical discomfort is pretty incompatible with desire," researcher Alice Ely, who authored the female desire and overeating study, previously told Mic. "After not eating for a long time we're feeling uncomfortable, and when we overeat we're uncomfortable, but this middle ground of meeting nutritional needs without being overfull may be a sweet spot (no pun intended)."

So if you're looking to get laid this holiday season, it's probably best not to gorge yourself. But if you do end up taking that ninth slice of pecan pie, don't let that stop you from buying a ticket to Fucktown. You can do it! We believe in you!

For more useful lifehacks in your email inbox, sign up for the MicCheck Daily newsletter.