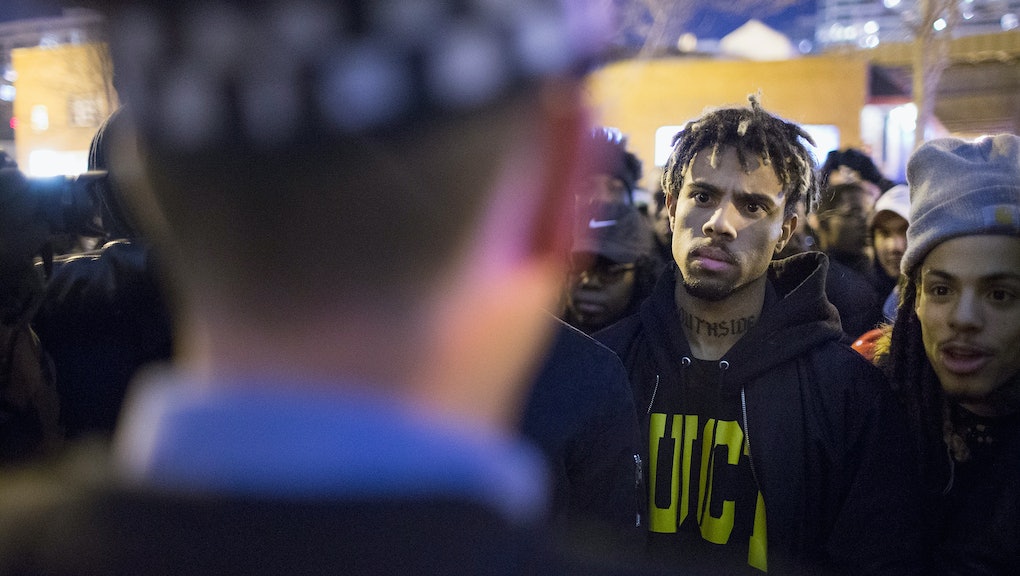 Chicago police cited one prevailing fear about releasing the brutal footage of one of its officers shooting 17-year-old Laquan McDonald 16 times: that the video would incite violence from the city's outraged residents.

"You have a right to voice your opinions but do it in focused and responsible way so all voices [are] heard," Chicago Mayor Rahm Emmanuel scolded residents at a news conference Monday. That sentiment was echoed by other city leaders, like Shari Runner, the interim president of the Chicago Urban League, who said in a statement, "While we understand the feelings of outrage, distrust and fear that stem from the growing imposition of violence by police officers who are sworn to protect and serve — we are asking the community to await a thorough and transparent review of the evidence and facts to ensure justice is served."

But after the video was released Tuesday night, something powerful happened: No violence broke out. Hundreds of outraged residents took to the streets and exercised their right to peacefully assemble. They yelled, cried and chanted. By night's end, it was clear they were exhausted of living in constant fear of violence, under a notoriously corrupt police force, and they wanted change.

That the video came to light at all, and the officer at the center of it became the first member of Chicago law enforcement in recent memory to be charged with murder for an on-duty incident, are minor miracles. As Curtis Black described in the Chicago Reporter, a city whistleblower tipped journalist Jamie Kalven and attorney Craig Futterman off that McDonald's murder wasn't being investigated thoroughly by the department. Burger King employees came forward and said officers deleted crucial surveillance footage from its security camera shortly after the shooting on Oct. 20, 2014. The department's initial report of the incident — that McDonald posed a violent threat to officers — turned out to be a lie.

"This case shows the operation of the code of silence in the Chicago Police Department," Futterman told the Chicago Reporter. "From the very start you have officers and detectives conspiring to cover up the story. The question is: Why are they not being charged?"

In February, Spencer Ackerman issued a bombshell report in the Guardian about the Chicago Police Department's long history of torturing its black residents. In what was described as a "domestic black ste," corrupt officers took residents to an abandoned warehouse called Homan Square, where they were beaten, caged, shackled and sometimes killed.

Richard Zuley, a former Chicago detective who later went on to torture inmates at Guantanamo Bay, was said to have mastered his techniques at Homan Square. Several detainees were forced to falsely admit to crimes they didn't commit.

"There have been a number of really bad apples in the Chicago Police Department who unquestionably have railroaded unknown numbers of innocent people into prison," Rob Warden, founder of Northwestern University's Center on Wrongful Convictions, told the Guardian.

In April, the city reached a $5 million settlement with McDonald's family. That same month, the city also awarded $5.5 million to compensate more than 100 victims of a former Chicago police commander, Jon Burge, who oversaw two decades of police torture of residents in the city. Anthony Holmes told the Chicago Tribune about being arrested by Burge in 1973 and taken to a police station where he was electrocuted until he confessed to a murder he didn't commit. He spent 30 years in prison.

Burge later told reporters he found it "hard to believe" the city would "contemplate giving reparations to human vermin" like the "guilty vicious criminals" he arrested. Burge was convicted of perjury in 2010 and spent less than four years behind bars.

This is what brought Chicago's residents out into the streets Tuesday night. "It's powerful we're coming together," Justin Taylor, an 18-year-old college freshman home for Thanksgiving break, told reporters. "Things like this happen too often."