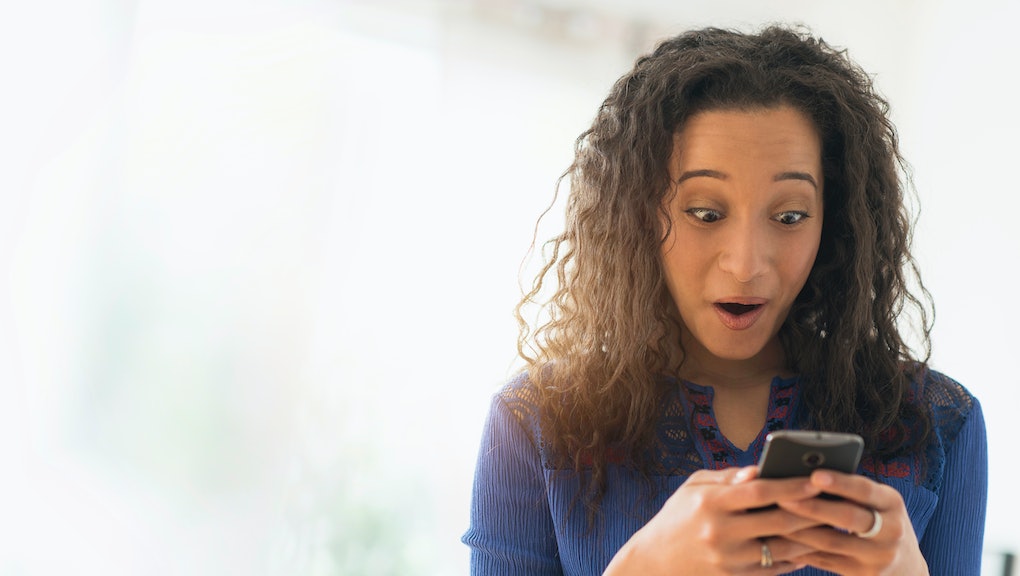 Now that an estimated 20% of Americans between the ages of 25 and 34 are using online dating sites, it seems like everyone and their mother is on Tinder. But with the rise in online dating comes the rise of assholes who see dating apps as a vehicle for harassing and disrespecting women.

According to a 2014 Pew Research Center poll, nearly 25% of young women between the ages of 18 and 24 report having been sexually harassed on the internet — and online dating sites and apps provide the ideal environment for such abusive behavior. The problem has gotten so bad that Instagram accounts like Bye Felipe are expressly devoted to exposing men who send abusive or threatening messages to women online.

Well, enough is enough. As 2015 comes to a close, it's time to put an end to demeaning, abusive, threatening and downright gross behavior on dating services. To commemorate the New Year and to provide a guide of sorts to single men on the internet, here's a list of dudes who absolutely need to get off dating apps in 2016. Pay attention, guys. You just might learn something.

1. The guy who calls you fat when you reject him

Rejection is never fun, but there's something to be said for facing it with a bit of class — which decidedly does not involve calling a woman fat and ugly when they tell you they're not interested.

2. The guy who clearly has major boundary issues

You'd think most men would be able to differentiate between an innocent Google search of someone they're interested in and full-blown cyberstalking. Sadly, that is not the case. Maggie Serota, the managing editor of Death and Taxes, experienced this firsthand when she received a lengthy message from a man who criticized her "terribly unevolved" taste in music and had clearly researched her entire internet presence beforehand.

"I get unsolicited, overly sexual emails all the time and a few that insult my appearance ... but the way this guy laid out his online obsession with me and his research methods just put me over," Serota previously told Mic.

So something for guys to remember in 2016: if you see a girl you like on Twitter, don't send her a 500-word message insulting her on a separate social media platform. Maybe just say "hi" instead — or, even better, don't say anything at all.

3. The cheapskate who demands you pay him back for a shitty date

After meeting up with a man from Tinder, Lauren Crouch decided she just didn't feel the spark. So she sent a polite message saying that while it was nice to meet him, she just wasn't that into him. Instead of taking the hint and going on his merry way, however, the gentleman asked her to reimburse him $5.33 for the date. The luxury excursion he'd doled out for? A trip to Costa Coffee.

It would behoove anyone in the dating world to remember, as Crouch wrote on her blog, "you do decide yourself what to do with your money, and last night you decided to spend it on a coffee. I don't come with a money-back guarantee. Dates aren't commodities."

4. The guy who won't stop hitting you up for nudes

Guys, if you're chatting with a lady on the internet, please, for the love of God, do not ask her for nudes during your first conversation with her. While you might be totally comfortable sending photos of your peen to someone you've been chatting with for a grand total of five minutes, that doesn't mean it's OK to hit someone else up for photos of their genitals and then call them a lesbian when they don't send them.

5. The guy who has no chill

We all get a little antsy when someone doesn't reply to a message right away, but waiting a few hours for someone to respond to your message doesn't give you an excuse to literally threaten them with bodily harm.

Dating apps are an ideal opportunity for straight white dudes to flaunt their privilege. Case in point: this guy who messaged a girl saying he was "throwing [her] a bone" because he was white and she was black. The racial politics of online dating have been well documented, but we'll make this super simple for you guys: If you think messages like this are OK, just stay away from women entirely.

Some charming gentlemen on the internet fancy themselves the morality police. So when they see a woman on Tinder quoting suggestive song lyrics, they feel compelled to wag their fingers at her for it. Such was the case with Olivia Melville, who described herself as the "[type] of girl that will suck you dry and eat some lunch with you." When a screenshot of her profile went viral, she was met with a torrent of abuse, with one user writing,  "I'd rape you if you were better looking.

Had any of these winners taken the time to look up the quote on Google, they would've realized it was a reference to a Drake verse on Nicki Minaj's song "Only." But hey — why care about accuracy when you have the opportunity to publicly threaten a woman with rape on the internet?

8. The guy who thinks you're just dying to see his D

Many women say they just don't find dick pics all that sexy, but that hasn't stopped the unsolicited crotch shot from becoming a staple in the digital dating world. Suffice to say that if you don't receive a woman's express consent beforehand, sending a dick pic is just another form of harassment — and women get enough of that as it is.

Even in 2015, women who self-identify as feminists face a degree of stigma, and that includes on Tinder. For instance, when Laura Nowak put the word "feminist" in her profile, the messages she got were just about what you'd expect.

From the man who told Nowak she belonged in the kitchen to the "nice guy" who magnanimously said he would sleep with her anyway, the responses to Nowak's profile inspired her to create Feminist Tinder, an Instagram account chronicling her experiences.

"I think it's important to talk about these perspectives on feminism and highlight that misogynistic double standards are rampant and active in our culture," Nowak told the Huffington Post. Clearly, they're especially rampant in the online dating world — but hopefully, that will soon change.