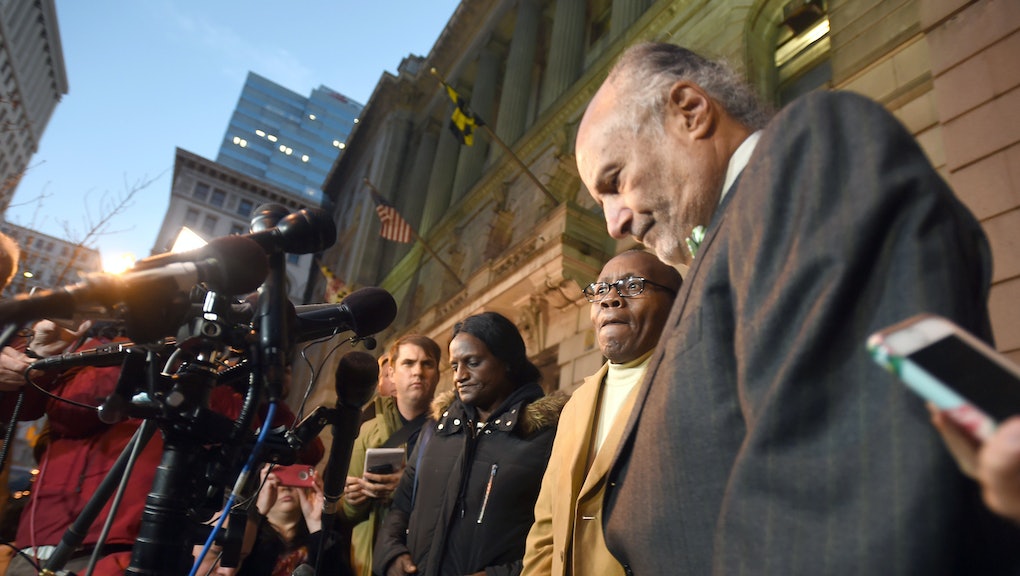 Baltimore's Response to the William Porter Mistrial? Prayer Over Protest

For weeks, Baltimore city leaders feared that a verdict in the trial of William Porter would once again provoke violence in the city's streets. But instead of violent protests in a repeat of last spring's civil unrest, outraged citizens took the streets and did something that shocked everyone: They prayed.

Porter is the first of six Baltimore police officers to stand trial for the death of Freddie Gray, an unarmed 25-year-old black man who died in April of a partially severed spine suffered in police custody. Shortly after Judge Barry G. Williams declared a mistrial Wednesday, Baltimore Mayor Stephanie Rawlings-Blake pleaded with the city for peace, telling reporters that "as a unified city, we must respect the outcome of the judicial process."

It's a judicial process that was disappointing for both sides. Judith Browne Dianis, co-director of the civil rights organization the Advancement Project, noted "justice has been delayed."

In a statement, the Baltimore Fraternal Order of Police said the mistrial was "obviously frustrating for everyone involved."

In a press conference shortly after the mistrial was announced, the Gray family's attorney, Billy Murphy, told reporters: "This is just a temporary bump on the road to justice. It happens. It's part of how the system works."

It's frustration with that system that drew thousands of people into the streets in April, shortly after details of Gray's death went public. For nearly two weeks, protesters gathered to demand answers in the case. On April 25, those protests turned violent, as people clashed with police in the streets, throwing rocks and overturning cars. When it was all said and done, 250 people were arrested and a state of emergency was declared in Baltimore. Later, it was revealed that the police may have instigated the violence by shutting down a major transit hub used by thousands of high school students, leaving them frustrated and stranded for hours.

Rawlings-Blake wasn't the only city leader who was bracing for violence. On Monday, Baltimore City Public Schools CEO Gregory Thornton sent a letter to students' families warning them against protests of any kind.

"We need to make it clear that student walkouts, vandalism, civil disorder and any form of violence are not acceptable under any circumstances," he wrote. Thornton had been roundly criticized in April for threatening to punish students in school for actions they took during the unrest, and his letter this week received similar pushback. The American Civil Liberties Union denounced it, as did the city's students who reiterated their First Amendment right to protest, and the school district ultimately backed down.

One of the night's most moving scenes came at the intersection of Pennsylvania and North avenues. In April, it was the scene of violent clashes between police and protesters. At one point, an anti-violence group called 300 Men March created a human shield to protect protesters from police in riot gear. But on Wednesday, the shield wasn't necessary — protesters locked hands in what was called a multi-faith serenity prayer.

Sadly, the night did end with a few violent police encounters. Baltimore police shot and wounded one man in the leg, though the unidentified victim is expected to survive.