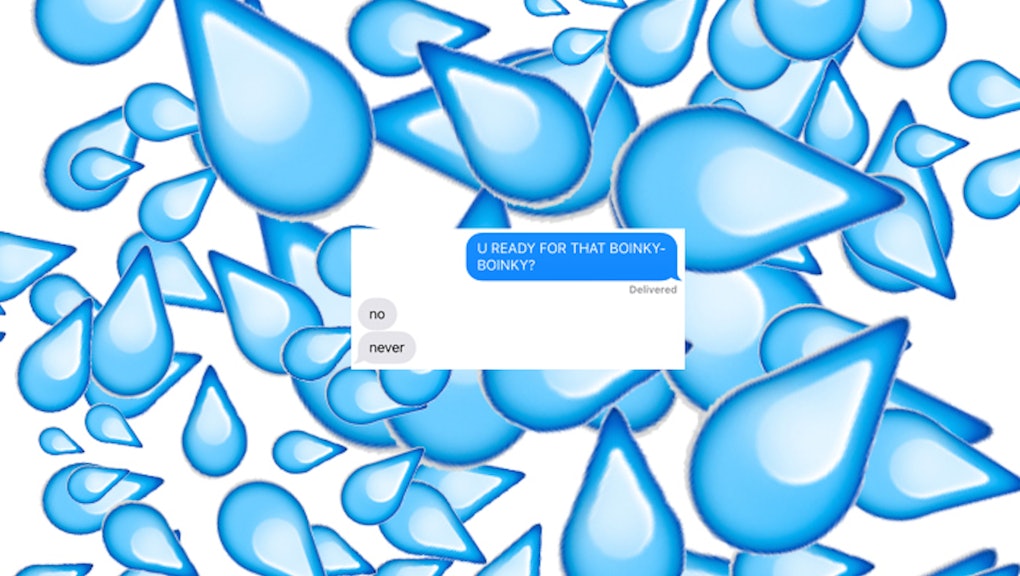 In 2016, we've moved on from antiquated terms like "making love." The most generous thing you can do on the internet is smash that like, or aggressively like someone's content. Henceforth, when you have beautiful sex with someone you love, you will be smashing [his/her/their] like, and smashing it hard.  As in "I smashed her like tenderly last night" or even "I smashed their like at full force and they came immediately."

We know what "boinking" is — it's boning — but this slang is tired. If science has taught us anything, it's that talking like an infant is the ultimate way to induce erections. Why not spice things up a little bit and text your significant other, "Down for some boinky-boinky tonight?" They're bound to get at least a half-chub upon reading.

We all have that girl or boy in our life who is a mere slampiece — good for some boinky-boinky every once in awhile, but that's all. But what about when a fuckbuddy is so magnificent at getting dirty, you want to shout it to the world?  As in, "Last night, we got into some dirty dirty stuff, and my slampiece became my slam-masterpiece!"

As we've already established, saying "let's have sex" is boring. But what about saying "make a sex" in a cartoonishly Italian accent while pinching your fingers together? Studies show that you're ten times more likely to get dicked down if you hit on someone in an obviously fake accent; that's just science.

A fuck buddy is a person you have sex with regularly with no strings attached. A selfuckbuddy is someone who exists merely to receive your fire nude selfies. They respond with a simple fire emoji or maybe they'll throw you a pic every once in awhile. Ultimately, they exist to consume your amazing nude content that's too racy for the web.

You may have made a sex with them once or twice. But perhaps they live across the country or it was just a one-time thing: That's when they go from being a fuckbuddy to a selfuckbuddy. Everyone needs at least one selfuckbuddy in their lives.

Everyone needs at least one selfuckbuddy in their lives.

8. Give you the cummies

If you're looking for a way to delay your orgasm in 2016, simply look your partner in the eyes and say, "Tonight I will give you the cummies. I will do whatever it takes. I won't stop until you either ask me to stop or I give you the cummies." These sentences are proven to reduce wetness and/or hardness by 50%, allowing you to smash your bae's like all night long!

This is when two nerds have sex, obviously.

To go Bang-sy is to be the Banksy of sex. Pick up a stranger in a bar while wearing a mask. Don't exchange names. Do some dope street art together. Duel your lightsabers in the middle of the street to make a statement about politics. Part ways and never see each other again.