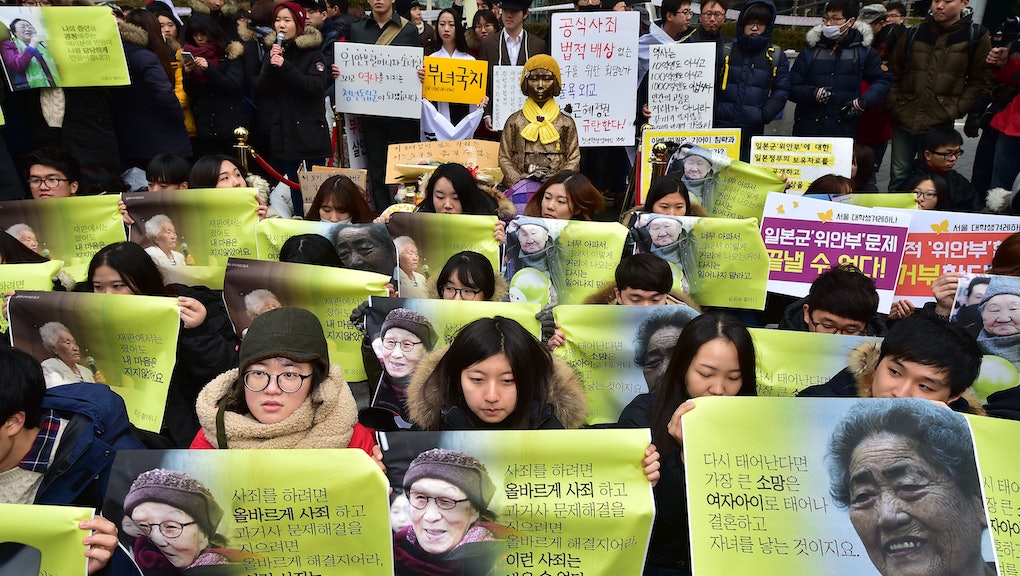 $8.3 million. That's how much the government of Japan agreed to pay 46 South Korean women on Monday, the only public survivors of Japan's campaign of sexual terror in the Korean peninsula during World War II.

Two of the women — Lee Yong-soo and Gil Won-ok — were joined by hundreds of supporters Wednesday in the streets of Seoul, marching in protest against the decision, Reuters reports.

Known euphemistically as "comfort women," the 46 survivors are the only living members of a group of 238, who came forward in the early 1990s as victims of sexual enslavement at the hands of the Japanese military.

Japan's occupation of South Korea lasted from 1910 to 1945, according to the New York Times. During that time, Japanese soldiers forced thousands of women in its occupied territories in Asia — including China and the Philippines — into sexual slavery at their disposal, a campaign of violence that ended only when war burned through Asia, Europe, North Africa and the South Pacific in the 1930s and '40s.

Things have been tense ever since. Japan issued an official apology to South Korea in 1993, and set up a fund to compensate the then-60 living victims. That fund, however, relied on private donors, and was never "fully accepted by Koreans," according to the Times.

Monday's agreement will instead draw money from Japan's national budget, to be placed in a fund to provide medical and nursing services and support for the remaining victims. It is unlikely that any of the 46 women will receive any direct financial compensation.

The payout also came with another apology from Japanese Prime Minister Shinzo Abe, which was applauded by South Korean President Park Geun-hye and U.S. Secretary of State John Kerry. The foreign ministers of Japan and South Korea both called the agreement a "final and irreversible resolution," the Times reports.

But South Korea paid a price for it. As a condition of the pact, the government in Seoul will never again criticize Japan over its sexual enslavement of South Korean women. For the past few years, the enduring symbol of this criticism has been a golden statue of a young South Korean girl meant to represent the victims, which was erected in front of the Japanese embassy in Seoul in 2011.

Many critics in South Korea say the payout isn't enough.

"The agreement is nothing but a diplomatic collusion that thoroughly betrayed the wishes of comfort women and the South Korean people," the Korean Council for the Women Drafted for Military Sexual Slavery in Japan, an advocacy group, said in a statement, according to the Times.

"We are not craving for money," Lee, 88, one of the two survivors who protested Wednesday in Seoul, said. "What we demand is that Japan make official reparations for the crime it had committed ... The agreement does not reflect the views of former comfort women. I will ignore it completely."

Protests have been held outside the Japanese embassy in Seoul on a weekly basis since 1992, according to Reuters. The average age of the remaining 46 survivors is 89 years old, and though their government has reached an agreement around their cause, Wednesday's protests suggest the issue is far from resolved for many of the victims.