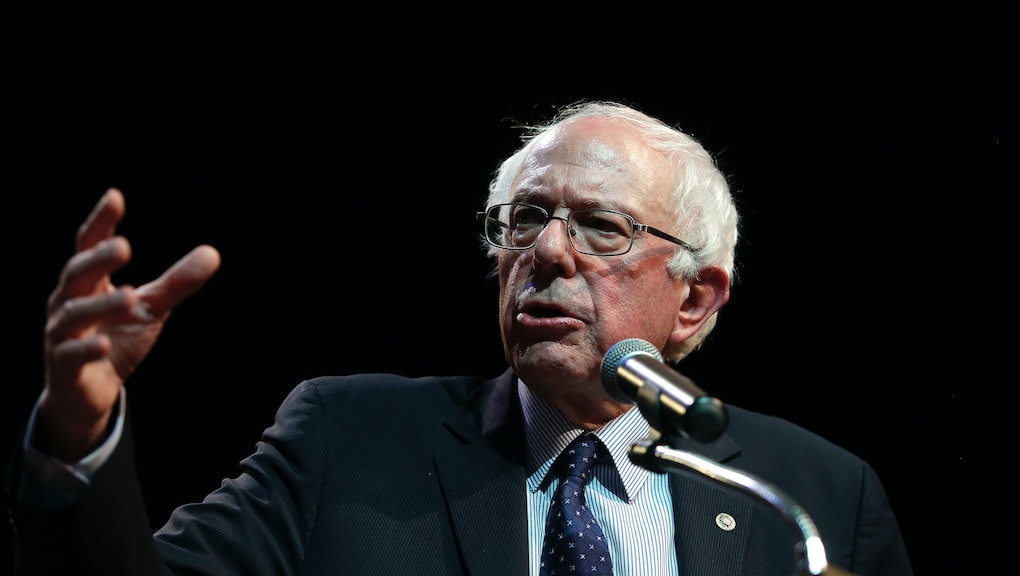 Sen. Bernie Sanders (I-Vt.) took his combative message for big banks to the financial capital of the world on Tuesday, vowing during a speech in New York to break up large financial institutions and pledging to make Wall Street reform a top priority should he succeed in his quest for the presidency.

Linking his fight against big banks to the trust-busting progressivism of President Theodore Roosevelt and the fiery populism of Sen. Elizabeth Warren (D-Mass.), Sanders said that within the first year of his administration, he would break up too-big-to-fail financial institutions.

"Greed, fraud, dishonesty and arrogance — these are the words that best describe the reality of Wall Street today. So, to those on Wall Street who may be listening to my remarks — and I'm sure there are many of them — let me be very clear: Greed is not good," he said, alluding to Gordon Gekko's notorious line from Oliver Stone's 1987 film Wall Street. "In fact, the greed of Wall Street and corporate America is destroying the fabric of our nation. And here is a New Year's Resolution that I will keep if elected president: If you do not end your greed, we will end it for you."

Reiterating a long-held stance, Sanders argued for the restoration of the Glass-Steagall Act, part of a 1933 law that separated plain-vanilla commercial banking from riskier investment banking and was repealed under a 1999 law signed by President Bill Clinton.

A race to the left: While Sanders has long been a big-business antagonist, Democratic frontrunner Hillary Clinton faces persistent suspicion in some progressive corners over her ties to many titans of the financial industry. The financial sector has been a top source for Clinton's campaign fundraising since her 2000 campaign for the United States Senate, and she attracted criticism for earning millions for paid speeches before Wall Street firms after leaving the State Department in 2013.

But as the Democratic Party has moved to the left on economic issues, Clinton has adopted an increasingly aggressive posture toward Wall Street, encouraging even erstwhile skeptics. Warren, who once chided Clinton for siding with the industry in a key bankruptcy reform vote, recently praised Clinton's pledge to fight GOP efforts to chip away at the Dodd-Frank financial overhaul law and restore regulations already pared back by Congress.

Though Clinton continues to oppose the reinstatement of Glass-Steagall, she has called for a "risk fee" on large financial institutions and promised to equip regulators with "the authority and tools necessary to reorganize, downsize and ultimately break up any financial institution that is too large and risky to be managed effectively," as she wrote in a New York Times op-ed last month.

Simon Johnson, an economist at the Massachusetts Institute of Technology and a vocal critic of financial deregulation, told Mic in a recent interview that Clinton has "exceeded expectations," specifically applauding her plan to tax systemically risky institutions.

"The overall atmosphere has shifted," Johnson said, with Democratic candidates like Clinton and Sanders proposing Wall Street reforms "more forward-reaching" than those signed into law by President Barack Obama.

Underscoring the profundity of the shift — and how progressive populists like Sanders and Warren have helped reshape internal debates within the Democratic Party — Clinton has sought to outflank Sanders from the left on financial reform. On Monday, the Clinton campaign's chief financial officer, Gary Gensler, a former top regulator in the Obama administration, took Sanders to task for what he called a "hands-off" approach to elements of the so-called shadow banking sector.

"Any plan to further reform our financial system must include strong provisions to tackle risks in the 'shadow banking' sector, which remains a critical source of potential instability in our economy. This includes certain activities of hedge funds, investment banks like the now-defunct Lehman Brothers and insurance companies like AIG," Gensler said in a statement by the Clinton campaign. "Unfortunately, Sen. Sanders has so far taken a hands-off approach to some of the riskiest institutions and activities in our economy, which were among the biggest culprits during the 2008 crisis."

In his speech Tuesday, Sanders pushed back against that criticism.

"Now, my opponent, Secretary Clinton, says that Glass-Steagall would not have prevented the financial crisis because shadow banks like AIG and Lehman Brothers, not big commercial banks, were the real culprits. Secretary Clinton is wrong," Sanders said. "Shadow banks did gamble recklessly, but where did that money come from? It came from the federally insured bank deposits of big commercial banks — something that would have been banned under the Glass-Steagall Act."

Sanders also said that Warren's bill to restore Glass-Steagall "aims at the heart of the shadow banking sector."

The divide: Though Clinton and Sanders are vying to convince progressive voters of their tough-on-Wall Street bona fides, Sanders' speech highlighted the persistent divisions in their respective approaches to the financial sector.

While Clinton said in last month's Democratic debate that she wants "everybody," even big businesses, to be her fans, Sanders minces no words in castigating Wall Street barons.

Reprising a favorite line, Sanders said on Tuesday, "The reality is that fraud is the business model on Wall Street. It is not the exception to the rule. It is the rule." Clinton, he argued, was too incremental in her approach to tackling the industry.

"Secretary Clinton says we just need to impose a few more fees and regulations on the financial industry. I disagree," he said.

"My opponent says that, as a senator, she told bankers to 'cut it out' and end their destructive behavior. But, in my view, establishment politicians are the ones who need to 'cut it out.' The reality is that Congress doesn't regulate Wall Street. Wall Street, its lobbyists and their billions of dollars regulate Congress. We must change that reality, and as president I will."