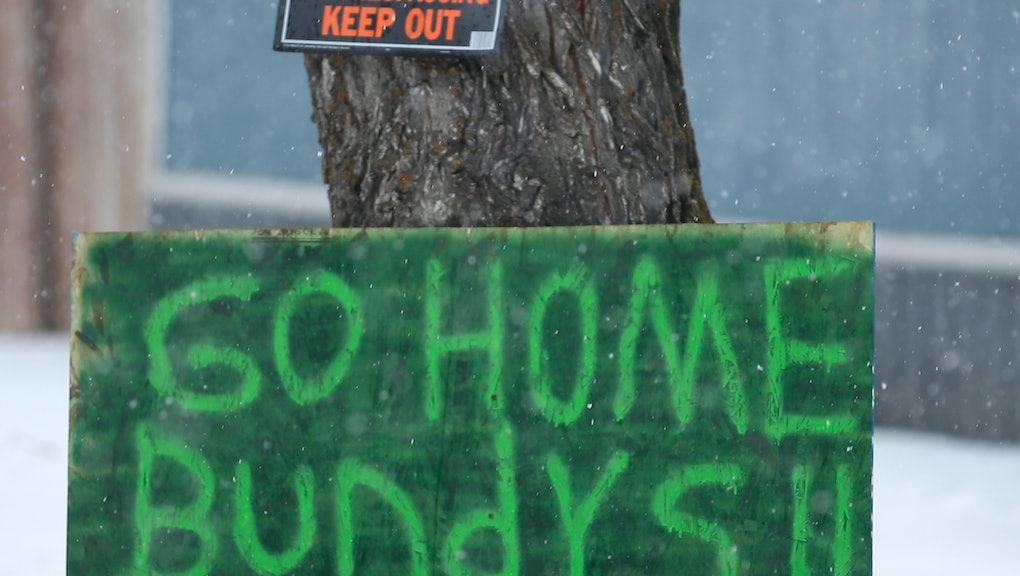 One Map Shows Who Really Deserves to Be Angry in Oregon

Ammon Bundy and the armed ranchers in Oregon have one overreaching goal in its ongoing standoff with federal officials. "Once [the people] can use these lands as free men, then we will have accomplished what we came to accomplish," Bundy said in a video posted to Facebook on Saturday, according to NBC. In other words, they want the United States federal government to back off.

But if there's any group that has a legitimate gripe with the U.S. government over ownership of local land, it's not Bundy's white, anti-government group. It's the indigenous tribes native to the land now known as the state of Oregon.

The above map was posted on Facebook by the group Native Lives Matter to drive home the point on land sovereignty. Leaders in Oregon's native community have also pointed out the irony of the Bundy occupation in recent days. "I'm, like, hold on a minute, if you want to get technical about it ... the land belongs to the Paiute here," Selena Sam, a member of the Burns Paiute Tribe council, told Reuters.

But unlike Bundy's gang, the Paiute haven't decided to grab guns and provoke a standoff because it's precisely that type of violence that forced them off their land in the first place. "I feel like it's happening all over again but to a different set of people," Sam continued. "They're like, 'Let's grab some guns.' We have a different approach."