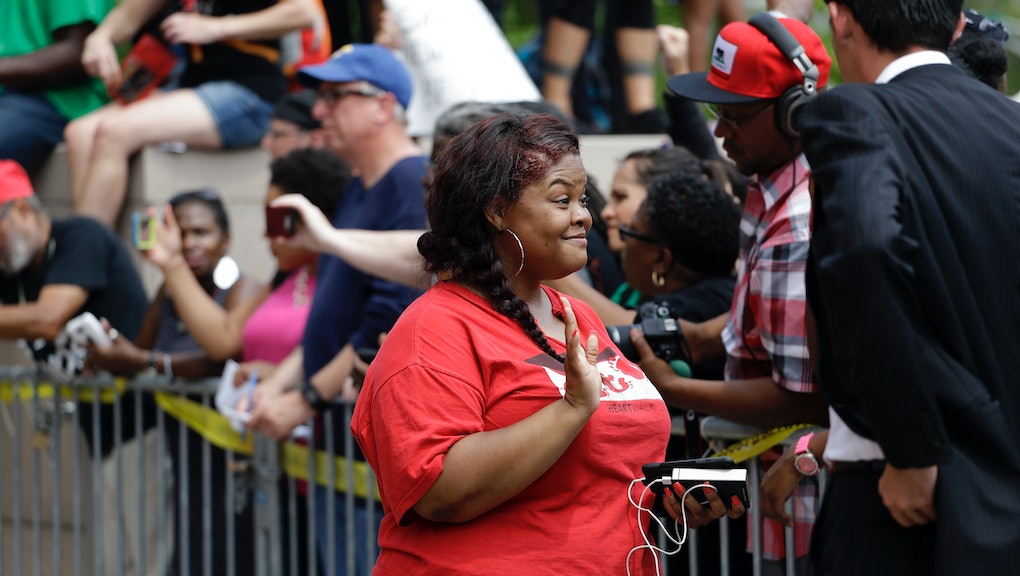 Johnetta "Netta" Elzie, 26, burst onto the national scene in 2014 as Ferguson erupted in flames. A native of St. Louis, Elzie traveled to nearby Ferguson and began tweeting dispatches from the ground, where police clashed violently with protesters. Now, she's one of three young women on the cover of February's "Black Girl Magic" series.

The issue is a special edition of the magazine for Black History Month. Along with Elzie, the magazine also features covers by Black-ish actress Yara Shahidi and Teyonah Parris, who stars in Spike Lee's latest film Chi-Raq.

Elzie, along with DeRay Mckesson, has become one of the most recognizable young black social media activists in the country. In May, both were subjects of a New York Times Magazine profile on how Twitter is transforming civil rights work. In Essence, she opens up about what it's like to be recognized for her often charged work on social media. "We definitely had a huge moment on Twitter over [my public persona and being respectable]. I'm not going to stop cursing for the movement or to make people comfortable," she told Essence. "It, actually, makes me feel a little better when I can throw in a little colorful language every once in a while. I'm a protester. We resist against the police, so I'm not trying to be cordial and polite with someone who's pointing an M16 in my face."

"We resist against the police, so I'm not trying to be cordial and polite with someone who's pointing an M16 in my face." —Johnetta Elzie

In addition to her on-the-ground protesting, she also helped launch an interactive map of police shootings across the country and Campaign Zero, a policy platform aimed at ending police violence. She's also met with Hillary Clinton and Bernie Sanders, this year's leading democratic presidential candidates, to talk about police accountability.

The Essence cover is already catching the attention of some of Hollywood's most influential black stars. Kerry Washington tweeted, "This is what magic looks like."

Elzie's taken a more grounded approach to the honor. "I'm most excited by all my friends [sic] little black girls who know me as 'auntie/TeeTee/Ms. Netta" and get to see this cover + themselves," she tweeted.

The magazine hits newsstands on Jan. 8.