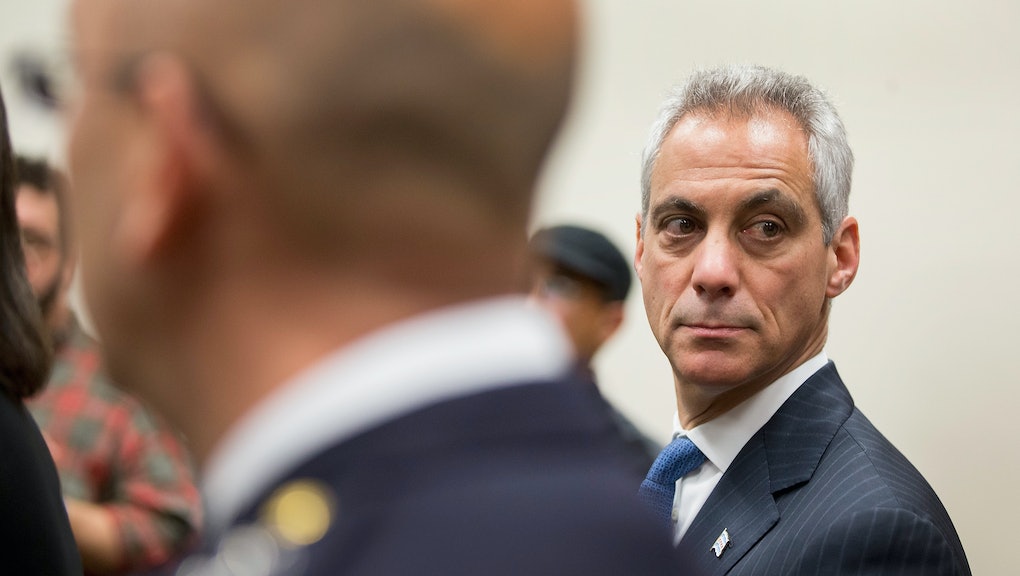 The investigation into what happened to Laquan McDonald, and why crucial evidence took so long to be made public, is growing more tawdry by the day.

McDonald is the 17-year-old black teen who was shot 16 times by Chicago police officer Jason Van Dyke in October 2014. Video of the shooting was captured by a police dash camera but wasn't released until more than a year after the shooting took place. What happened in that year has become the subject of widespread criticism of Mayor Rahm Emanuel, who is currently fighting off calls for his resignation.

Many of those calls stem from what Emanuel did or didn't know about McDonald's shooting before the city agreed to offer the teenager's family a $5 million settlement. Emanuel has repeatedly claimed that he never saw the shocking video footage, but according to new emails obtained by the Daily Beast, Emanuel's close aides at least knew exactly what was on the video and finagled behind the scenes to keep it from the public during a hotly contested mayoral race in which Emanuel was fighting for his political life.

One email from McDonald estate attorney Michael Robbins seems to suggest that Emanuel's office only offered the multimillion-dollar settlement in exchange for the family's promise to keep the video from public view.

"The provision as drafted, that we maintain the confidentiality, of the materials — principally the dash cam video —until the criminal charges are concluded, which could be in effect for years, is entirely unreasonable," Robbins wrote to Thomas Platt, one of the City of Chicago's lawyers, on April 6, according to the Daily Beast. "Nor was any such broad-sweeping confidentiality provision discussed during our meetings."

It would be another seven months until a journalist's lawsuit forced the city's hand to release the video to the public. In the interim, Emanuel won his reelection campaign against challenger Jesus "Chuy" Garcia, a Cook County commissioner who surprisingly forced the longtime political operative Emanuel into a runoff.

That runoff election was proof of many Chicago voters' discontent with Emanuel's first term in office. The mayor closed dozens of schools in the city's black neighborhoods in a district where teachers went on strike for the fist time in more than 20 years. He was criticized for seeming to prioritize downtown investors' interests and oversaw what protesters later called a "culture of corruption" in the city. When the mayor reached out to a coalition of black community organizations asking to meet, to try to quell outrage before the McDonald video was made public, all of them declined.

It was a stunning rebuke of the mayor's power, which seems to be dwindling by the day.