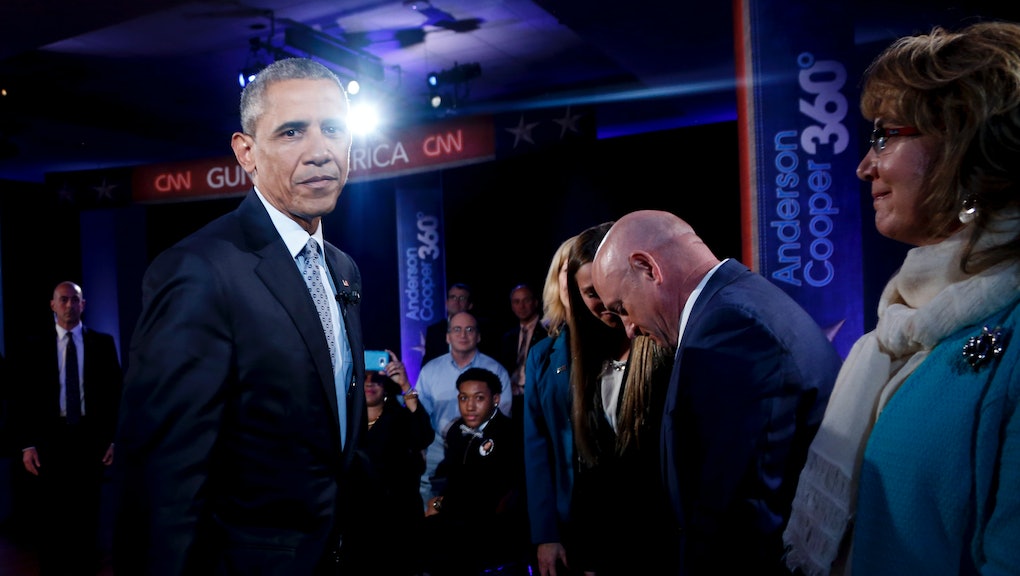 On Thursday, President Barack Obama participated in a CNN-hosted town hall meeting about his executive order on gun control. The action, announced during a White House speech on Tuesday, is the president's strategy to bypass a gridlocked Congress to enact policies that might finally stem America's deadly obsession with guns. In 2015, there were more than 355 mass shootings in the U.S., more than any other developed nation in the world. In his speech, the president acknowledged this fact, citing it as his motivation to push for change.

It was a watershed moment that drew rightful praise from anti-gun violence groups and predictable scorn from gun rights proponents. Obama also acknowledged both in Tuesday's speech, and at the town hall, that in many communities, gun-related deaths are an everyday reality. But after a closer look at the policy proposals, it's not clear which of the proposals in the president's executive order would address this reality. Like every other aspect of American lawmaking, color-blind policies in this instance simply won't work.

The president acknowledged this devastating truth only in passing on Tuesday. When he teared up while talking about the Sandy Hook massacre that claimed the lives of 20 school-aged children and six teachers, he noted, "And by the way, it happens on the streets of Chicago every day."

In 2015, nearly 3,000 people were shot and killed in Chicago. Most of them were black. It's an epidemic that's been brewing for decades. In her 2015 book Ghettoside: A True Story of Murder in America, Los Angeles Times reporter Jill Leovy detailed just how atrocious gun violence has been in black communities. Leovy recounted using government data to find that in 1993, black men in their early 20s in Los Angeles County died by homicide at a rate of 368 per 100,000 population — a rate that was similar to when American soldiers were deployed to fight in Iraq in 2003.

Overall murder rates in major cities have dropped considerably since the early 1990s, but what's remained the same is that black people are still dying in disproportionate numbers as a result of gun violence. This day-to-day violence seldom makes the national news. "Very few of the bereaved were spared the sense that a wider world viewed their loss indifferently," Leovy wrote.

That sense of indifference still resonates. It's why the decades-long bloodshed in Chicago only warranted a passing notice in the president's historic decision to bypass Congress and the notoriously influential gun lobby to finally address guns on a legislative level.

"[Obama] definitely addressed some of the more policy-related concerns and is probably more focused on the massacres we've seen over the past year and a half," Jenn Jackson, managing editor at the Black Youth Project, a Chicago-based advocacy organization, told Mic. "It doesn't address police violence, school closures or disinvestment in communities" that's pushing people toward violence, Jackson said.

The president's executive action itself is meaningful, but still broad. It will increase background checks, expand the reach of the Bureau of Alcohol, Tobacco, Firearms and Explosives, and pour millions more dollars into mental health treatment. Those are all positive steps modeled directly off of the mass casualty tragedies of recent years. But it's important to point out that it's those tragedies that have most moved the general public and lawmakers in recent years. The everyday bloodshed that's swallowed black communities has been mostly left as a footnote.

"When we discuss gun violence, there's this idea that policies have to be colorblind," Jackson said. "But when that happens, we miss the larger picture."