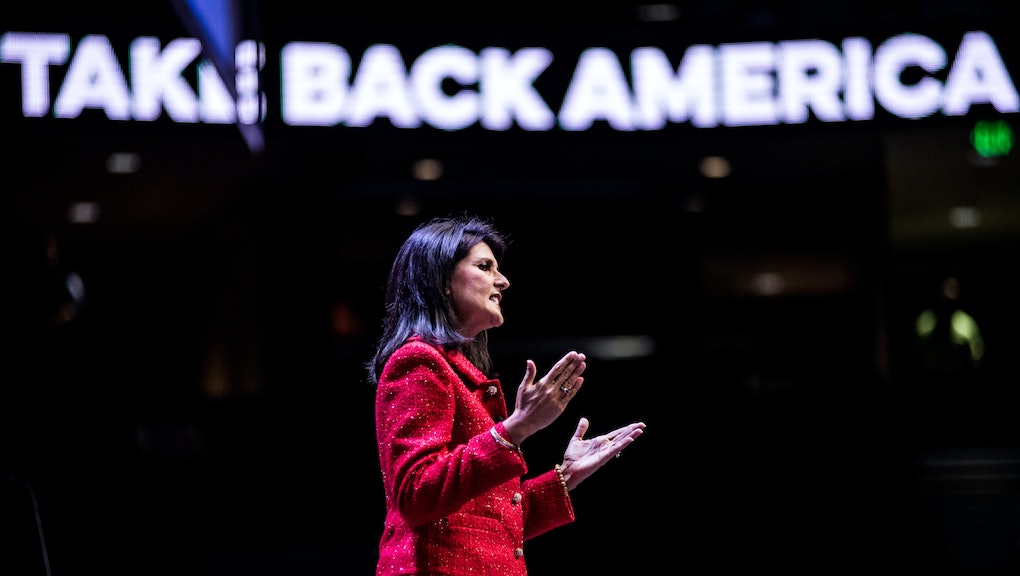 Where does Nikki Haley fit in America's political spectrum? If the last few days are any indication, the answer is nowhere.

On Tuesday, the Republican governor of South Carolina gave her party's response to President Obama's last State of the Union address. In it, she took aim at presidential frontrunner Donald Trump's anti-immigrant, openly hostile rhetoric. "During anxious times, it can be tempting to follow the siren call of the angriest voices," Haley said from the South Carolina State House in Columbia. "We must resist that temptation. No one who is willing to work hard, abide by our laws, and love our traditions should ever feel unwelcome in this country."

Trump responded by doubling down on the anger that's made him an early favorite for the GOP nomination. "I'm very angry because I hate what's happening to our country," Trump told supporters at a rally in Pensacola, Florida.

It's not just Trump who is angry — the GOP base is, too. And the conservative backlash to Haley's State of the Union response has reflected this anger:

Later, Coulter insisted that she was joking. But her point is well-taken: Haley, the American born daughter of Indian immigrant parents, doesn't jibe with the white supremacy that's revealed itself in the heart of the GOP base.

In fact, this contradiction between her identity and a growing, angry, Republican base is apparent in her actions. Just months ago she passed a law that finally removed the confederate flag from the South Carolina State House, and then Wednesday — in response to the current conservative backlash against her — she said that the United States has "never in the history of this country passed any laws or done anything based on race or religion."

She's pandering to two warring perspectives on race within the Republican party. The first thinks that we have overcome our problems with race and that the United States is a shining example of racial harmony (hey Ben Carson!) and the other thinks it's our very obsession with race and political correctness that's dooming us altogether. Neither speaks to the reality or how young people understand race in the U.S.

Haley's her own biggest enemy. She's struggling to develop a narrative on race that sidesteps the racial disparities that are driving the United States' current political conversation. Also, she's not white, and her party's most vocal members will never forgive her for it.