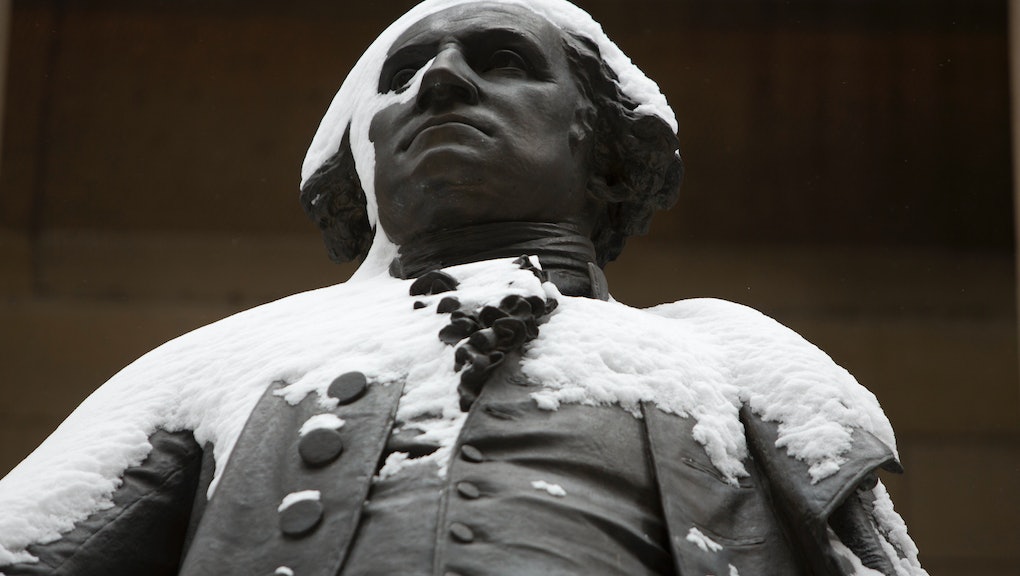 Critics of a new children's book about America's first president have a simple message for its author: You can't have your cake and eat it, too. The author of A Birthday Cake for George Washington is former journalist Ramin Ganeshram, and she's fighting back by reminding readers that history isn't always so simple.

Ganeshram tells a fictional story based on real characters: Washington, his wife Martha, their enslaved cook Hercules, and Hercules' daughter, Delia. In it, Martha Washington wants to make a birthday cake for the president and outsources the task to Hercules and Delia, who happily go on a journey to find one of the cake's missing ingredients. The book ends on a festive note, with both slaves wishing Washington a happy birthday.

Critics say that the book offers an unsettling and sanitized version of slavery. In Washington's case, it's particularly disturbing not only because of his power, but also because of his noted brutality as a slave owner. "Washington expected all his people to work from sunrise to sunset," librarian Edi Campbell wrote in a review. "The closer they worked in proximity to him the more they would be scrutinized."

Fusion's Charles Pulliam-Moore detailed the lengths to which Washington went to make sure that his slaves never knew freedom during his lifetime. He broke a law passed by the Pennsylvania legislature that would grant them freedom after living in Philadelphia for six months, where the White House was then located. "Washington would periodically ship his slaves back to his plantation in Virginia in order to technically 'renew' their Pennsylvania residencies," Pulliam-Moore wrote. Even the book's hero, Hercules, ran away from the White House to his freedom on Feb. 22, 1797, Washington's 65th birthday.

So I find it horrifying that so many are willing to ignore how this book harms the descendants of enslaved black people. It's a candy coated depiction of a multi generational crime against humanity. And the number of harmful myths that this imagery supports & teaches as normal to the apparently white children who are the target audience has a long term impact on how the brutal realities of slavery are downplayed in this country.

Ganeshram is pushing back against the criticism in a response issued by her publisher, Scholastic:

I know these facts from the nearly four years of research I did with the aid of historians, largely, at the National Park Service's President's House site in Philadelphia, where my story is set. We know from first-hand accounts that Hercules was famous in his day as a towering culinarian — admired and in-charge, despite his bondage. My story is further bolstered by my decades of research into American culinary heritage and the complex and varied nature of enslaved existence, particularly in Early Federal America — information used to demonstrate the range of Chef Hercules' skill and brilliance.

Perhaps even more controversially, Ganeshram also advocates for a more nuanced perspective of slavery, not just as an inhumane institution, but one in which slaves themselves found reason to be proud despite horrific circumstances:

In our modern society, we abhor holding two competing truths in our minds. It is simply too hard. How could one person enslave another and at the same time respect him? It's difficult to fathom, but the fact remains it was true. We owe it to ourselves — and those who went before — to try and understand this confusing and uncomfortable truth. To refuse to do so diminishes their history to one-dimensional histories that may give comfort to some but ultimately rob us all of the potential for real understanding.

Despite, and perhaps because of, Ganeshram's defense, the critiques have kept coming on Twitter.