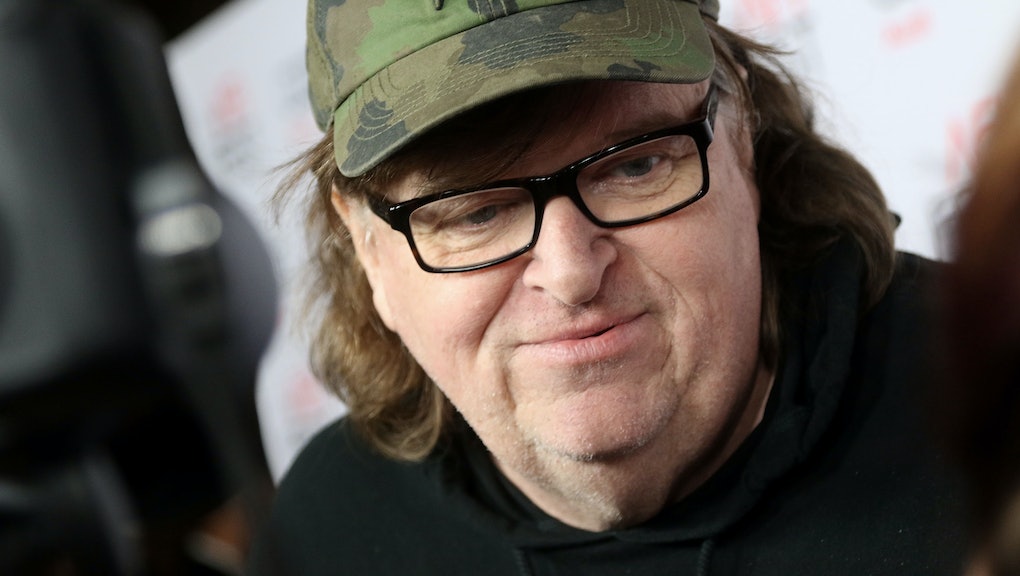 Michael Moore is known for tackling tough subjects, which is especially true when it comes to his hometown of Flint, Michigan. Now, in the midst of a declared state of emergency over the city's man-made water crisis, the award-winning filmmaker is calling out what few others have: that the catastrophe has everything to do with race.

Back in December, before the crisis became big national news, Moore tweeted:

This month, with investigations brewing and more outraged calls for accountability, Moore reiterated his point:

First, some context: Moore rose to prominence in 1989 with his documentary film Roger & Me, in which he chronicled what happened to Flint's once-prosperous economy after the auto industry left. Those who had the means fled the city. Black autoworkers, who'd migrated from the South well through the 1970s, became a majority in the city. Today, more than half of the city's 99,000 residents are black, according to census data. The median household income is only $24,834 — roughly half of the average household income in the state of Michigan.

It's sometimes said that demographics are not destiny, but in Flint, that's not quite the case. In a city whose infrastructure was failing long before this latest catastrophe, black children already had an increased risk of being exposed to environmental toxins like lead.

Lead is a toxin that, when found in excessive levels in children, can lead to long-term neurological damage. In the 1970s, it was banned in food cans, gasoline and other household products. In 1988, Congress passed the Lead Contamination Control Act, which successfully reduced overall lead poisoning cases in the United States. Still, by 2005, African-American children ages one to five were twice as likely to suffer lead poisoning than their white peers, according to the Centers for Disease Control and Prevention. Ten years later, in 2015, a HuffPost analysis found a correlation between cities with high populations of black residents and elevated lead poisoning rates. In fact, Detroit, the city from which Flint had originally piped in its water before opting for a cheaper — and ultimately more deadly — option had high rates of lead poisoning.

According to the National Center for Healthy Housing, "Minority and low-income families are more likely to live in substandard housing and polluted communities, increasing their risk of childhood lead poisoning, asthma, cancer and other environmentally related diseases." What's more: "In addition to being disproportionately affected by disease, minorities often lack adequate insurance and access to health care due to financial and cultural barriers."

New York City, which has a sizable black population, has also struggled in recent years to combat lead exposure in children. According to an analysis by the New York Daily News, in 2012, more than 900 children had tested positive for lead poisoning. Of those, more than 300 showed levels so high that city health inspectors were immediately dispatched to their homes. And of those, most were children of color: 23% were black, 31% were Latino and 26% were Asian.

Matthew J. Chachère, a staff attorney at the Northern Manhattan Improvement Corporation, told the Huffington Post in 2015 about the terrifying long-term aspects of lead poisoning: The damage is "irreversible."

Unless, of course, you are decision-makers in Flint, Michigan.