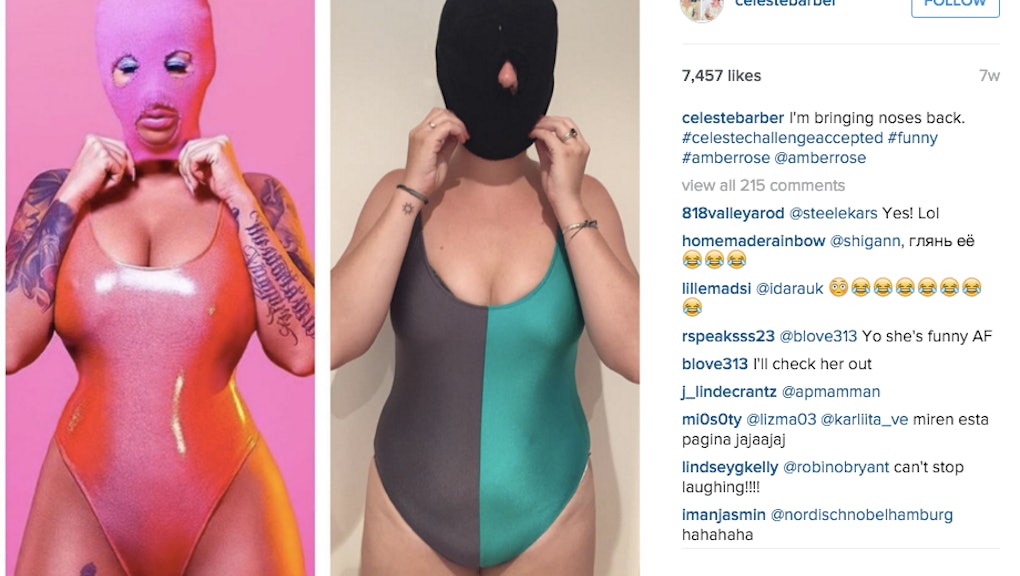 Who Is Celeste Barber? Meet the Woman Mocking Instagram Celebs in Hilarious Ways

Who is Celeste Barber? Per her Instagram account, she's an "Actor Comedian Writer Lady" who excels at skewering the smoke-and-mirrors world of celebrity social media, and whose #celestechallengeaccepted project has won her the internet's attention.

"Some celebrities on Instagram seem to think we non-rich, non-privileged people are idiots and believe that what they are posting is real," Barber told BuzzFeed Life. "I wanted to try to show how ridiculous it would be for a 'normal' person to recreate some of these photos."

Barber tries and succeeds. Acting as model, she recreates the outlandish "lifestyles-of-the-rich-and-famous" photos posted by such stars as Kim Kardashian West, Kendall and Kylie Jenner, Miranda Kerr and Beyoncé. She juxtaposes her shots with their more famous, heavily edited originals, highlighting the very wide gap between real-person fact and Instagram fiction. Celebrities are not just like us.

They have dedicated selfie stations for the meticulous crafting of purportedly casual posts, for example. They can earn four-to-six figures for posing with a product and sharing the photo on social media. They put some truly baffling things out there in the internet world, and luckily for us, Barber is prepared to go after all of them.

For example, here's a perfectly made-up Kendall Jenner, her hair arranged in a halo of hearts as she slumbers in what may or may not be a wedding gown. As one does. Jenner vs. Barber — who wore it best?

Lady Gaga engaging in some water-sport-slash-human-origami. Casual for her, maybe, but tricky for normals.

Kim apparently wakes up flawless and photo-ready. Barber — and most people — wake up like this.

When you're a celebrity, you have access to more interesting props. You have handlers to keep the chickens subdued. These advantages are simply unfair.

TFW you're Kim Kardashian and you're dipped in silver and lounging in a pool of paint. So relatable.