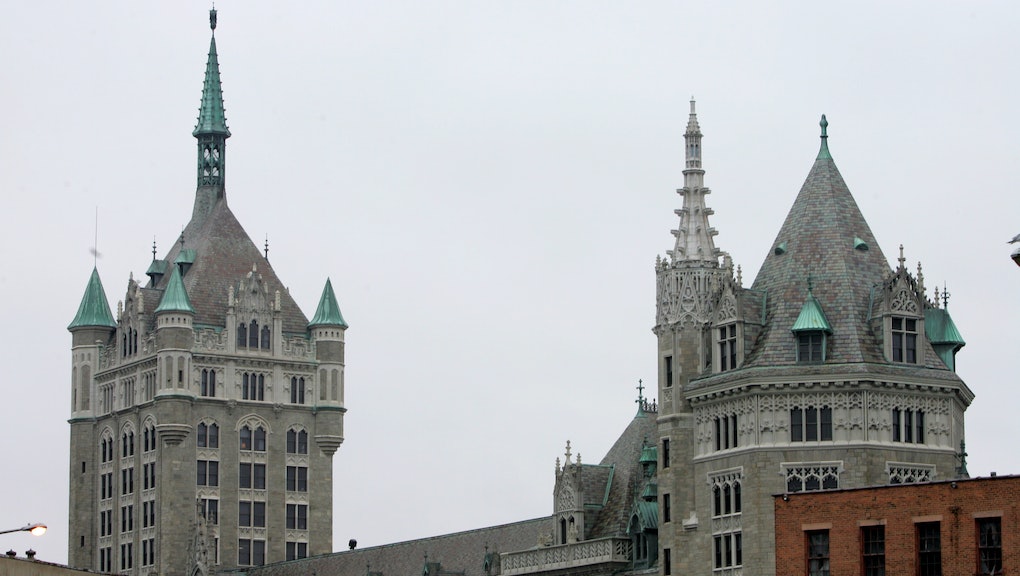 It was well after 10 p.m. on Friday when Asha Burwell — a senior at the State University of New York at Albany — sent out a tweet that would rattle her campus in upstate New York and showcase just how quickly students can rally their classmates:

Burwell has declined to talk with reporters about the incident, but she did describe what happened on social media: She and two friends, also black women, were verbally and physically assaulted on a local bus by close to a dozen white riders. The alleged assault, which is being investigated by both local and campus authorities, began as the public bus was traveling off campus and then proceeded as the bus made its way onto campus property, Karl Luntta, the university's director of media relations, confirmed to Mic. Two of the women involved were treated for minor injuries at a local hospital.

The school's president, Robert J. Jones, issued a statement on Saturday. "I am deeply concerned, saddened and angry about this incident," the statement read, in part. "There is no place in the UAlbany community for violence, no place for racial intolerance and no place for gender violence."

The next day, J. Frank Wiley, the school's chief of police, also issued a statement. "The investigation is still in its early stages," Wiley said. "The criminal justice process requires us to be detailed and thorough. That takes time. We are committed to sharing information with the community on a regular basis, but we ask for your support both in bringing forward any information you have and by giving us the time we need to talk with all those involved."

The university has also encouraged students to seek support at the campus multicultural center and the gender and sexuality resource center.

Administrators and police reiterated those calls for patience in phone calls with Mic. "It is our duty to be detailed and thorough, and that will take some time," Luntta said.

Steve Smith, a spokesman for the Albany Police Department, also said the investigation will take time. "Right now we're working with the University of Albany police, and this is a joint investigation to determine when and where this incident may have happened," Smith told Mic. "We're also working with Capital District Transportation Authority to review video."

While police began investigating the incident, word of it spread faster than ever on campus and social media. Over the weekend, the hashtag #DefendBlackGirlsUAlbany began spreading on Twitter and Instagram, with people on and off campus voicing their outrage over what little was known to the public. Campus activists are also planning a rally for Monday evening.

"The rally is happening because we're outraged that hate crimes are occurring on our campus, and we want to ensure this doesn't happen again," Adanna Perry, a 19-year-old sophomore at the school, told Mic.

For some longtime observers, Albany is the latest school to showcase just how powerfully students can leverage social media to make demands of administrators who they accuse of ignoring racially hostile campus environments.

"I'm an [University of Albany] alum, [former] Black Student Union president, community member and recently moved back to Albany, so I don't feel like this is exceptional," Rosa Clemente, a longtime activist and former Green Party vice presidential candidate, told Mic. Clemente described instances on campus in the early to mid 1990s in which students of color complained about being targeted with racial epithets and physical assaults.

"The thing now is the young folks who are attacked on college campuses no longer have to wait to go through a judicial process of a college administrator. They're controlling their own narrative," she said.

Ariela Perez-Wallach, 25, just graduated from the University at Albany in 2015 and recently co-founded a Black Lives Matter chapter in upstate New York. She said her activism started after she was one of several women who were victims of a peeping Tom who installed cameras in local bathrooms to spy on women. "I really fought very hard to have video cameras somewhere in the building [to catch the perpetrator] ... and they pretty much ignored me," she told Mic. "[The university] really tried very hard to push it under the rug so people wouldn't hear about it. I'm really concerned this is going to happen."

Now, "It's going to be harder to push [this incident] under the rug," Perez-Wallach said, "because national attention has been given to it."