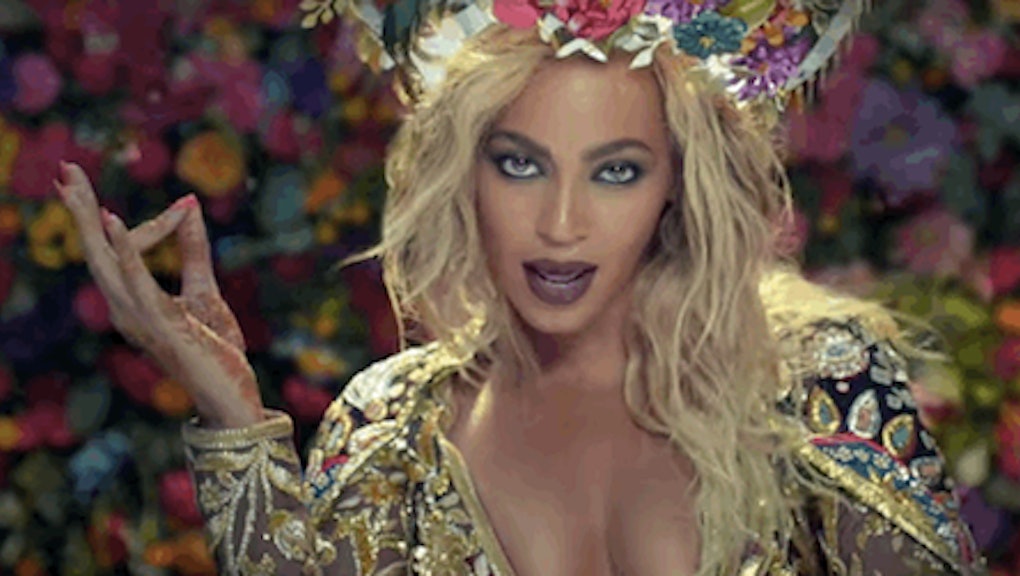 What Is or Isn't Cultural Appropriation? Let's Look at Coldplay and Beyoncé's Latest Video

Did Beyoncé appropriate Indian culture in Coldplay's new video, "Hymn for the Weekend?"

Say what you will about the African presence in Indian culture, Beyoncé Knowles is an African-American woman who grew up in Houston. She's not celebrating a culture that she grew up in. Neither is Chris Martin: Coldplay's lead singer, a white English musician who was born exactly 30 years after India gained its independence from Great Britain, who is the new music video's protagonist. Madonna, Selena Gomez and Gwen Stefani have also been called out for cultural appropriation when they wore bindis.

But is that appropriation wrong? That's the question that viewers are grappling with most. And it's a fine question, but it also misses the point: Discussions about cultural appropriation aren't just about who has the right to wear what they want. They're fundamentally about power — in this case, the power to deem what and who is worthy of celebration in the first place.

In an otherwise beautifully shot and edited video, it's a seconds-long cameo appearance by Bollywood actress Sonam Kapoor that most powerfully proves this point. The award-winning, 30-year-old actress has starred in more than a dozen films since 2007 but is virtually unknown by most viewers in the United States. That is itself a statement about Bollywood, which is still a niche market that caters specifically to millions of moviegoers in India and the millions more who live in countries spread across its diaspora.

Beyoncé and Coldplay are two of world's most powerful entertainers, and the likelihood of a person in India not knowing who they are is probably pretty slim. That power isn't just about money. It's about influence. Even if you accept that the video was written, directed and created with the best intentions, you also have to accept that those intentions were to have two non-Indians show the world just how beautiful India's culture truly is. And sure, that's fine, but entertainers like Kapoor have already been doing that for nearly a decade.

The video's timing is also important. It comes just as Hollywood is grappling with the fact that no black actors were nominated for its most prestigious award. But if the industry is tough for black actors and entertainers, it's damn near impossible for people of Asian descent. Comedian Aziz Ansari had to cast his own parents in his hit Netflix series Master of None because there were so few South Asian actors who could play the roles. Actor Daniel Wu was born and raised in California but had to move to Hong Kong to find success. Hollywood is routinely accused of whitewashing roles for Asian actors — think The Last Airbender or The Martian.

So are Beyoncé and Coldplay bad people? No, but that's not the question. They are hugely successful musicians who may have unintentionally shed light on just how Hollywood sees India and its entertainers, which is to say not at all. Failing to meaningfully include those entertainers runs the risk of making invisible the very communities from which they're drawing their inspiration.