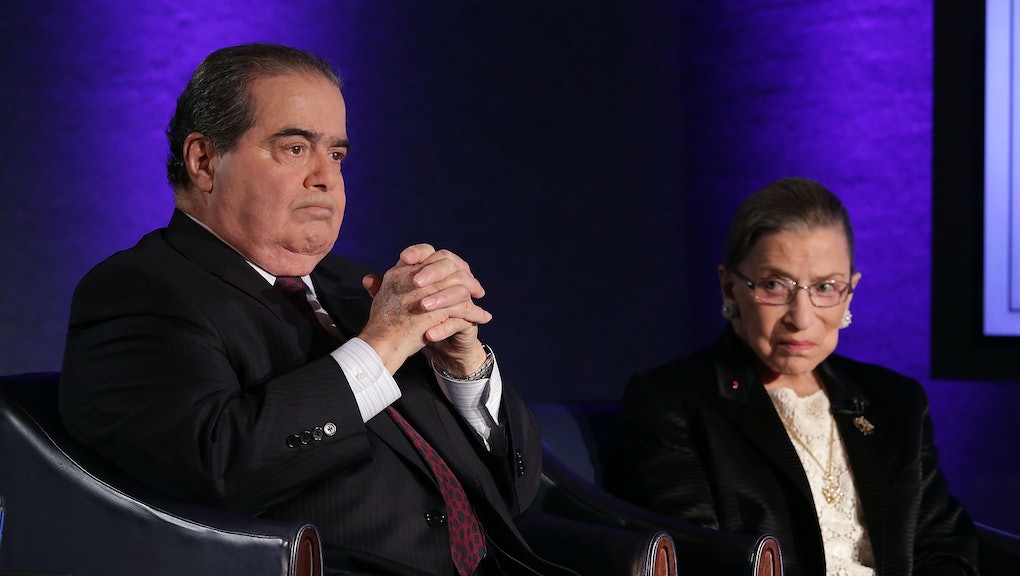 What they say is true — opposites attract. And that case is definitely true for colleagues and friends Justice Antonin Scalia and Justice Ruth Bader Ginsburg. Though they were on different ends of the ideological spectrum — he, a staunch conservative, she a steadfast liberal — their friendship superseded those categories.

Though they sparred over almost every case to come to the Supreme Court, they both loved to laugh, opera and each other. She calls him "Nino," and today, we know she misses him.

They knew they were an odd couple.

"Why don't you call us the odd couple?" Scalia said to a Washington audience one night when the two came together to discuss the constitution, CNN reported.

At the core of their disagreements was their opposing view of the U.S. Constitution as "living" — open to interpretation for a modern era, which Ginsburg believes — versus "enduring" — it means what the Founding Fathers say it meant, Scalia's position.

They went on many vacations together, including one where they rode elephants.

At the same event, Ginsburg spoke of another time the pair rode elephants together in India. Ginsburg called it a "bumpy ride," but Scalia remembered some of the backlash Ginsburg got from her inner circle.

"Some of her feminist friends gave me a hard time because she rode behind me on the elephant," he said. But, Ginsburg joked, "The driver explained it was a matter of distribution of weight."

Scalia told eventgoers about the many times they vacationed together, including one time they went parasailing in the South of France together.

"Ruth — honest to goodness — went up behind a motor boat," he said, "I mean she's so light you would think she would never come down. I would not do that."

They had ideological differences, but also had similar backgrounds.

With March birthdays only four days apart — Scalia was March 11, Ginsburg on March 15 — both also grew up in New York City, Scalia in Queens and Ginsburg in Brooklyn. Scalia graduated from Harvard Law School, while Ginsburg attended Harvard for two years before transferring to Columbia University. They got to know each other much better when they worked together on the U.S. Court of Appeals, which is often seen as a step to the Supreme Court.

They both love opera.

"She likes opera, and she's a very nice person. What's not to like?" Scalia once said of Ginsburg. "Except her views on the law." According to USA Today, their love of opera allowed them both to appear as extras in Washington Opera's 1994 production of Ariadne auf Naxos. Their love of opera came to a head when their friendship became the subject of a one-act opera Scalia-Ginsburg.

The pair had spent every New Year's Eve together — for the last two decades.

As best friends, Ginsburg and Scalia did everything that best friends might do. And that meant finding ways to spend the holidays together. The friends and their spouses have spent the night together for the last few decades, meaning New Year's Eve 2016 may be a hard night for Ginsburg.

She was his first choice to be nominated for the Supreme Court, regardless of ideology.

According to the Los Angeles Times, a long-circulating story is that, when it was time for President Bill Clinton to appoint someone to the court, one of Scalia's clerks asked him during lunch whether he'd want to see Mario Cuomo or Laurence Tribe, both potential candidates, join him on the bench.

He wrote her profile for Time's "100 Most Influential People."

Of Ginsburg, he wrote, "Having had the good fortune to serve beside her on both courts, I can attest that her opinions are always thoroughly considered, always carefully crafted and almost always correct (which is to say we sometimes disagree). That much is apparent for all to see.

What only her colleagues know is that her suggestions improve the opinions the rest of us write, and that she is a source of collegiality and good judgment in all our work."

Even when she disagreed with him, she was captivated by him.

Do you remember the first time you met your best friend? Ginsburg recalled seeing Scalia speak at an American Bar Association event and while she disagreed with his overall thesis, she said he argued his point "in an absolutely captivating way."

A few people spoke about their friendship on Twitter, as well.