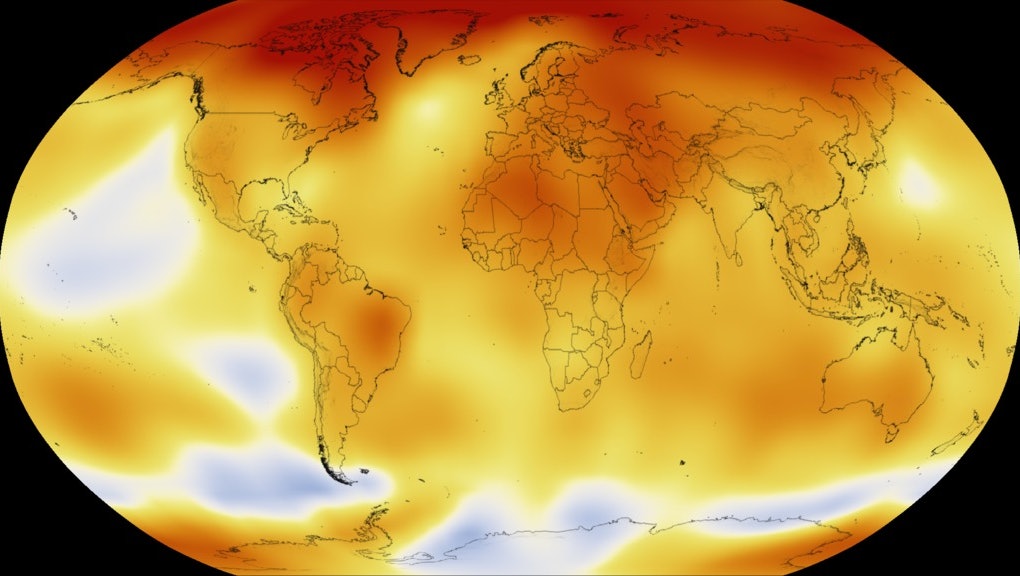 Opinions on climate change vary, but there are a few indisputable facts that are hard to ignore. Carbon dioxide is a greenhouse gas that traps heat in our atmosphere. Burning fossil fuels releases carbon dioxide. Humans have burned a lot of fossil fuels over the last couple centuries, which in turn has released more carbon dioxide into the atmosphere, and global temperatures have risen. Ice and glaciers have shrunk significantly in the last few decades, and sea levels have risen almost seven inches in the last century.

Now you can see some of these climate change effects in a chilling interactive, created by NASA, called the Climate Time Machine. It shows how temperature, carbon dioxide, sea level and sea ice on Earth have all dramatically changed over time.

In the first section, you can see how global temperatures have risen from 1884 to 2015. Blue colors represent cooler temperatures, while red and yellow symbolize warmer ones:

From 2002, you can see how much carbon dioxide has been added to the atmosphere. Green represents less, while yellow represents more:

There's also a sea ice and sea level interactive that shows how the Earth could be affected if too much ice melts.

NASA's climate change research programs have faced a lot of challenges due to one man: presidential candidate Ted Cruz, an open climate change denier, who was made chairman of the Senate subcommittee that oversees NASA. In 2015, Cruz advised that NASA was ignoring its core mission of space exploration by focusing on Earth science. But NASA maintains that one of its most important functions is to study Earth, especially climate change.