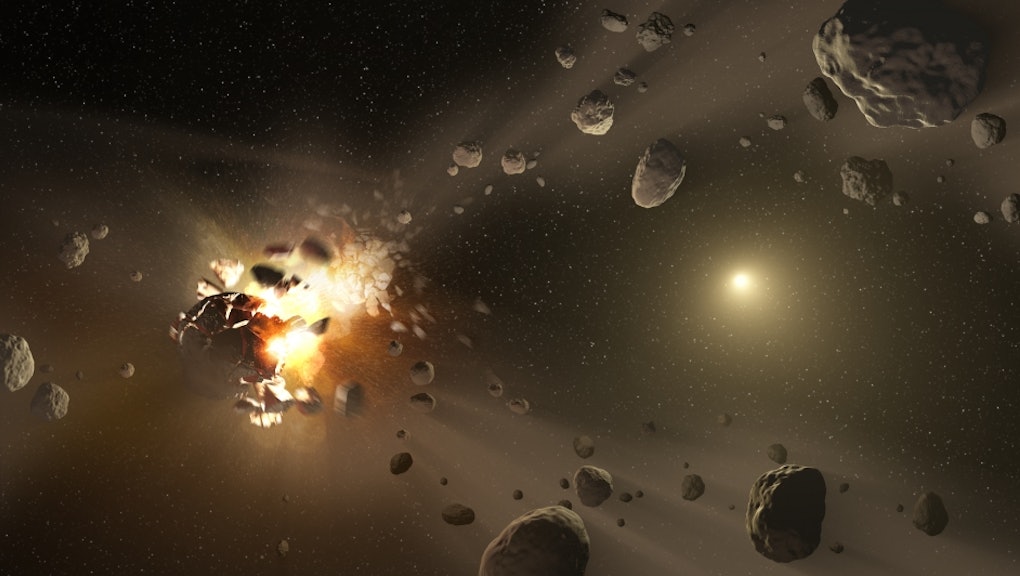 Russia is reportedly developing long-range nuclear weapons called upgraded intercontinental ballistic missiles, or ICBMs. What for? Oh, just a casual round of blasting the crap out of asteroids orbiting near Earth.

Sabit Saitgarayev, a lead researcher at the Makeyev Rocket Design Bureau that's developing the missiles, told the Russian news agency TASS that the team has already picked out a target. The researchers plan to test the weapons on an asteroid called Apophis that will pass by Earth in 2036.

ICBMs had the world on edge during the Cold War standoff between the U.S. and Russia, and now Russia wants to make the technology even more powerful.

Saitgarayev said missile designs are already underway, but it's unclear whether or not Russia has permission or enough funding to do this, TASS reports.

Why asteroids? While this announcement might be a little unsettling, asteroids actually pose a serious threat to Earth, and we do need to figure out a way to stop them from crashing into our planet if one ever heads straight for us.

Right now there are 1,682 asteroids around Earth that are close enough for NASA to consider them "potentially hazardous."

Just to give you an idea of how many asteroids are out there, this animation shows all the asteroids we've discovered since 2012 (there are more now). The asteroids that cross Earth's orbit are red, the ones that cross the orbit of Mars are yellow and those in the Asteroid Belt are shown in green:

An asteroid impact is pretty unlikely. But if a large enough one ever struck Earth, it could flatten cities and cause global environmental disasters.

"With an average interval of about 10,000 years, rocky or iron asteroids larger than about 100 meters would be expected to reach the Earth's surface and cause local disasters or produce the tidal waves that can inundate low-lying coastal areas," according to NASA. "On an average of every several hundred thousand years or so, asteroids larger than a kilometer could cause global disasters. In this case, the impact debris would spread throughout the Earth's atmosphere so that plant life would suffer from acid rain, partial blocking of sunlight, and from the firestorms resulting from heated impact debris raining back down upon the Earth's surface."

That's why NASA is starting to take the threat seriously. It recently created the Planetary Defense Coordination Office to track asteroids, warn us of any that come close and work with the Federal Emergency Management Agency and the U.S. Department of Defense to figure out what to do if an asteroid ever heads directly toward our planet.

Nuking asteroids would put us in danger of weaponizing space. NASA has tossed around the idea of using nuclear weapons to knock asteroids off course. However, the international community seems to agree that it's a bad idea.

The United Nations Outer Space Treaty prohibits the presence of nuclear weapons or military bases in space. Space is meant to be shared by everyone, and space exploration should be conducted peacefully, according to the treaty.

There are other ways we might be able to protect Earth from asteroids. For example, NASA has also proposed using the gravitational pull of space probes to slowly tug asteroids off potential collision courses with Earth.