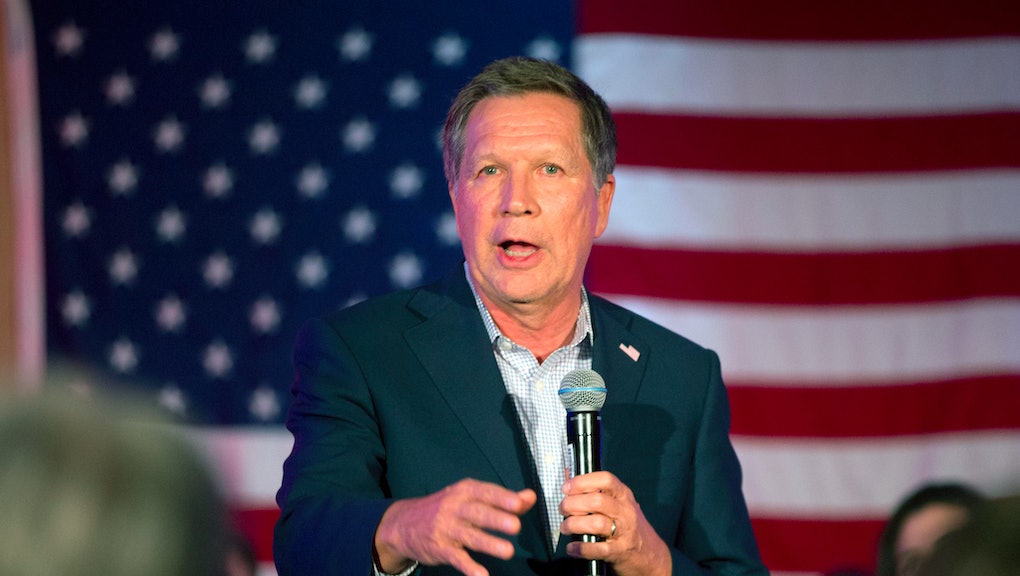 Another day, another horrifying attack on American women's ability to control their own bodies. On Sunday, supposedly "moderate" Ohio Gov. John Kasich signed a bill largely defunding Planned Parenthood in his state, according to the Huffington Post.

The bill, which redirects about $1.3 million of state funds from Planned Parenthood to health centers that don't perform elective abortions or contract others that do, is set to become law in 90 days, Cleveland.com reported. But these clinics used these now-eliminated funds for cancer screenings, sexual education programs, infant mortality prevention and other health programs.

"John Kasich is proudly eliminating care for expectant mothers and newborns; he is leaving thousands without vital STD and HIV testing, slashing a program to fight domestic violence, and cutting access to essential, basic health care," Planned Parenthood president Cecile Richards said in a statement, according to the Huffington Post. "It's clear Kasich has no regard for women's health or lives, and will stop at nothing to block health care for the tens of thousands of Ohioans who rely on Planned Parenthood."

Kasich has taken action against women's health care services before. The governor "[made] life hell for women seeking abortions," Mother Jones reported in 2015, by enacting 16 anti-abortion measures since entering office in 2011. These measures have included prohibiting state-funded rape crisis counselors from helping women obtain abortions and cutting the number of abortion providers in the state in half.

"Life is a gift from God and one way that we express our ongoing gratitude for it is by respecting it," Kasich said in 2011 after signing one late-term abortion ban, Cleveland.com reported at the time. "This bill does that in a very fundamental way, and I'm proud to have signed it into law."

Kasich isn't the only white, male politician making Ohio increasingly inhospitable to women who value their right to choose. In December, Ohio Attorney General Mike DeWine charmingly accused Planned Parenthood of "inhumane" activity, and several Republican state representatives introduced a bill that would require women who have had abortions to indicate whether they would prefer to cremate or bury their aborted fetus.

Yet as one recent New England Journal of Medicine study showed, defunding Planned Parenthood hardly helps women, instead producing outcomes counterproductive to their well-being. In areas where clinics closed in Texas, the study showed, prescriptions for some of the most effective birth control options declined while birthing rates increased.

The very basic bottom line — the same one women across the country are surely growing tired of repeating to the willfully ignorant men empowered to make political choices about their bodies — is that restricting women's access to abortion is not the benevolent act those same politicians make it out to be.