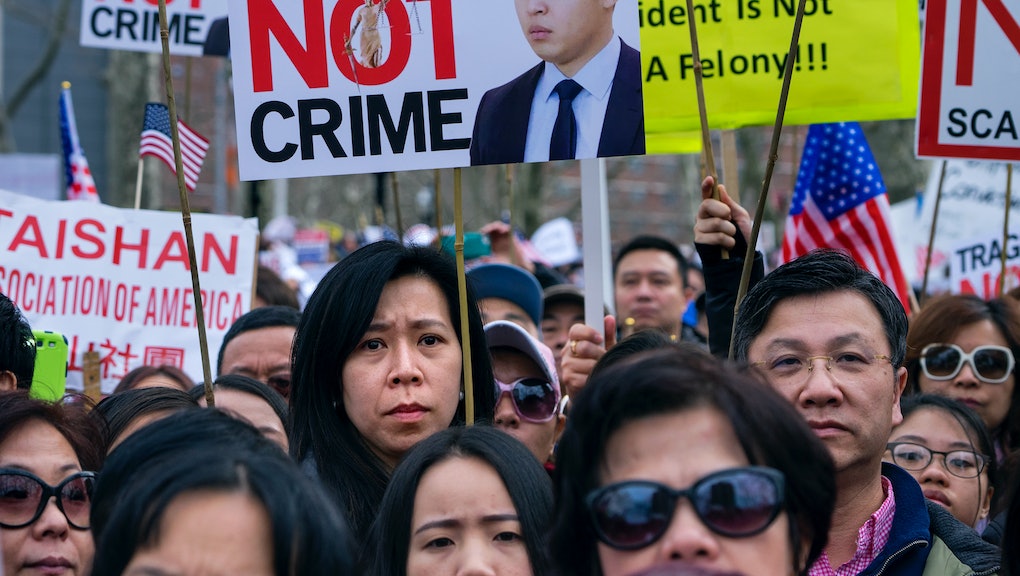 There is no doubt that former New York City police officer Peter Liang shot Akai Gurley in a darkened Brooklyn stairwell around Thanksgiving 2014. But the extent of his culpability has created outrage among some Chinese-American communities.

Gurley was unarmed at the time of the shooting, which Liang, then a rookie officer, later described as an accident.

He faces up to 15 years in prison. Gurley's death became yet another rallying cry in the black community's frustration with police. It's that anger that led thousands into Manhattan's NYPD police headquarters on Saturday in response to Liang's conviction.

The two groups clashed in Cadman Plaza. One group came out in Liang's defense:

Another staged a counter protest to reinforce the importance of his conviction:

"I think both Akai Gurley and Peter Liang are victims of a system that failed," Gordon Zhang, of the Long Island Chinese American Association, told NBC News.

The discord is not new. Liang's trial and conviction quickly became a referendum on race in the city. Shortly after he was charged in February 2015, supporters petitioned the White House to have his charges dropped, arguing that he was being unfairly scapegoated. "The circumstances surrounding Mr. Gurley's death lead to a manslaughter indictment ... whereas police officers in the Michael Brown and Eric Garner case were never charged," the petition read. "Criminal charges appeared more likely in the later two cases, but these two non-Asian police officers were never charged."

It is precisely because of this animus that one well-known Asian-American group, CAAAV: Organizing Asian Communities, took the controversial step of publicly supporting Gurley's family. "Just because it's an Asian cop doesn't mean that he shouldn't be indicted," one organizer with the group, Meejin Richart, told Mic before the conviction. "In fact, all cops need to be held accountable when they brutalize and kill communities that they're paid to protect."

That stance has led to plenty of backlash. In a letter circulated the week after Liang's conviction, the group wrote, "In the days since the jury's decision, CAAAV: Organizing Asian Communities, which has supported the family of Akai Gurley, has received threats and experienced significant harassment from some who disagree with its stance in this case."

For some, the undercurrent of the case has much to do with the so-called "model minority myth," which paints Asian-American achievement as an aspirational goal for other communities of color.

"Look, Asian-American advocates don't get to have it both ways," writer Arthur Chu argued at Fusion. "You don't get to use the language of solidarity and collective political action and then try to use that to defend an individualistic meritocracy."

Progressive Chinese-American organizations from across the country are now weighing in. "As a 39-year-old civil rights organization, we are the first to agree that Chinese, Latino and black officers face racial discrimination in police forces across the country," leaders of the Boston-based Chinese Progressive Association wrote in a statement sent to Mic. "But," the group wrote, "if we believe in racial justice, we cannot excuse an officer for killing an innocent, unarmed black man and failing to provide medical help — just because he is Chinese like us."

The court battle is far from over. In documents obtained recently by the New York Daily News, Liang and his attorney contest "the alleged incident and damages, if any, were wholly or in part caused by the culpable conduct" of Gurley.

"I think the model minority myth implies that Asians are special or better than other ethnic groups," Shiu-Ming Cheer, with Chinatown Community for Equitable Development, told Mic. "From our perspective, any officer who's involved in killing another person, especially a black person, should be held accountable. There's larger systemic racial issues at play in the sense of why white cops aren't prosecuted for similar killings, but that doesn't meant that we shouldn't hold this officer accountable for his actions."