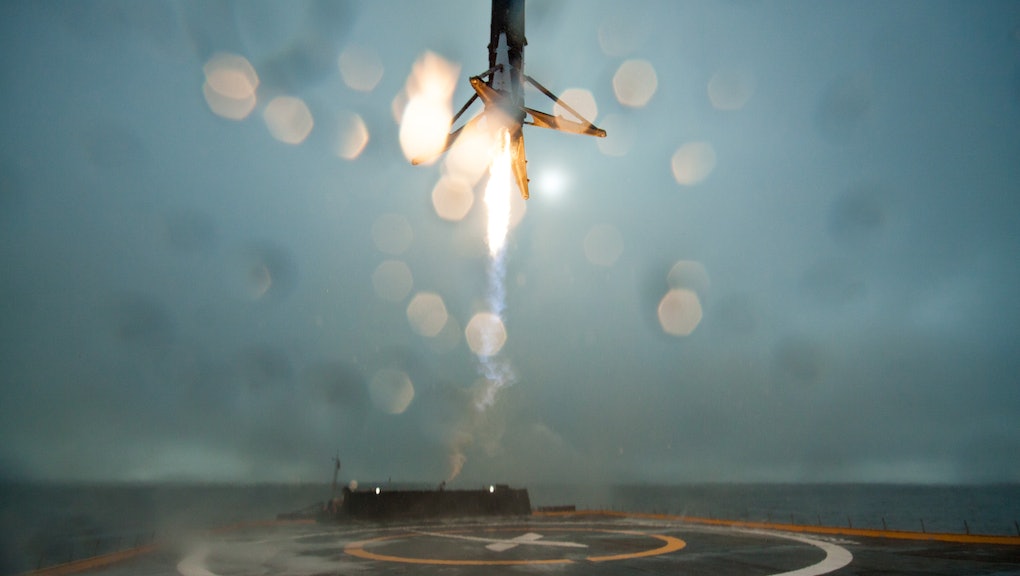 Elon Musk's rocket company, SpaceX, will make its fourth attempt to land one of its Falcon 9 rockets on a drone ship Wednesday.

While SpaceX did pull off a successful landing in December 2015, what's next is a much more difficult feat: It must land its rocket on a moving target that's floating in choppy seas.

But on each landing attempt at sea, SpaceX has gotten closer:

SpaceX probably would have stuck that last landing if one of the rocket's legs hadn't snapped.

Before the landing, SpaceX will deliver a telecommunications satellite called SES-9 into space, where it will jettison and then slowly make its way into geostationary orbit around Earth. Once a satellite like this one gets dropped off by the rocket, it can take several months for the satellite using its own, much slower propulsion system to reach its target height of 36,000 kilometers, according to Space News.

Will it land? This launch was originally supposed to happen back in September 2015, so in the interest of keeping things on schedule, SpaceX has agreed to change the Falcon 9's flight path and drop off the satellite closer to its final destination. The satellite will have less distance to cover on its own.

But reaching a higher altitude means the odds are stacked against a successful landing.

For one, the rocket will be heavier because it needs more fuel to reach a higher altitude. It will have to travel much faster to get to such a high orbit. And it will have less room for the fuel needed for the landing maneuver.

All this means "a successful landing is not expected," SpaceX said in a statement ahead of Wednesday's launch.

Why this test really matters: SpaceX has pulled off the land-based landing, but certain types of high-velocity launches require a sea-based landing.

Still, it'll be good practice for the company that wants to revolutionize spaceflight by designing reusable rockets that will dramatically reduce the cost of launches. Each Falcon 9 rocket costs about $60 million to make, so rather than throwing away $60 million every launch, Musk wants to recover the first stage of the rocket by guiding it back down to Earth and then reuse it. That way the company only has to pay for a few replacement parts and the cost of rocket fuel (about $200,000) for each launch. Using reusable rockets, American spaceflight could hypothetically save millions of dollars.

Even though the odds are not in SpaceX's favor tonight, we've still got our fingers crossed.