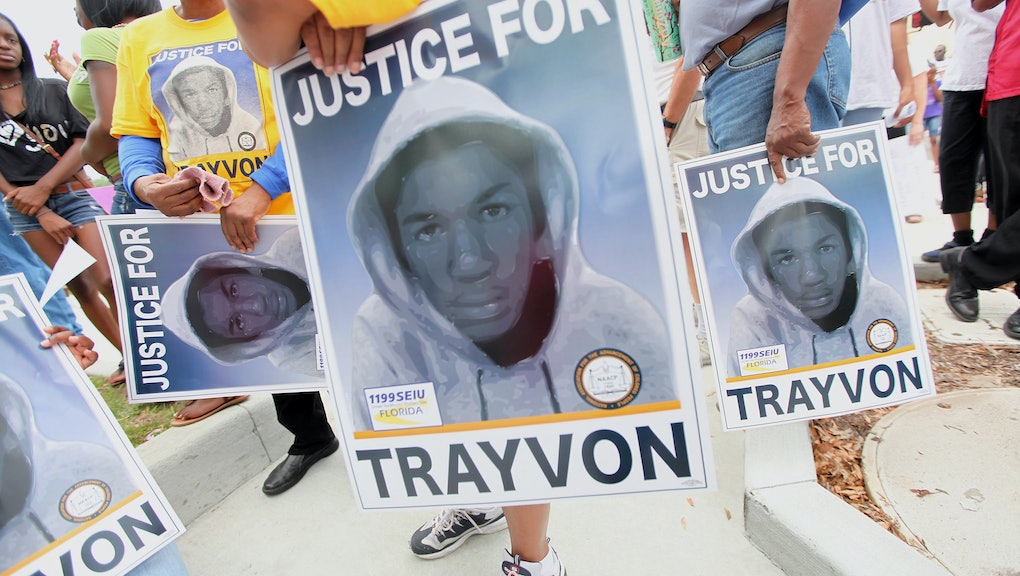 The details of his death still provoke outrage in black communities across the United States. Martin, 17, was walking through the streets of a predominantly white neighborhood in Sanford, Florida, armed with only a pack of Skittles and an Arizona iced tea when George Zimmerman confronted him. A neighborhood watchman, Zimmerman wound up drawing his weapon and fatally shooting Martin, actions for which he was later indicted and then acquitted.

Martin's death has inspired a broad call for justice that stretches from the campaign trail to courthouses in Florida and beyond.

Shortly after Zimmerman's acquittal, a community group called Dream Defenders rose to national prominence by staging a month-long sit-in at the Florida Capitol building in Tallahassee. They were calling on Gov. Rick Scott to call a special session of the state Legislature to discuss the controversial Stand Your Ground law, which was discussed at length by advocates immediate following Martin's death.

When Scott refused to hear the group's concerns, they vowed even more action.

"Gov. Scott, through his inaction, created a new group of leaders who will have a lasting effect on Florida," Florida Rep. Alan Williams, told the Miami Herald at the time.

Since then, the group has shifted its focus to local community efforts. In Florida, two-thirds of black children live in households that are considered low-income, meaning a family of four earns less than $44,100 per year, the Orlando Sentinel reported in 2012.

"I think the things we want to do which is transform this state from a state that's pro-corporation, pro-development, into a state that respects the people in the communities that Trayvon is from," Umi Selah, the group's director, told Mic. "We needed to have a base of infrastructure of people who can do that."

In order to build that base, the group has stepped away from the limelight of high-profile actions and instead focused on door-knocking, house meetings and community forums to address what Selah calls "survival needs."

"If someone's hungry or don't have a job, they don't want to hear about aspirational plans for freedom," Selah said.

Martin's family has been at the forefront of political activism geared toward grappling with gun violence. That activism includes a network of organizers and ordinary people who have taken to the streets and have vowed to take their concerns to the ballot box.

Nearly four years to the day that her teenage son was gunned down by a neighborhood watchman in a Florida suburb, Sybrina Fulton sat atop a stage in South Carolina with Hillary Clinton. She was there as part of a town hall meeting to discuss gun violence before the state's Democratic primary vote, and the symbolism of Fulton's appearance wasn't hard to miss. She is the face of grieving black mothers in America who have lost children to gun violence.

She also happens to be part of a political powerhouse.

Fulton is one of several grief-stricken black mothers who have publicly endorsed Clinton in recent months, but she is by far the most prominent. "The rising generation of our young people need a president who will stand up to inaction from Republicans and indifference from the National Rifle Association," Fulton wrote for CNN. "I believe that person is Hillary Clinton."

"I would like to see young black men treated justly and humanely. We are not disposable."

In an address to the National Urban League in Philadelphia in 2013, Fulton said her son's death magnified the issues that face countless young black people in America. "My message to you is please use my story, please use my tragedy, please use my broken heart to say to yourself, 'We cannot let this happen to anybody else's child,'" Fulton said, according to CBS News.

When asked about what he hopes to see in the future, Martin's brother, Jahvaris Fulton, drew on history. "To quote [Supreme Court] Justice Thurgood Marshall's statement, 'A child born to a black mother in a state like Mississippi ... has exactly the same rights as a white baby born to the wealthiest person in the United States. It's not true, but I challenge anyone to say it is not a goal worth working for,'" Fulton wrote in an email to Mic.

"I would want to see this actualized as well as see young black men treated justly and humanely," he continued. "We are not disposable."