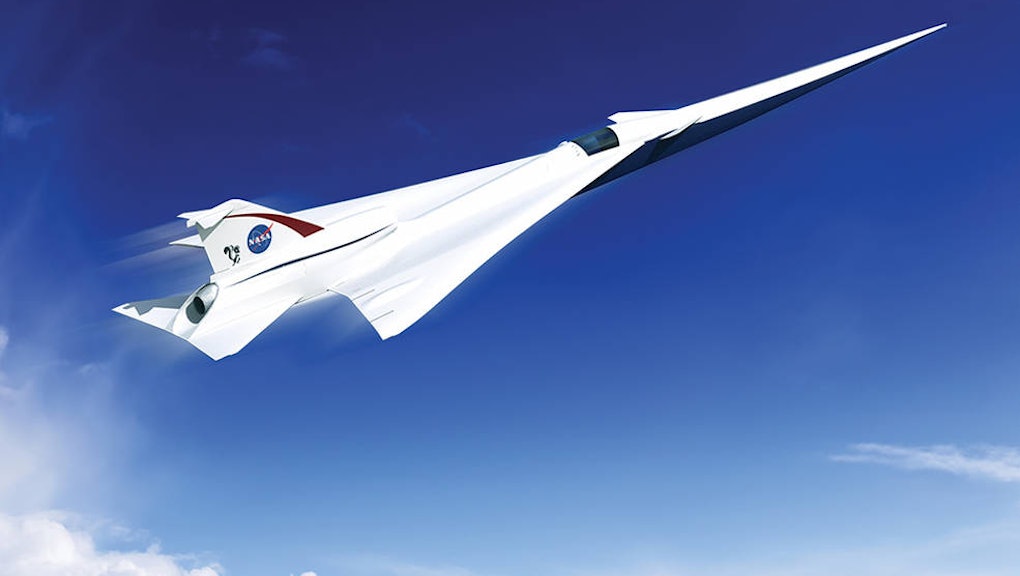 The problem with breaking the sound barrier is the jarring sonic boom that an aircraft creates as it accelerates faster than the speed of sound (about 768 miles per hour). So NASA wants engineers to figure out a way to build a quiet supersonic aircraft capable of carrying passengers.

NASA awarded a contract Monday to a team led by Lockheed Martin engineers. The project is called Quiet Supersonic Technology (QueSST) and the idea is to create a plane that will only have a supersonic "heartbeat," or a soft thump instead of a loud sonic boom.

"NASA is working hard to make flight greener, safer and quieter — all while developing aircraft that travel faster, and building an aviation system that operates more efficiently," NASA administrator Charles Bolden said Monday during a press conference. "To that end, it's worth noting that it's been almost 70 years since Chuck Yeager broke the sound barrier in the Bell X-1 as part of our predecessor agency's high speed research. Now we're continuing that supersonic X-plane legacy with this preliminary design award for a quieter supersonic jet with an aim toward passenger flight."

When an aircraft passes through the air, it creates a trail of waves in front of it and behind it. As the plane's speed increases, the waves are forced together and compressed into a cone-shaped shock wave, according to NASA. The sharp release of pressure from the cone as the plane passes through it creates a continuous sonic boom that people on the ground can hear.

The Federal Aviation Administration has banned supersonic flight over land because of the loud noise that comes with it. That's one of the biggest barriers to offering supersonic flight to paying customers. So NASA wants to figure out a way to get to supersonic speeds without the boom.

"Developing, building and flight testing a quiet supersonic X-plane is the next logical step in our path to enabling the industry's decision to open supersonic travel for the flying public," Jaiwon Shin, associate administrator for NASA's Aeronautics Research Mission, said at the conference.