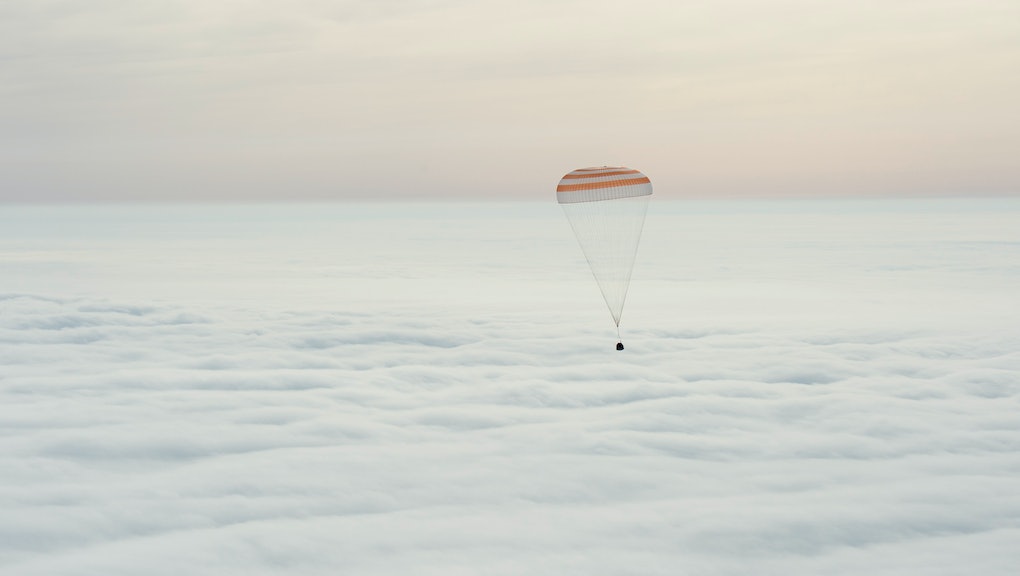 After a record-breaking 340 days in space, astronaut Scott Kelly and Russian cosmonaut Mikhail Kornienko returned to Earth from the International Space Station. They landed in Kazakhstan at 11:26 p.m. Eastern on March 1.

Earlier that afternoon, the astronauts who were headed home said goodbye to their fellow crew members:

Then they all climbed into a Russian Soyuz space capsule to get ready to head back to Earth. Here's what it looks like inside:

After a few hours of tests and checks, the space capsule slowly undocked from the ISS, piloted by commander Sergey Volkov:

The astronauts were on their way home.

The Soyuz free falls for about 25 minutes before it hits Earth's atmosphere. Once the capsule gets close to Earth, parachutes open so the astronauts can safely drift down to a landing.

Rockets fire right before touchdown to slow down the capsule even more, but the landing is still pretty jarring:

Doctors and scientists are on hand to pull everyone out of the capsule and immediately start running tests.

It looks like Kelly was glad to be home:

Kelly has several more months of medical tests ahead of him. He and his twin brother, Mark Kelly, are part of NASA's "twins study" that will test to see how long-term spaceflight influences our physiology, behavior and genetics.

You can watch a video of the whole landing here: