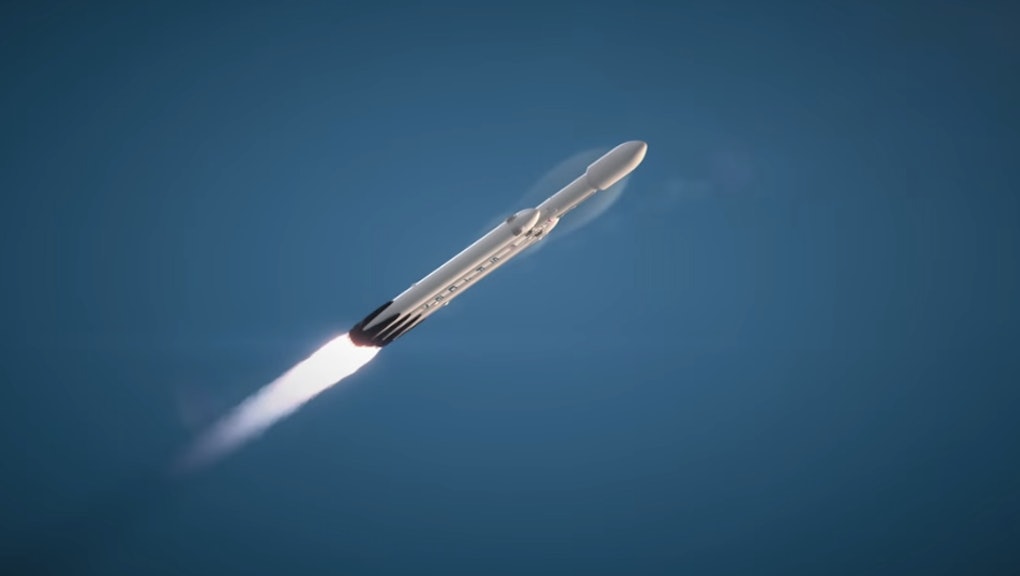 Introducing SpaceX's Falcon Heavy, the Most Powerful Rocket in the World

When SpaceX's Falcon Heavy rocket launches later this year, it will be the largest operational rocket in the world. Its debut could mark a major shift in commercial spaceflight because it will be the only reusable, and therefore cheaper (if SpaceX can reliably land and relaunch it) heavy-lift rocket available for contract.

Here's everything you need to know about it.

1. The Falcon Heavy is one impressive machine.

It's essentially three of the company's tried-and-true Falcon 9 rockets strapped together. It's powered by 27 Merlin engines, which generate 4.5 million pounds of thrust when the rocket takes off, and it can carry up to 53 tons to low Earth orbit (the altitude at which most of our satellites and the International Space Station orbit). That's about the power of 18 747 jets.

That kind of liftoff power means it could one day take humans to the moon or Mars.

2. Falcon Heavy is actually not the most powerful rocket ever built.

That'd be NASA's Saturn V rocket, which launched the Apollo moon missions. It was capable of carrying 130 tons and generating 7.6 million pounds of thrust.

Then there's Russia's Energia rocket, which could carry 100 tons. Ultimately, both of these rockets were canceled due to things like budget cuts and technical problems.

3. The Falcon Heavy is turning the spaceflight industry upside-down.

It's been a long time since we've had a functional heavy-lift rocket on American soil. Right now, NASA relies on Russia's Soyuz rocket to get its astronauts to the International Space Station. Falcon Heavy has the potential to end U.S. reliance on Russian rockets.

The giant rocket could shake up the entire launch industry. With its smaller Falcon 9 rockets, SpaceX is already offering much cheaper prices than competing companies like United Launch Alliance. Those prices will drop even more once it can consistently launch, recover and reuse its rockets. And like the Falcon 9, the Falcon Heavy is also designed to be partially reusable.

"If everything works as planned, yes, the Falcon Heavy can change the market — it provides a heavy lifter that can carry all commercial payloads in terms of size at a significantly reduced price," Roger Handberg, a space policy expert at the University of Central Florida, told Mic.

"This will put enormous pressure on the major international competitors such as Arianespace, the Russians and Chinese," Handberg added. "It would not sweep the market because states carve out exceptions for their national security and other government payloads. In the U.S., it would capture most of the market share that now goes overseas for launch."

According to Handberg, that still doesn't mean other launch companies will simply die out, even if they can't compete with SpaceX's prices.

"The U.S. government would probably subsidize, if necessary, an alternative to the Falcon Heavy, not wishing to be dependent on a single launch vehicle," Handberg said.

4. It's reviving a long-lost era of spaceflight.

Later this year, Falcon Heavy will make its inaugural launch from an oddly poetic site: the Kennedy Space Center's Launch Complex 39A. It's the same launchpad that Saturn V used to launch the Apollo missions in the '60s and '70s.

And eventually, SpaceX wants to use the Falcon Heavy to carry on Saturn V's legacy and launch humans. The rocket is designed to carry SpaceX's Dragon space capsule, which can seat seven people.

The Falcon Heavy and Dragon capsule might ultimately carry astronauts to the International Space Station, or maybe to the moon or Mars.

5. The first flight is coming soon.

Specific payloads aren't totally clear yet, but we do know Falcon Heavy will carry Bill Nye's LightSail spacecraft into orbit on its first launch. The LightSail will test if solar-powered sails are a viable means of spacecraft propulsion.

Fingers crossed that the launch date isn't pushed back again.