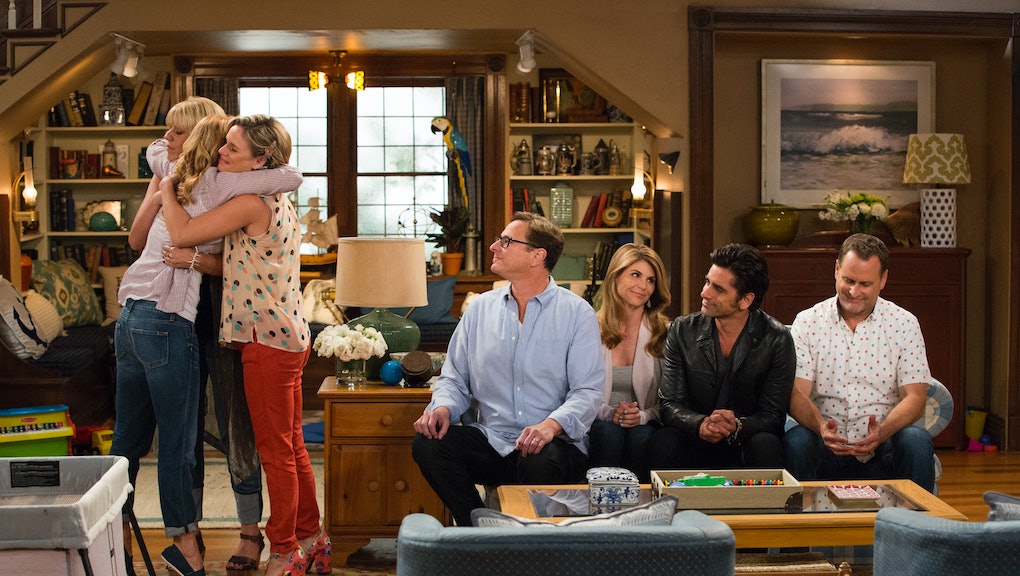 Fuller House is not a good show. Let's take that one step further: It's actually a pretty bad one.

The Netflix series and continuation of the late-'80s/early-'90s sitcom Full House is a clunky mess. It's hopelessly obsessed with referencing its former incarnation. The jokes don't work. It manages to be both supremely lazy and too eager to please all at once.

Read more: We Answered the Question: Whatever Happened to Predictability?

And yet, there's a more compelling narrative lying just beneath the show's surface. When Fuller House stops trying to reference the past or scream unfunny jokes at its audience, a real story pokes through. At its heart, Fuller House is a story about a woman coping with grief with the help of her sister and her best friend — specifically, the two most important women in her life.

D.J. Tanner — now D.J. Fuller, in case the pun in the show's title wasn't obvious enough — has experienced a significant amount of trauma for a sheltered, cis, straight, white San Franciscan. Full House started after her mom's death; Fuller House starts with a similar setup, with D.J.'s husband dying right before the series opens. For most people, losing a husband and mother at a young age would be nigh impossible to get over. Yet D.J. soldiers on.

Full House mostly ignored Danny Tanner's sadness after the first season, focusing on family-friendly laughs and lessons, whereas Fuller House actually takes some time to grapple with D.J.'s grief. She's an overworked, newly single mom at the point of exhaustion in the premiere episode. Her sister Stephanie and best friend Kimmy, recognizing the extent of her pain, move in with her.

The three become a self-described "She Wolf Pack," and D.J. remains resilient with the help of her close female confidants. She becomes comfortable dating again, leaning on her new housemates for advice and support. She gives back, too, helping Kimmy become a better parent and supporting Stephanie when she tells D.J. she's infertile.

To be clear, D.J. on her own is a dull character. By the very nature of being the Danny Tanner in this new scenario, she's the blandest of the three main women. Yet what makes her story fulfilling to watch is in how Fuller House flips the original series male-centric dynamic. The show's women build deeper connections and, in the process, make each other more interesting.

Significantly, Fuller House builds relationships based on what we already know about these women from Full House. Viewers watched these women grow up together, so it's gratifying to watch Kimmy find her place in the Tanner-Fuller home after years of being rejected by that family on Full House. Her friendships with D.J. and Stephanie are connections built on decades of history.

Friendships in real life help those grieving through difficult times. It's a difficult process for both the bereaved and the friends, but an important one. Helping a loved one get through the loss of a loved one is a compelling (not to mention relatable) narrative by itself, and would be far more so on a competent show.

Unfortunately, the weighty themes of struggling under the emotional weight of a loss are buried beneath the generally poor quality of Fuller House. Creator Jeff Franklin and his writing staff clearly set out to make a lighthearted reunion revival filled with cartoonishly broad references to the past. They just accidentally stumbled upon a more interesting story about coping with grief in the process.

Fuller House has been renewed for a second season, since Netflix renews basically everything it can. Knowing how Fuller House approached this first season, Franklin and his team will likely shoehorn in more meta jokes and references to the past; it will probably do very well.

If the show's crew wanted to be a bit bolder, however, they could devote more time to the She Wolf Pack at its center. Even the strongest woman — and for all her blandness, D.J. is incredibly resilient — needs help to make it through. To paraphrase the theme song, Kimmy and Stephanie are her hands to hold on to. Watching them pull each other along is this otherwise mediocre show's weepy, hug-obsessed heart.