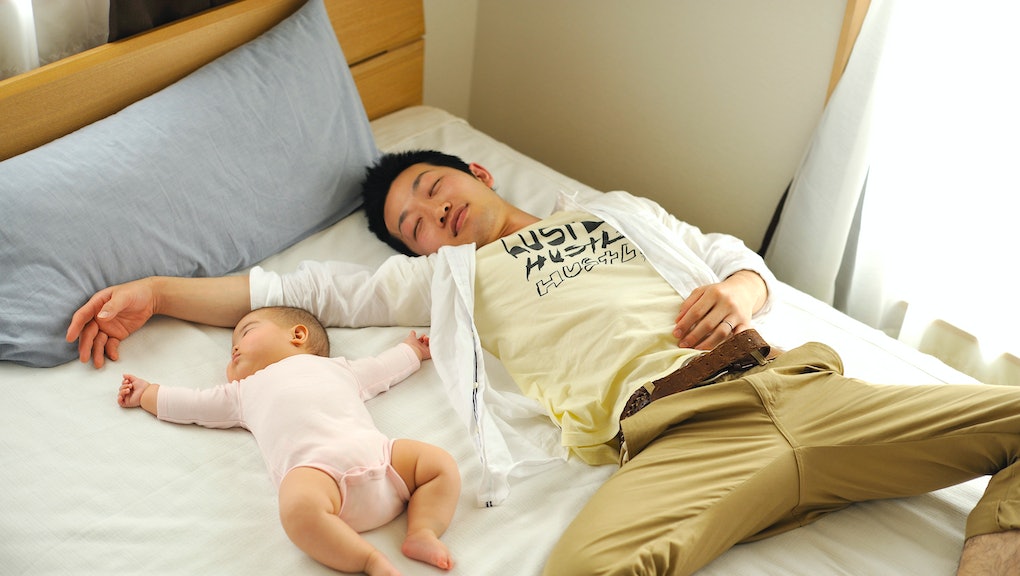 Some people seem to have enhanced sleeping abilities. They sleep for just four hours each night, wake up feeling totally refreshed and don't get tired during the day. Essentially, they're adding about 60 days to their waking life every year compared to people who need eight hours of sleep each night.

How do they do it? There's evidence that these efficient sleepers have simply won the genetic lottery.

Getting enough sleep is important, but some of it is beyond our control. Average people spend one-third of their lives asleep, but scientists know shockingly little about what goes on in their bodies during that time — or why we even need to sleep in the first place. It's one of the most fascinating unanswered biological questions, Michael Christman, president of the Coriell Institute for Medical Research, told Mic.

Scientists do know, however, that most of us aren't getting enough sleep. One study this year found that one-third of Americans get less sleep than they should. The Centers for Disease Control and Prevention calls our lack of sleep a "public health problem."

We also know that not getting enough sleep is bad. According to the CDC, we should be getting at least seven hours of sleep every night — otherwise we're putting our health in jeopardy:

And a growing body of research suggests that, if we don't get enough sleep, our brain doesn't have enough time to clear out neurotoxins that build up during the day — a process that might help protect against diseases like Alzheimer's.

There are some tricks you can use to make sure you get enough sleep, like avoiding smartphones and computer screens right before bed, and sleeping in a cool, dark room — but some aspects of our sleep are beyond our control.

Some of our sleep behavior is genetic. "Just like many other traits — height, weight, body shape — sleep behavior is at least partly inherited," Ying-Hui Fu, a researcher at UCSF who studies the genetics of sleep, said during a Reddit AMA about her research in September 2015.

Genetics influences the timing of our sleep (if you're a morning person or a night person), duration of our sleep and how we respond to sleep deprivation, Allan Pack, director of the Penn Sleep Center, told Mic. Most sleep disorders are heritable, he added.

How genes influence our sleep: The first clue that genetics might influence sleep came from a twin study back in the 1930s. In the study, identical twins proved to have much more similar sleep patterns than fraternal twins.

Fast forward almost a century, and scientists have identified specific genes that seem to have something to do with how much we sleep and how well we sleep. In 2014, researchers found two regions of DNA that seem to influence how long a person sleeps. Other research has found that a variation in the ABCC9 gene is associated with sleeping about half an hour less per night.

Scientists also now know that "clock genes" regulate our biological clock, or circadian rhythm. They help keep us awake during the day and asleep at night. People with variations or mutations in these genes sometimes develop sleep disorders where they become an extreme morning lark or extreme night owl.

Some of us are genetically better sleepers than others. One of the most interesting insights sleep genetics research has yielded is that some people seem to handle less sleep better than others. That brings us back to the super-sleepers who get 60 extra days every year.

In her research, Fu found a mutation in the gene DEC2 that was present in super-sleepers but absent in their normal-sleeping family members and other unrelated volunteers. She bred mice with the same mutation and found they also could get by on less sleep than mice without the mutation.

Could we engineer humans to sleep better? We've identified specific genes that affect sleep, so once gene editing techniques like CRISPR are perfected, it seems like tweaking sleep genes might be possible. Maybe we could all become super-sleepers.

"Technologically that wouldn't be difficult to do, but I don't think that would be wise," Christman told Mic. Aside from ethical concerns about gene editing, tweaking genes associated with sleep might affect other physiological processes, he said.

Instead, he thinks studying sleep genes could help us develop better drugs to treat sleep disorders or figure out ways to personalize sleep treatment. People are different, so catch-all sleep recommendations don't work for everyone.

For example, understanding exactly how clock genes work could help scientists figure out a way to treat jet lag. Someone with a sleep disorder related to gene A might respond well to Ambien, but someone with a problem related to gene B might not see as favorable results, Christman said.

Sleep-tracking apps might be helpful in providing more insight, Pack noted. There are lots of mobile apps that can analyze sleep quality and sleep duration and detect disordered breathing.

Maybe you didn't win the genetic lottery, but there is one good way to make sure you're getting the sleep you need: "I think that right now, the best way is still to listen to your body and figure out what is the best schedule and duration for yourself," Fu said in the AMA.