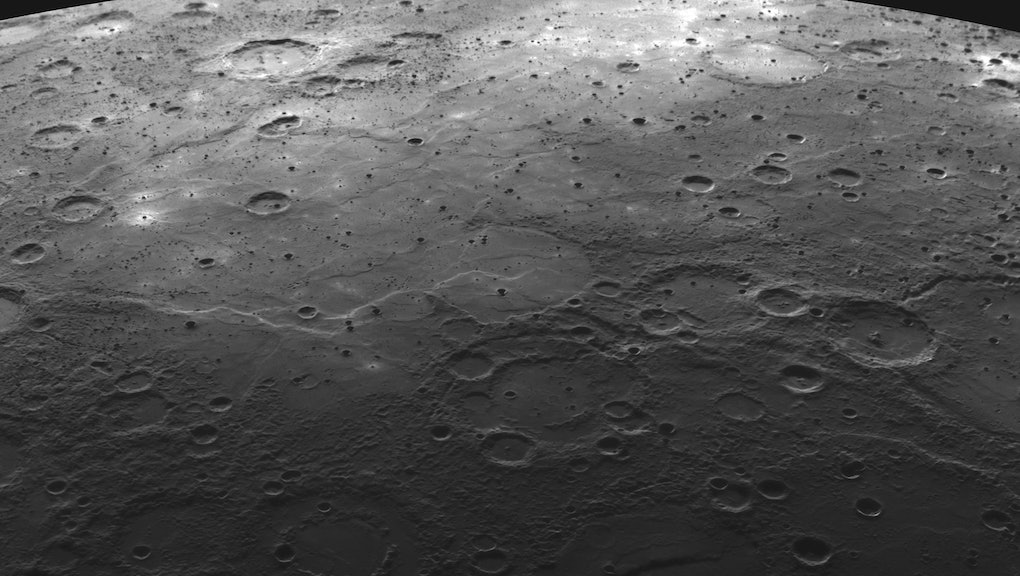 Scientists Finally Discovered the Source of the Mysterious "Darkness" on Mercury

It's amazing how much we don't know about our own cosmic backyard.

Take Mercury, for example. Scientists have wondered for years why the small planet is so dark.

Now the Messenger spacecraft that circled Mercury from 2011 to 2015 may have provided us with an answer. It revealed that Mercury is coated in patches of graphite — almost like someone with a giant pencil colored all over the planet.

Scientists figured this out by examining X-rays and reflective measurements of Mercury's surface recorded by the Messenger spacecraft right before its crash landing on the surface in April 2015. The research is published in the journal Nature Geoscience.

Previously, scientists suspected Mercury was covered in some kind of carbon (not necessarily graphite) delivered by comet impacts from long ago.

This new data from Messenger shows that carbon is indeed responsible for Mercury's darkness, but it suggests the carbon was buried in Mercury's crust all along, and comet impacts just uncovered and exposed some of it.

Scientists now think that when Mercury was first forming, its close position to the sun turned it into a molten ball of magma. Heavier elements sank into the planet to form its core, but lighter materials like graphite stayed in the crust.

"The finding of abundant carbon on the surface suggests that we may be seeing remnants of Mercury's original ancient crust mixed into the volcanic rocks and impact ejecta that form the surface we see today," Larry Nittler, a researcher at the Carnegie Institution for Science, said in a statement.

This research is helping scientists piece together how our solar system neighbor formed. There's a lot more data from Messenger that scientists still need to mine through, so it's likely there are more surprises in store.