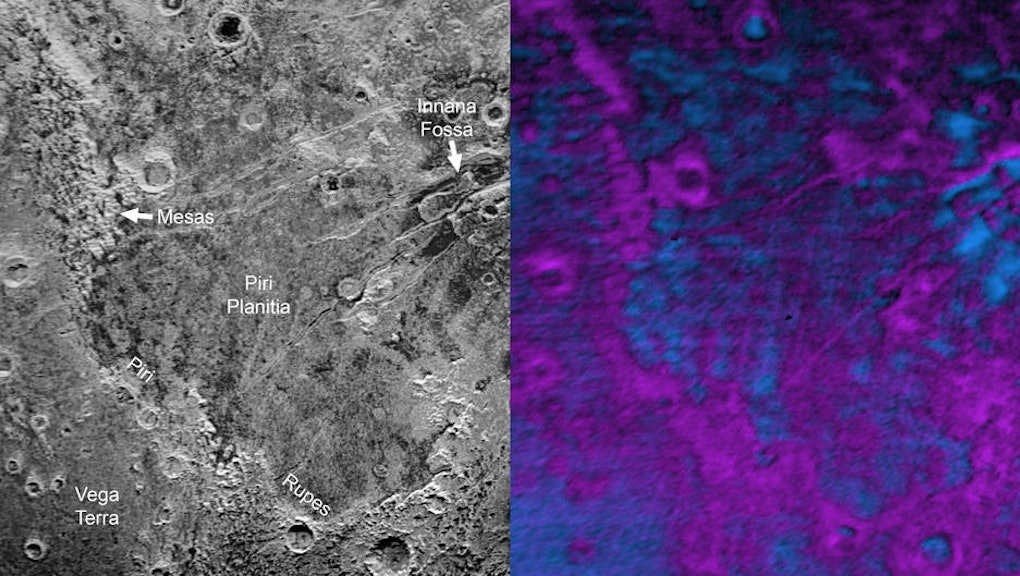 Scientists Discovered a Mysterious "Bite Mark" on Pluto — So What Caused It?

It looks like something took a giant bite out of the western hemisphere of Pluto.

The bizarre "bite mark" feature is helping scientists better understand Pluto's mysterious geology, and it could lead to insights into how our solar system formed.

Read more: Pluto Is Full of Water Ice, Probably From the Tears It Cried When We Rejected It

Scientists think the bite mark is caused by methane on the surface sublimating into a gas and exposing a layer of ice below. You can see the dark-colored mark in the center panel below: The false color image on the right shows methane (purple) and ice (blue). You can see how the bite mark is made of mostly ice, not methane:

"Scientists speculate that sublimation of methane may be causing the plateau material to erode along the face of the cliffs, causing them to retreat south and leave the plains of Piri Planitia in their wake," NASA said in a press release.

This is more evidence that Pluto isn't just a lump of frozen rock floating out in the outer solar system. More and more data suggests that Pluto was recently active, and that it may have some kind of ongoing geological process.

Scientists will continue to study Pluto as more data comes in over the next few months.