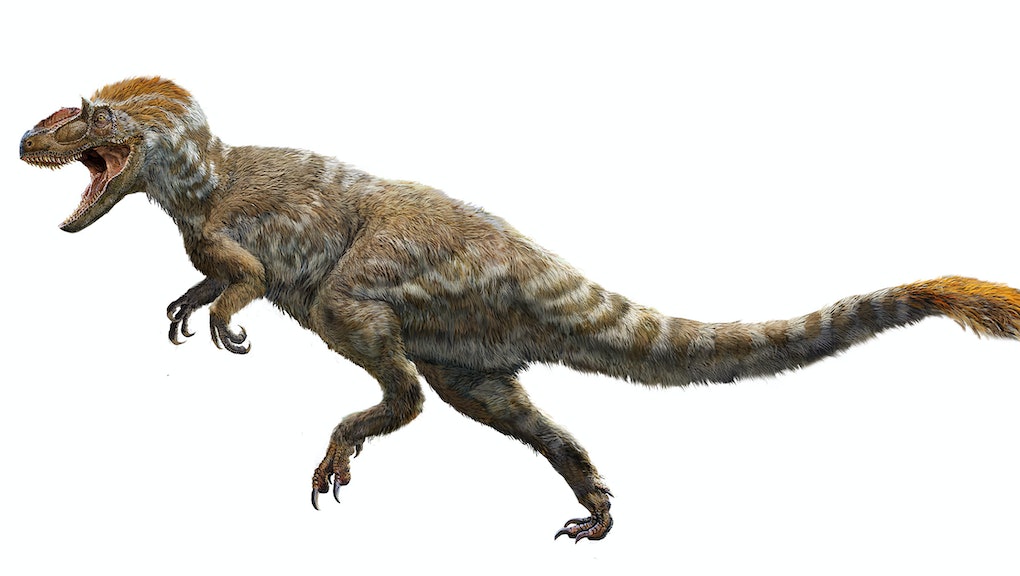 The Yutyrannus, or "Beautiful Feathered Tyrant," Is the Weirdest Dinosaur You've Ever Seen

The new exhibit "Dinosaurs Among Us" at the American Museum of Natural History in New York is a direct contradiction to what you probably learned about dinosaurs in elementary school. The takeaway message of the exhibit is that modern birds are "virtually in every way living dinosaurs," exhibit curator Michael Novacek said Tuesday during a media preview.

So you could argue those pigeons hopping around Central Park and that chicken you had for lunch are dinosaurs, or they're at least part of an unbroken evolutionary link.

A growing body of evidence shows dinosaurs and modern birds share many common behaviors and characteristics, but one of the most jarring, and the one most likely to challenge our elementary school understanding of what dinosaurs are, is the presence of feathers.

One of the exhibit's centerpieces is the Yutyrannus — a 1-ton cousin of the Tyrannosaurus rex discovered in China in 2012. While excavating, scientists found fossilized feathers around the skeleton, suggesting the Yutyrannus was covered in a fluffy, feathery coat.

Just look at this thing. It's not exactly the kind of dinosaur rendering we usually see in books and movies:

Researchers have already found many smaller, feathered dinosaurs, but this discovery means that larger dinosaurs, even the T. rex, may have also been covered in downy fluff. It's also more evidence that modern birds are directly connected to dinosaurs.

The idea that birds are dinosaurs was first proposed about 150 years ago, according to Novacek. The hypothesis was met with criticism at first, but evidence from the last few decades has convinced most scientists that birds are a kind of dinosaur in the same way that humans are a kind of mammal.

Thousands of dinosaurs with feathers have been discovered, according to the museum, and most of them belong to the therapod family of dinosaurs that includes the Yutyrannus and Tyrannosaurus rex. Now some scientists are starting to think that all dinosaurs, not just therapods, may have had some kind of feather-like coating.

If you feel like your childhood just got punched in the face, you're not alone. But this is all part of what makes science so cool: New discoveries and observations are always changing our understanding.

And next time a pigeon poops on you, maybe you can count it as a dinosaur encounter.