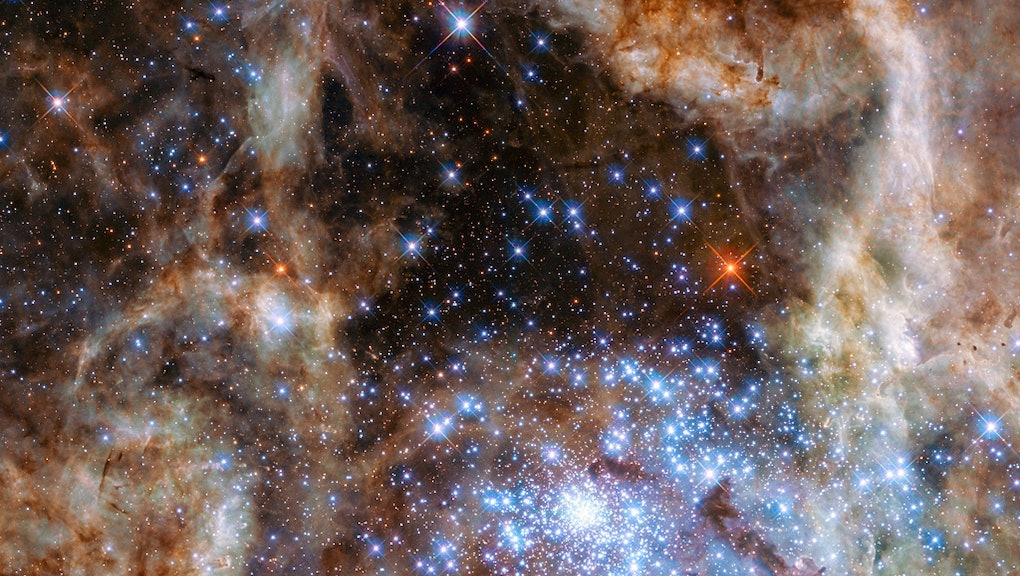 The Hubble Space Telescope captured images of nine absolutely monster-sized stars with masses over 100 times that of our sun. They're in a neighboring galaxy called the Large Magellanic Cloud. And thanks to this photo, you've now got a new iPhone background image.

The nine giants are part of a star cluster called R136 in the Tarantula nebula about 170,000 light-years away from us. Here it is:

Up until a few years ago, astronomers didn't know stars could get this big. The nine stars are so bright that all together they outshine the sun by a factor of 30 million, according to the European Space Agency. You can see the star cluster in ultraviolet in the image below:

The stars are so huge and luminous that they're likely nearing the end of their life — the period where stars swell, eject material and then implode.

"They eject up to an Earth mass of material per month at a speed approaching 1% of the speed of light, resulting in extreme weight loss throughout their brief lives," according to a statement from ESA.

The researchers think that if the stars are close enough together, they could collapse into black holes that may collide with one another and produce gravitational waves. Now that we finally have the ability to detect gravitational waves, this star cluster could be a future hotspot.