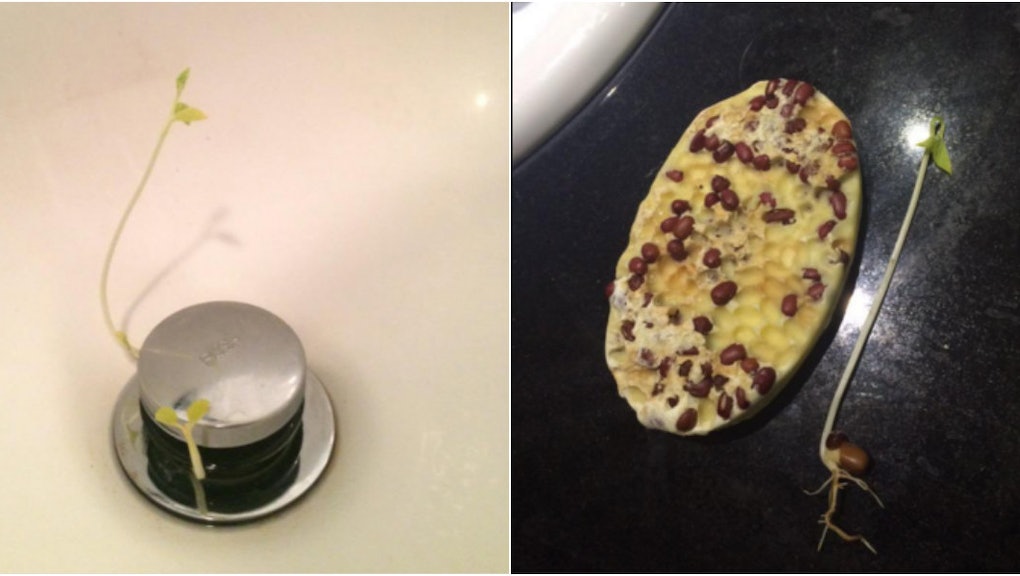 Cult favorite Lush Cosmetics has done it again: First the brand's bath oil turned you pink, and now it's selling a product that can turn your bathtub into a jungle. For real.

Over the summer, customers using Lush's Wiccy Magic Muscles, a pain-relieving massage bar, started realizing that little plants were growing in their bathtub and sink drains after using the product.

Nine months after photos first surfaced on social media, folks are still scratching their heads. Only now, they seem to be more confused about why people are using a massage bar in the shower (but hey, it happens).

But what was making the plants sprout up in the first place? Lush is finally addressing the true culprit: aduki beans. The beans, which are often used in Asian cooking, can grow plants one to two feet high without the need for soil. Now picture going on vacation and coming back to that in your shower.

"We use organic aduki beans to create a texture in the massage bar," Helen Ambrosen, Lush co-founder and product inventor, said in an official statement. "In order for the beans to germinate, they must have been left in the shower for a few days. The results you get just go to show how fresh the ingredients really are."

Read more: Lush Is Welcoming Syrian Refugees to Stores in a Powerful Way

"Bean seeds have a long storage life, up to several years, due to their strong seed coat. They need just need water, oxygen, and the right temperature to sprout," Kelly Dobos, a cosmetic chemist, told NewBeauty. "It's easy to see how these seeds can sprout in drains and potentially cause damage to plumbing if they were to get caught in drains. Traditional preservatives used in cosmetics protect against the growth of bacteria, yeast, and mold but won't prevent these aduki beans from growing when exposed to the right conditions."

"At Lush we love a refreshing shower and a healthy salad, but we agree that it's probably best to keep the two separate," Hilary Jones, Lush Ethics Director, said in the official statement." For a shower free of sprouted Adzuki beans we suggest using your massage bar either before or after going into the shower. You will find your massage bar lasts longer this way too!"

But hey, there are far scarier things that come out of drains than plants, so this is really nothing to be alarmed about it.