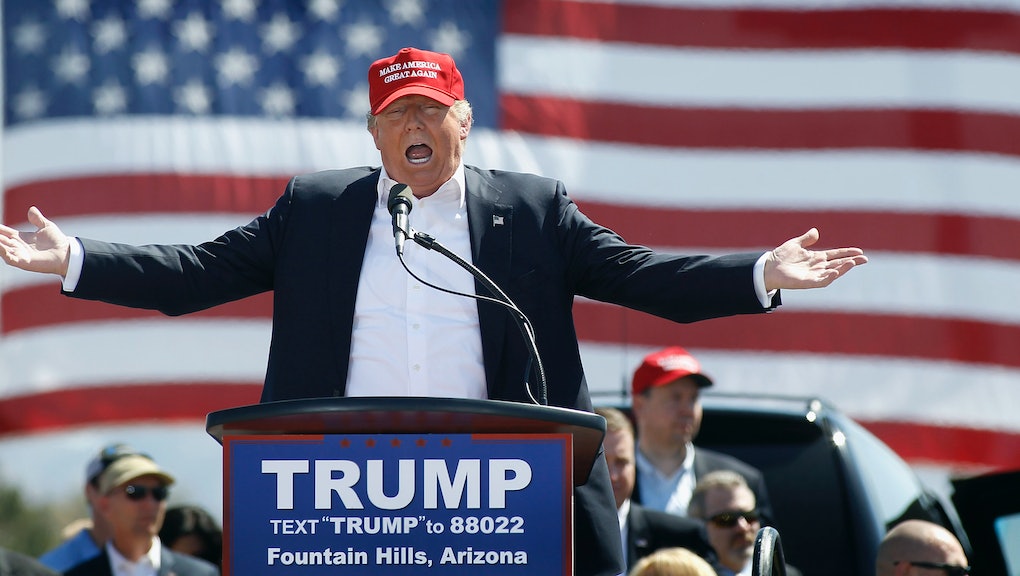 "Border-related violence and crime due to illegal immigration are critically important issues," the politician beckoned from a stage in Arizona. "We cannot sacrifice our safety to the murderous greed of drug cartels. We cannot stand idly by as drop houses, kidnappings and violence compromise our quality of life."

The cameras were rolling as a populist star of the Republican Party continued: "We cannot delay while the destruction happening south of our border — our international border creeps its way north."

This was not Donald Trump after his primary win in Arizona on Tuesday. It was former Arizona Gov. Jan Brewer six years earlier, speaking to reporters at a press conference to announce that she'd signed SB 1070 into Arizona state law. The bill was later dubbed the "show me your papers" law, which gave law enforcement officers in the state the power to stop and question anyone they suspected of being an undocumented immigrant and eventually cost the state billions of dollars.

Trump has risen to the top of the Republican race for the White House with an uncensored appeal to mostly white voters who fear their grip on American culture slipping, according to observers. Among his more outlandish proposals are his promises to close America's borders, build a massive wall marking the country's Southern border and coerce Mexico to foot the $10 billion tab for it.

At a campaign rally in Tucson, days before Arizona's GOP primary, Brewer opened for Trump with a rousing appeal to her former constituents. "All of us who live in Arizona know a little about illegal immigration and what it has done to our great state," Brewer told the crowd. "All of us believe in the rule of law: come legally!" she said about undocumented immigrants before coming full circle. "And Mr. Trump understands that."

"A nation without borders is not a nation," Trump says on his online platform. "There must be a wall across the southern border."

Perhaps nowhere is that rhetoric more palpable than in Arizona, a state with a very recent history in anti-immigrant legislation. Many people draw a direct line between Trump's rise on the national stage and policies of the extreme right that have been embraced by the state's politicians in the last decade.

"I think Trump will no doubt carry the state because he's the face of hatred and speaks to all the angry people in this state who feel justified targeting immigrants and other non-whites because we're so close to the border," Lola Rainey, a former Pima County prosecutor who attended Trump's rally in Tucson, said ahead of the primary in a phone interview.

Alex Gomez, 34, lives in Phoenix and moved to Arizona as a child after her family fled California when that state passed Proposition 187 in 1994, which denied undocumented immigrants public services like health care and education. She remembers 2010's fight over SB 1070 as "the nightmare resurfacing again." For her, the fight was deeply personal: Her father had long been undocumented but, by 2010, had just received his permanent residency.

"As soon as SB 1070 passed there were entire neighborhoods that were completely deserted," she said in a phone interview. "Supermarkets, flea markets, swap meets were bare — it was like a ghost town."

As people fled the state — as many as 100,000 Latinos, Fox reported — in fear that they would be profiled and harassed, the bill had a far-reaching impact. Within a year, more than 16 states introduced SB 1070 copycat laws into their legislatures. Alabama introduced HB 56, the harshest of them all, in 2011. The state's politicians bragged at the time that the law "attacks every aspect of an illegal alien's life," and they weren't kidding. It barred anyone in the state from renting a home or offering a ride to an undocumented immigrant and required teachers to run citizen checks on students. Later, courts slowly dismantled some of the more egregious parts of the law, but not before multiple people reported having the water in their homes shut off because they were unable to provide proper identification.

Meanwhile in Arizona, Brewer defended her state's law from critics. In 2011, she visited Huntsville, Alabama, to promote her book, Scorpions for Breakfast: My Fight Against Special Interests, Liberal Media, and Cynical Politicos to Secure America's Border, and blamed the "liberal media" for twisting the law's intent. "The bottom line is we have to explain to people we are a nation of laws," she said.

But increasingly, Arizona became a state of debts. In the first year of the law's existence, the state lost an estimated $141 million in conference cancellations alone. In 2012, the Supreme Court struck down key provisions of the law.

But the ideology behind the law hasn't died down, and Trump is living proof. "It's an election year," Alessandra Soler, who works as executive director of the ACLU of Arizona, said in a phone interview. "It's when immigrants become scapegoats and politicians exploit people's feelings about the border and that's what we're seeing playing out political stage."