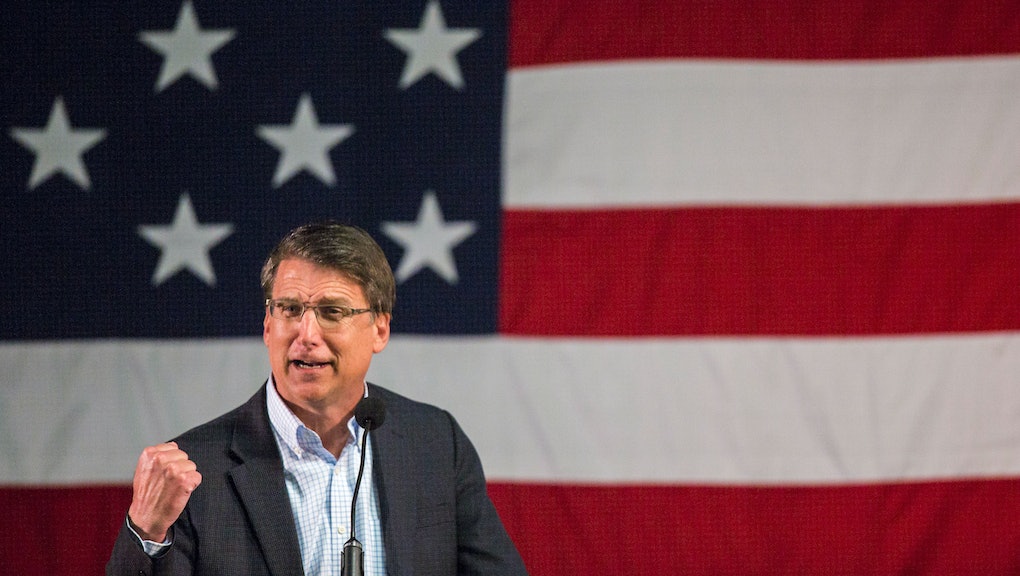 North Carolina Reminds the World After Anti-Trans Law That #WeAreNotThis

The fight for transgender equality has moved to the bathrooms of North Carolina.

Late on Wednesday, the state's governor, Republican Pat McCrory, signed into law House Bill 2, also known as the Public Facilities Privacy and Security Act, which bans people from using bathrooms that don't align with their biological sex. Significantly, the bill also makes it impossible for local municipalities in the state to pass anti-discrimination ordinances, which Charlotte recently did.

McCrory took to Twitter to explain why such pre-emption was necessary for his party. "Ordinance defied common sense, allowing men to use women's bathroom/locker room for instance," he tweeted. "That's why I signed bi-partisan bill to stop it."

As news of the bill spread, McCrory tweeted an outright defense of it. "I signed bipartisan legislation to stop the breach of basic privacy and etiquette, ensure privacy in bathrooms and locker rooms," he said.

What's happening now in North Carolina is the latest episode in a long-running drama of conservative angst over transgender visibility. Recently, the Republican National Committee passed a resolution condemning what it called "government overreach regarding Title IX policies in public schools," signaling a more coordinated effort to curb transgender rights. In 2015, a proposed anti-discrimination ordinance in Houston failed to get enough votes to pass, thanks largely to an all-out public relations campaign by conservative opponents who stoked people's fears about allegedly dangerous men being permitted to use women's restrooms.

But those fears have never actually been realized. There hasn't even been a documented case of transgender people attacking cisgender people in public bathrooms. In fact, just the opposite is more likely to happen: Transgender people are routinely harassed in public bathrooms. At least 70% of trans people have reported being harassed while trying to use public restrooms, and 10% say they've been physically assaulted, according to a study by the Williams Institute, an LGBT think tank at the University of California, Los Angeles.

That includes a 17-year-old girl named Olivia, who was confronted and screamed at by a swarm of angry protesters when she tried to use a public bathroom in Charlotte in 2015. (Olivia declined to give her last name to Matt Comer at QNotes, who first reported the incident, due to safety concerns.) An evangelical pastor named Flip Benham reportedly told QNotes, "I don't want a pervert like yourself trying to misrepresent what happened in there when that young boy went into that bathroom with the young girls."

This was the context for Wednesday's vote. Now, North Carolinians are taking to Twitter to speak out against the new law with the hashtag #WeAreNotThis.