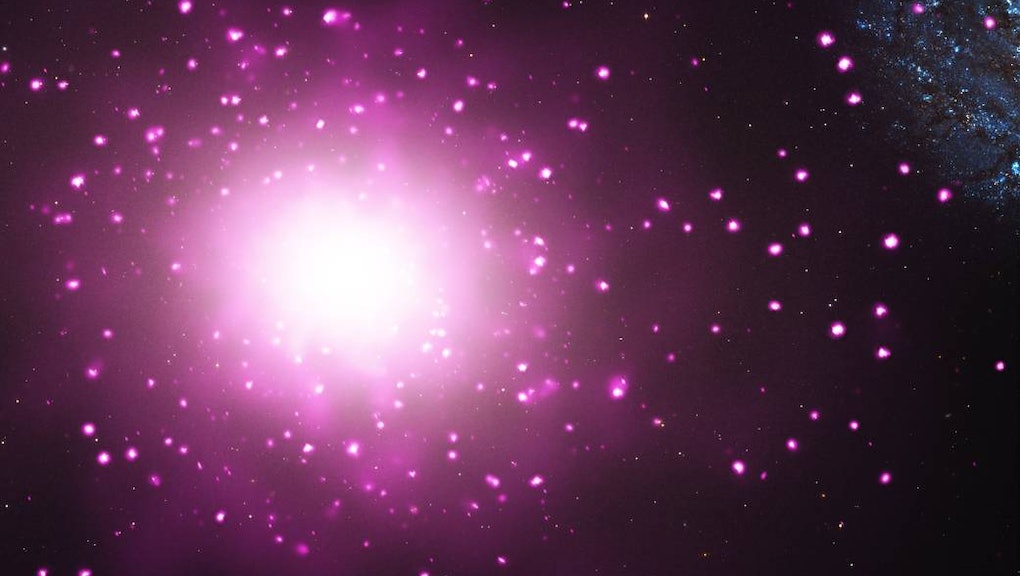 "Outrageously Luminous" Galaxies Are So Bright, Experts Had to Invent a Name for Them

A newly discovered cluster of galaxies is about 10 billion years old and was formed about 4 billion years after the Big Bang. The galaxies are so bright, astronomers don't know what to call them.

These galaxies are closer to 100 trillion solar luminosities.

"We've taken to calling them 'outrageously luminous' among ourselves, because there is no scientific term to apply," Kevin Harrington, lead author on the paper describing the discovery, said in a statement.

Astronomers think the discovery could help explain how galaxies form.

"The galaxies we found were not predicted by theory to exist; they're too big and too bright, so no one really looked for them before," Min Yun, an astronomer who worked on the new paper, said in a statement.

"Knowing that they really do exist and how much they have grown in the first 4 billion years since the Big Bang helps us estimate how much material was there for them to work with. Their existence teaches us about the process of collecting matter and of galaxy formation. They suggest that this process is more complex than many people thought."

What makes them so bright? A phenomenon called "gravitational lensing" bends and warps the light coming from these galaxies and actually makes them look about 10 times brighter from Earth than they really are, the researchers say. They're still impressively bright though.

The source of the brightness comes from the galaxies' extremely high rate of star formation. They're churning out a new star ever hour. Our own galaxy only creates about seven new stars per year, according to NASA.

Studying these galaxies could also help astronomers figure out more details about how stars form.