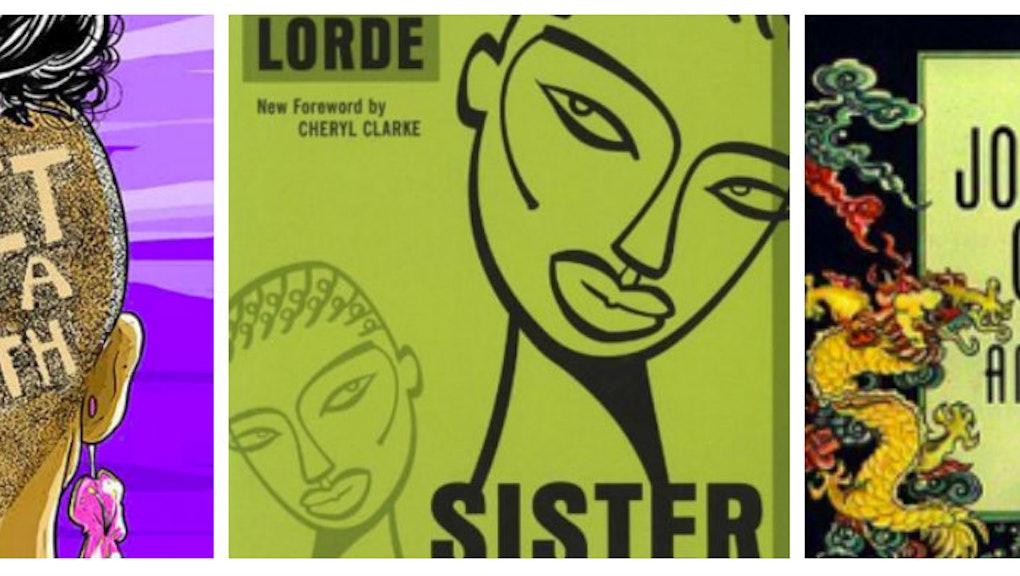 Women's History Month is almost over, but that doesn't mean that a genuine appreciation for work created by women has to stop, too. Behold, a multi-genre list of fiction, poetry and nonfiction created and largely embraced by women. The subjects range from revolution to reproductive justice, and includes some classics, a few underrated gems and a couple newbies.

Newcomer Gabby Rivera's first novel is already earning rave reviews for bringing stories traditionally left on the margins to the center. It tells the story of a queer Puerto Rican from the Bronx who heads to Portland, Oregon after coming out to her family.

No reading list would be complete without Toni Morrison. Sula is Morrison's 1973 novel about the uneasy relationship between two women who've known each other since childhood and share a painful secret.

Published in 2012, this memoir established Janet Mock as one of the preeminent voices of our generation. In it, she recounts her life as a young transgender woman growing up between California, Dallas and Hawaii, and her road to embracing her identity.

The Buddha in the Attic by Julie Otsuka

In her second novel, Japanese-American writer Julie Otskuka brings to life the stories of so-called "picture brides," women brought to California from Japan in the early 20th century to marry migrant men. The San Francisco Chronicle called the book "an understated masterpiece."

The Color Purple by Alice Walker

Now a staple on Broadway, Alice Walker's 1983 masterpiece of a poor black woman in the South is still an essential. It's a story of sisterhood and survival, and still resonates today.

Salvage the Bones by Jesmyn Ward

Stories about the devastation wrought by Hurricane Katrina usually focus on New Orleans, but this novelist focused her heartbreaking fictional account of the storm through the eyes of a family along the Gulf Coast of Mississippi. The story earned her the National Book Award for Fiction in 2011.

In this collection of poetry, award-winning writer Patricia Smith examines her childhood and the forces that shape black girl life in big cities with Southern roots. The collection earned her the 2013 Wheatley Book Award in Poetry.

Everything I Never Told You by Celeste Ng

Celeste Ng's wildly popular debut novel focuses on a Chinese-American family living in 1970s small-town America that's forced to grapple with the sudden loss of its favorite daughter. The tragedy forces everyone to revaluate the sacrifices — cultural, material and emotional — they've made in their pursuit of the American dream.

Why Not Me? Mindy Kaling

Actress and writer Mindy Kaling's second book is a hilarious and insightful collection of essays about what how to make it in an industry that seems dead set against your success — particularly if you're the brown-skinned daughter of immigrants.

In this memoir, outspoken third wave feminist Rebecca Walker recounts what it was like to grow up between races, coasts and celebrity.

Published in the 1970s, this gripping memoir tells the story of Angela Davis's time atop the FBI's Most Wanted list, and her commitment to a communist, anti-racist political agenda that has inspired generations of activists.

So Far From God by Ana Castillo

This novel by Ana Castillo follows the fortunes of a Chicana family in New Mexico who found themselves in the middle of a bit of magic.

The Pathless Sky by Chaitali Sen

In her debut novel, Chaitali Sen tells the story of a burgeoning college romance that's happening amid the backdrop of a country that's falling apart politically.

A staple of women of color feminism, Audre Lorde's 1984 collection of essays are still poignant reminders of the need for an intersectional analysis and approach to change.

Pushout: The Criminalization of Black Girls in Schools by Monique W. Morris

Published on the heels of #SayHerName, the movement to shine a spotlight on the institutional problems facing young girls of color, Pushout explores a very specific piece of that puzzle: how and why black girls are criminalized in the classroom.

This Bridge Called My Back by Cherrie Moraga and Gloria Anzaldúa

Originally published in 1981, this anthology helped introduced the world to United States third world feminism, which is rooted in the struggles of people of color. When the fourth edition was published in 2015, it was proof that the book still resonates nearly 40 years later.

The Misadventures of Awkward Black Girl by Issa Rae

Few people have seen the YouTube-to-Hollywood success experienced by Issa Rae after her wildly popular web series The Misadventures of Awkward Black Girl. But now she's working with the likes of Pharrell Williams, HBO and Shonda Rhimes, and she tells the whole story in this memoir.

Colonize This: Young Women of Color on Today's Feminism by Daisy Hernandez and Bushra Rehman

In the tradition of This Bridge Called My Back and other pivotal anthologies, Colonize This! offers a perspective on feminism from a new generation of young women of color. Published in 2002, it grapples with queer identity, gentrification, immigration and a host of other realities still facing communities of color.

When Chickenheads Come Home to Roost by Joan Morgan

Hip-hop became a worldwide phenomenon in the 1990s, and with it came questions about where women fit in its aggressively macho posturing. This memoir from celebrated music journalist Joan Morgan gave a feminist's perspective on the culture, one that was at once loving, critical and fun to read.

Originally published in 1990, this is a memoir about Mary Brave Bird's life on the Rosebud Indian Reservation in South Dakota and her activism throughout the 1970s to bring attention to native rights.

Claire of the Sea Light by Edwidge Danticat

This novel tells the story of a girl born into tragedy in Haiti and the relationships that ultimately sustain her family, village and nation.

Not That Kind of Girl by Lena Dunham

Lena Dunham is one of our generation's most successful writers, but that doesn't inoculate her from criticism. In fact, it opens her up to more of it. Dunham addresses that and a range of personal and professional conundrums that she's dealt with — or trying to.

The House on Mango Street by Sandra Cisneros

Published in 1984, this is a coming-of-age story of life in a Latino neighborhood in Chicago in which residents have to learn to live with loss early in life.

This 1989 best-selling novel about Chinese-American women focuses on mothers, daughters and the secrets they share.

In this political manifesto, transexual theorist Julia Serano uses her own experience to demonstrate the prevalence of transphobia and makes audiences rethink gender norms.