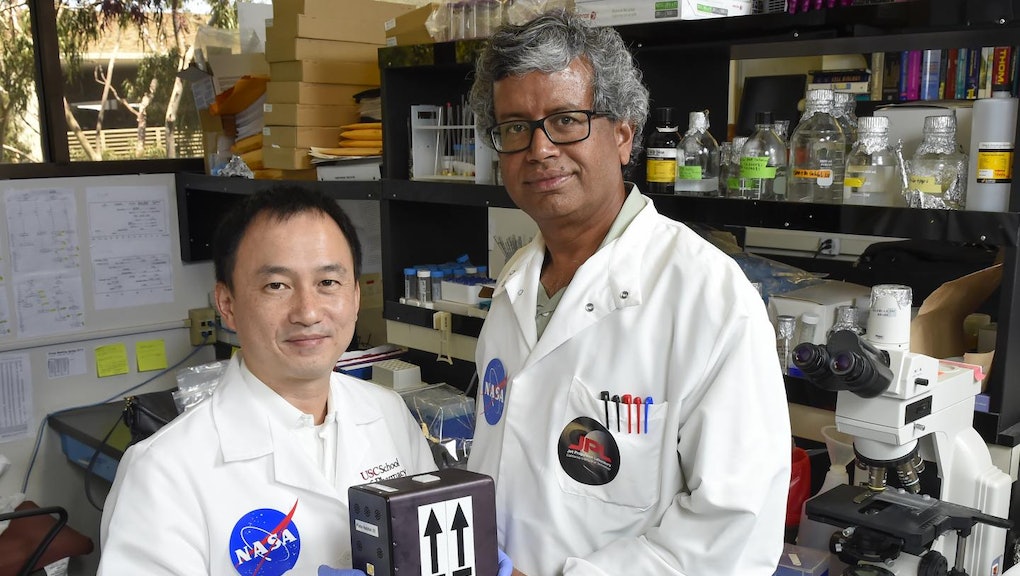 Researchers Are Trying to Develop New Drugs in Space

One of the most important drug-development labs is floating 250 miles above our heads on the International Space Station.

Scientists are sending a type of fungus called Aspergillus nidulans to the ISS onboard a SpaceX Falcon 9 rocket on April 8, hoping to use it to create new types of pharmaceuticals.

Scientists have studied space medicine since the 1950s, but this is the first time they've launched fungus into space to try and develop new types of drugs.

"The high-radiation, microgravity environment in space could prompt Aspergillus nidulans to produce molecules it doesn't create in Earth's less stressful conditions," Clay Wang, lead researcher on the study, said in a press release.

What these drugs could do: Researchers think this particular fungus has potential use in anti-cancer, anti-fungal and Alzheimer's studies. It could even help solve a common medical problem among astronauts.

"We've done extensive genetic analysis of this fungus and found that it could potentially produce 40 different types of drugs," Wang said. "The organism is known to produce osteoporosis drugs, which is very important from an astronaut's perspective because we know that in space travel, astronauts experience bone loss."

Astronauts have their own medical kits and access to certain types of drugs. The ability to develop drugs in space will be critical on long-term missions when the closest medical supplies are several thousand miles away.

"Drugs have an expiration date," Wang said. "NASA's human mission to Mars is expected to last anywhere from one to three years. Not all drugs are going to be stable in that time period, so the ability to make drugs in space will enable us to go further away from Earth and will also benefit future space explorations."

This isn't the first time the ISS has hosted medical and pharmaceutical experiments. ISS astronauts have tested out new cancer treatment techniques, and the space station has hosted research on how to treat Alzheimer's and diabetes, and on how new drug designs could fight infectious disease.