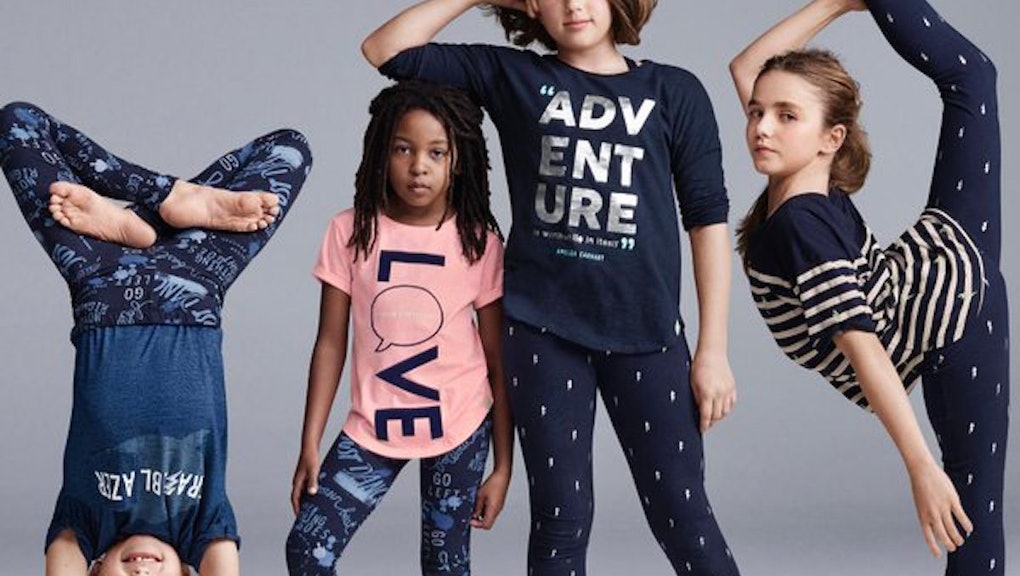 Ellen DeGeneres' Gap Kids clothing line, GapKids X ED, is all about encouraging children to embrace what makes them unique. But it's that "empowerment" aspect of the brand's campaigns that left many confused by the most recent photos posted to GapKids' Twitter account on Saturday.

One photo showed two white children doing acrobatic moves while a third, older white child leans her arm on the black child seen in the ad. Many people on Twitter took issue with the tweet, which reads "meet the kids who are proving that girls can do anything."

Not only is GapKids being called out for only using one "token" child of color; some also pointed out that the brand was presenting black girls as a mere "armrest" or support, unlike the other white girls who can "do anything."

Filmmaker Matthew A. Cherry resurfaced a past GapKids campaign photo that featured a similarly designed shot, only this one with a black child using a white child as an armrest, igniting further debate.

As seen in a short video tweeted by GapKids, there were plenty of other photos taken during the shoot, most of which show the black girl being more than just an armrest.

Regardless of Gap's intent, it's apparent that the photos have started a heated debate — something that could've been avoided with a more diverse cast of children, different photo choices and a marketing team catching the blunder before it went viral.

What do you think? Much ado about nothing? Or does Gap deserve further scrutiny?

"As a brand with a proud 46 year history of championing diversity and inclusivity, we appreciate the conversation that has taken place and are sorry to anyone we've offended. This GapKids campaign highlights true stories of talented girls who are celebrating creative self-expression and sharing their messages of empowerment. We are replacing the image with a different shot from the campaign, which encourages girls (and boys) everywhere to be themselves and feel pride in what makes them unique."