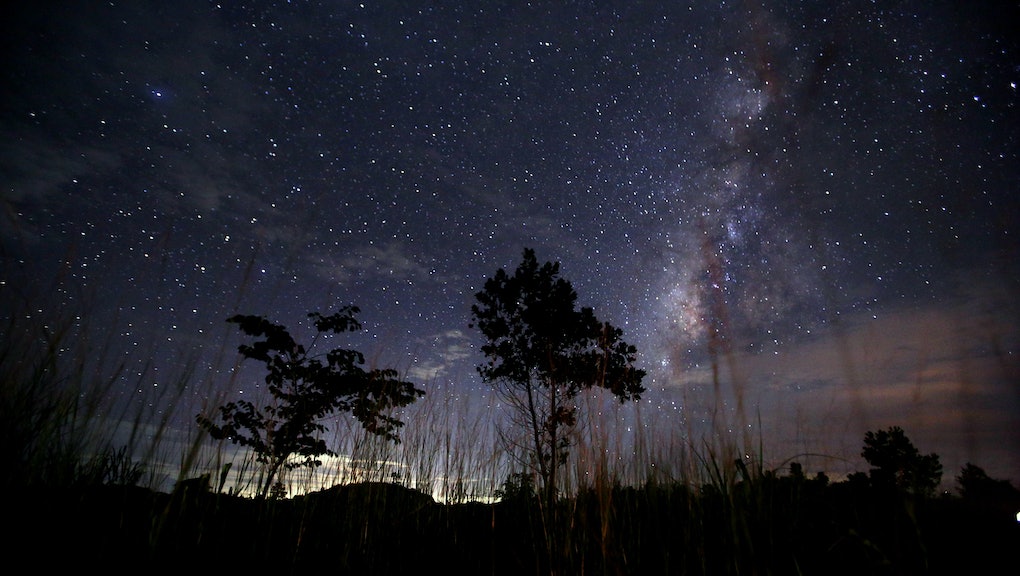 Stargazers hoping to catch a glimpse of the wonders of the universe are increasingly finding themselves shit out of luck.

In recent years, entire observatories have shut down as the number of city lights grow and block out the view of the cosmos. Now, the most productive observatories are tucked away in places like remote mountaintops, deserts or the South Pole, far away from any glaring city lights.

Collectively, the problem is referred to as light pollution. April 4 marks the start of International Dark Sky Week, a campaign designed to bring attention to the growing issue.

One product of light pollution is called "skyglow." Unshielded city lights scatter their light in all directions, including straight up into the sky. That light gets reflected and scattered by clouds and atmospheric particles and causes skyglow that blocks out starlight.

That's why you won't ever see a view like this from a city:

Now we can only hope to catch a glimpse of a tiny fraction of stars.

"Today, a person standing on the observation deck of the Empire State Building on a cloudless night would be unable to discern much more than the moon, the brighter planets, and a handful of very bright stars — less than 1% of what Galileo would have been able to see without a telescope," the New Yorker reported.

Astronomer John Bortle designed a scale called the Bortle Dark-Sky Scale to rank the darkness of areas and help identify where skyglow is a problem. A class-one sky on the scale has no light pollution, while class nine has the most. You can see how light pollution can completely warp your view of the sky in the illustration of the scale below:

Light pollution is enough to ruin the plans of a casual stargazer hoping to catch a glimpse of a meteor shower, but it's particularly bad for professional astronomers.

One of the most important pieces of data astronomers collect are spectographs that split the light from celestial objects into different wavelengths. Spectrographs help astronomers figure out the chemical composition, temperature and speed of the objects they observe, according to Dave Kornreich at Cornell University. But certain types of city lights will show up on spectrographs and warp the data.

Cities that are switching to the energy-saving LED lights are actually worsening the problem. LEDs give off a harsher blue-white light than the softer lights they often replace.

Even if you're not into astronomy, there are other reasons to worry about light pollution.

Light pollution can disrupt entire ecosystems. For example, city lights can confuse newly hatched turtles as they scramble to find the ocean or it can cause migratory birds to lose their way.

Studies have shown that exposure to blue light can mess with our circadian rhythm. Light and dark cycles help regulate the body's production of melatonin, which helps us sleep. When that cycle gets out of sync, our sleep can suffer. The more light pollution, the bigger chance our sleep will get disrupted.

Is there a solution?