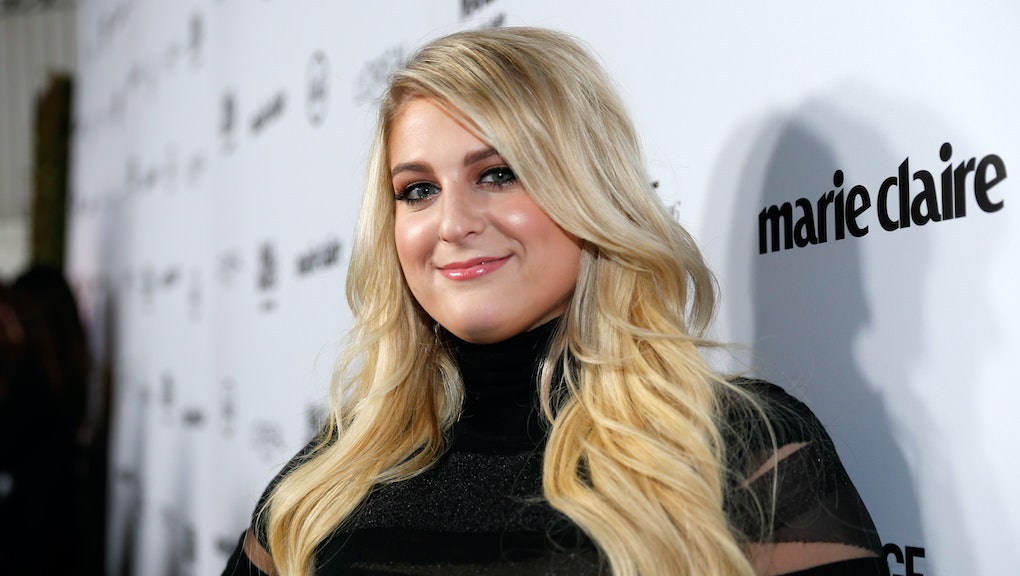 Despite "No Photoshop Pledge," Meghan Trainor’s 'Seventeen' Cover Has Fans In a Fury

Meghan Trainor's breakout hit "All About That Bass" was chock-full of body positivity, including this choice lyric: "I see the magazines working that Photoshop/ We know that shit ain't real/ Come on now/ Make it stop."

Well, it seems that lyric might've fallen on deaf ears. Trainor's May 2016 Seventeen Magazine cover, which was recently revealed on Instagram, is the latest victim of digital alteration accusations.

What are commenters saying?

Some think that something is off with her head.

"Doesn't her head not look connected to her body?" one user asked.

A few are calling out her skinny arms.

"I love Meghan! Her arms look so skinny and Photoshopped here though. Let the woman be a size 12 and happy," someone commented.

Others are simply stating that she looks altered.

"This looks so weird, what kind of editing happened right here?" someone asked. "She's so beautiful! So why the Photoshop?" a user asked.

Many are calling out Seventeen for promoting body positive ideals and then doing, well, this.

"I like how it says in bright and bold pink letters 'love your body,' but they Photoshopped the shit out of her," someone said. "'Love your body and feel confident' but instead this bullshit magazine decides to Photoshop someone's body size to make them feel insecure instead," another wrote.

Along with the cover reveal, Seventeen.com published some of Trainor's interview, where she discusses loving her curves.

"A couple of years ago, you'd never see me in a dress," she tells the magazine. "For a good six years, I wore sweatpants and sweatshirts, even on vacation in 90-degree weather — I was hiding. And now I want to sha-zoom me. I mean, I want it tight. I want to show off what I got."

Did Seventeen forget having its staffers sign a "body peace treaty"?

In 2012, under Ann Shoket's lead at the time, the magazine stated that it would "never change girls' body or face shapes."

This came after a 14-year-old girl started a petition against Photoshopping, which ended up receiving more than 80,000 signatures. The petition called for the magazine to include one unaltered spread each month.

"While we work hard behind the scenes to make sure we're being authentic, your notes made me realize that it was time for us to be more public about our commitment," Shoket wrote in a letter to readers.

Trainor and Seventeen have yet to comment on the situation (Mic reached out to both camps for comment). However, it seems that the singer might've deleted a Tweet she posted announcing her cover, leaving us speculate whether she disapproves of the cover.

Of course Trainor likely had no say about the final editing of the photos and, it should be noted, seems to be leaning forward in the photo, which could easily cause odd proportions.

The lesson here is simple: Magazines, if you don't want to have fans in a frenzy, maybe you should take some advice from Trainor's latest hit: "All you gotta say is ... Nah to the ah to the no, no, no" to digital alteration.