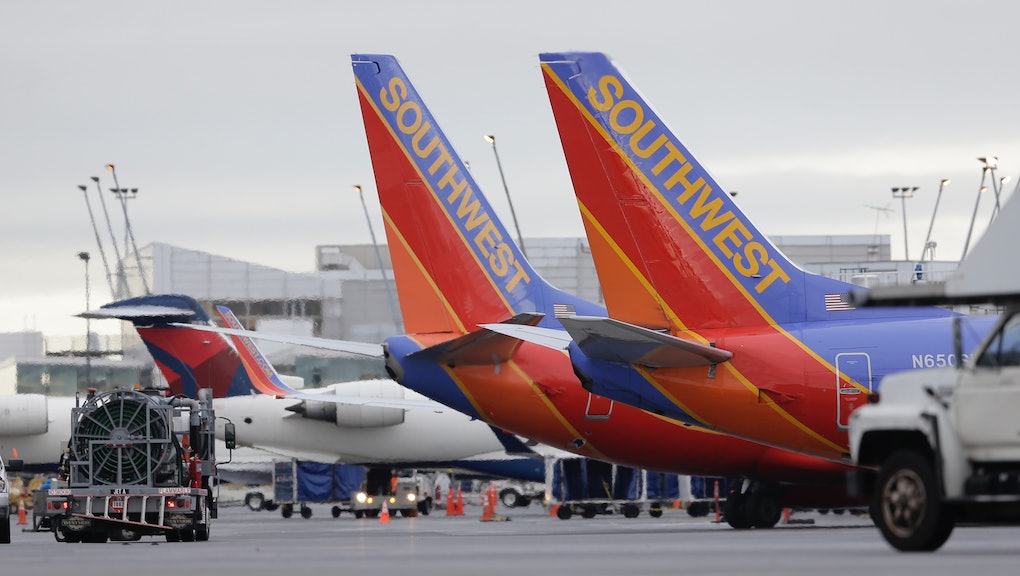 Khairuldeen Makhzoomi expected his flight from Los Angeles to Oakland to be uneventful. But he hit a bout of turbulence even before the plane even took off from LAX.

Makhzoomi, 26, is a student at the University of California, Berkeley. He was born in Iraq and came to the United States as a refugee in 2010. He'd recently attended a United Nations event and wanted to share his excitement with an uncle who still lives in Baghdad, so the two chatted on the phone in Arabic before takeoff.

But when a nearby passenger overheard the conversation, she alerted Southwest. When Makhzoomi protested the way he was being treated, the airline removed him from the flight, saying he had made crew members feel "unsafe." He said that Southwest representative talked to him "like I was an animal."

"I said to [a Southwest employee], 'This is what Islamophobia got this country into,' and that made him so angry," Makhzoomi told the New York Times. "That is when he told me I could not go back on the plane."

Discrimination against Muslims at airports has become so common that there's now a term for it — Flying While Muslim. Here are some of the other trivial reasons Muslims have been kicked off airplanes in the U.S.

In March, Eaman-Amy Saad Shebley and her family — including her husband and three small children — boarded a flight from Chicago to Washington, D.C. Shortly thereafter, the family was removed because of a supposed "safety of flight" issue. In this case, that meant asking a fight attendant for a five-point harness for one of the children. "Shame on you ?#?UnitedAirlines for profiling my family and me for no reason other than how we look," Shebley said in a Facebook post that later went viral.

United Airlines denied any wrongdoing, saying in a statement that "we have zero tolerance for discrimination."

Failing to fly in the same class as your friends

Shan Anand and Faimul Alam were with two friends on a New York City-bound flight from Toronto in January when all four were booted from the airplane. "[An American Airlines agent] said the stewardess and the captain felt uneasy with us being on the flight," one of the men, identified only as W.H., said in an interview with the New York Daily News. "There were inconsistencies of our behavior traveling as a group, because two of us upgraded and two of us didn't." The men later filed a $9 million federal lawsuit for discrimination.

Having the audacity to ask for a soda

Tahera Ahmed was on a flight from Chicago to Washington, D.C., when she asked a stewardess for an unopened can of soda. According to Ahmed, who wrote about her ordeal on Facebook, the stewardess said, "We are unauthorized to give unopened cans to people because they may use it as a weapon." A nearby passenger shouted, "You Muslim!" and told her to "shut the f**k up."

The airline later apologized, chalking the incident up to a "misunderstanding."

In 2006, human rights activist Raed Jarrar tried to board a flight at New York City's John F. Kennedy airport with a shirt that read, "We will not be silent" in English and Arabic. Airport security made him change the shirt because, officials said, it was like "going to a bank with a T-Shirt reading 'I am a robber.'"

Jarrar sued the airline for discrimination. JetBlue and TSA employees shelled out $240,000 to settle the case in 2009.  "A $240,000 award should send a clear and strong message to all TSA officials and to all airlines that what happened here is wrong and should not happen again," ACLU attorney Aden Fine said to CNN at the time.

Muslims — or anyone who happens to look Arab — have long encountered discrimination at American airports, thanks in part to the Transportation Security Agency's behavior profiling program, which trains airport staff to identify potentially suspicious travelers based on how they look, act, or talk. Top officials admitted in 2013 that the program has failed to catch a single terrorist.