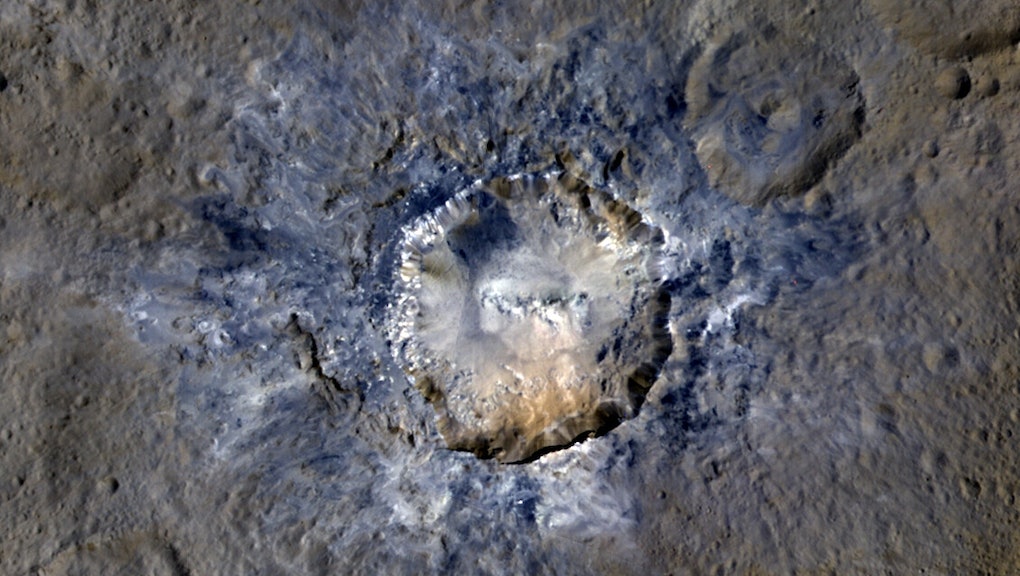 Dwarf planet Ceres has some huge craters, and we just got our first up-close look at them.

The new images were taken just 240 miles over the planet. That's closer than the International Space Station is to Earth.

The Haulani crater on Ceres spans a whopping 21 miles:

The false color image of the crater below is helping scientists figure out Ceres' strange geology. The blue color represents younger geological features, so scientists think that whatever struck the surface and created Haulani Crater must have struck fairly recently.

"Haulani perfectly displays the properties we would expect from a fresh impact into the surface of Ceres," Martin Hoffmann, one of the researchers working on the Ceres mission, said in a statement. "The crater floor is largely free of impacts, and it contrasts sharply in color from older parts of the surface."

A much smaller crater has also captured some attention. The Oxo crater, just six miles across, has a "slump" in the rim of its crater where some material has fallen form the edge into the pit, creating a landslide.

The interesting part about Oxo is that it's made of minerals that are different from the rest of Ceres.

"Little Oxo may be poised to make a big contribution to understanding the upper crust of Ceres," Chris Russell, principal investigator on the Ceres mission, said in a statement.