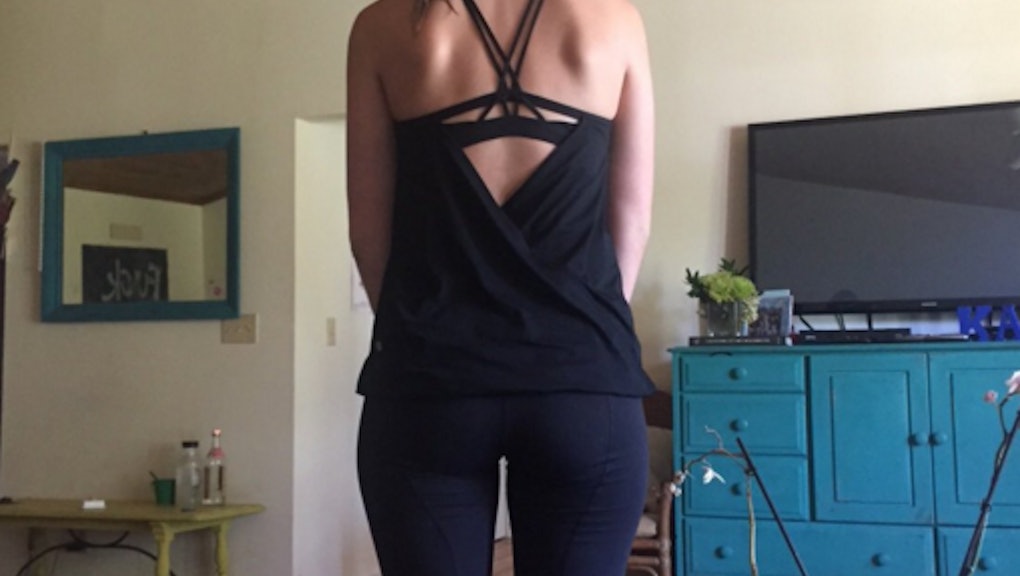 "Athleisure" might've just been added to the dictionary, but some universities aren't ready to embrace the Lululemon strappy tank top trend just yet.

Such was the case for Danielle, a student at Washington and Lee University in Lexington, Virginia, who was kicked out of the school's fitness center for inappropriate attire.

Was she wearing a see-through top? Pasties? This underboob bra? Nope. This is what she was wearing when the incident occurred:

"Your shirt is cut too low in the back," a student employee told Danielle, as recounted in an interview with Total Sorority Move. "I'm going to have to ask you to leave."

Confused because this is exactly what many girls are wearing in gyms (and to the mall... and to class... and to pretty much everywhere else) across the country? Danielle was a little thrown off as well.

According to her, the private school's fitness center dress code states "all users must wear proper fitness attire." The following details are available on the university's website, as well as in an explanatory PDF.

The school does not allow "sleeveless shirts with the arm holes or gaps open below the bottom of the shoulder blades" or "shirts that expose parts of the abdominal area, rib cage, and/or the lower back, front or sides of the torso. (For the purposes of this policy the lower back is the area below a horizontal line under the shoulder blades.)" Because, rib cages are dangerous, after all.

Danielle was not without a sense of humor about the ridiculousness of her ejection. In her (sarcastic) words, "the whopping four boys in the fitness center could safely enjoy their workouts without stumbling upon the erotica that was displayed in the form of a keyhole on my top."

The school is defending their archaic protocol. The school's website states the dress code was put into place for the "health and safety of all users," to "[prevent] skin infections and to preserve the longterm life of the equipment." Two completely different ideas here.

Since conversation has started on social media, the school has posted a statement on its website from the Director of Athletics stating, "We want to assure the W&L community that the policy applies equally to men and women." Sure. Right.

We've got some questions here: Wasn't Danielle's tank designed specifically for the gym? Who is she even putting in danger by wearing a cut-out top? Herself? She's an adult, can't she take that risk on her own? Perhaps the fitness director just really, really hates Lululemon?

Read more: Teen Protesting School's Dress Code Forced by Her Principal to Get on Her Knees

They aren't the only school with a strict dress code. Quinnipiac University in Hamden, Connecticut, requires students to cover their shoulders. The school said the policy was put in place for safety reasons, similar to what Washington and Lee said, as there is a risk of MRSA and other staph infections.

These aren't two isolated instances. The University of Wisconsin-Milwaukee also has a rule in place that states shirts must "fully [cover] the back, shoulders, chest, stomach and sides." While the school stated health concerns as one reason for the rule, it also cited this: "Muscle-bound men in cut-off shirts might deter freshmen from working out."

Want to ban tank tops for health reasons? Fine. But if these schools are using safety as an excuse to ban clothing to avoid "distraction," and/or discriminating against one sex, than this is a case of schools unnecessarily policing their students' wardrobes.