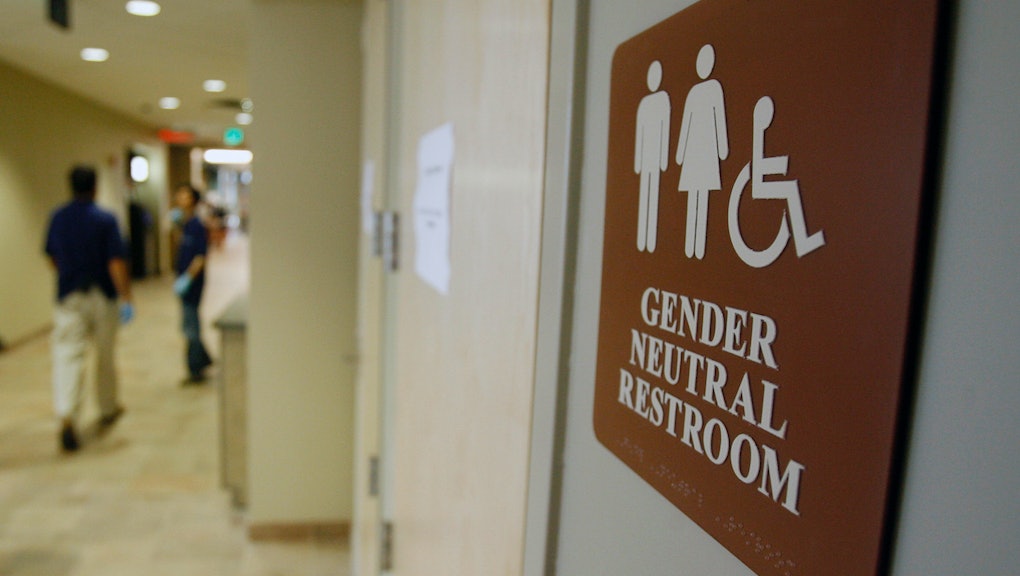 If You’re Transgender in Oxford, Alabama, You Need $500 to Use Your Preferred Bathroom

Imagine having to carry a birth certificate and bail money just to use a public bathroom. That's become a reality for the transgender community in and around Oxford, Alabama.

This largely white northeastern Alabama city of over 21,000 passed a law Tuesday making it a misdemeanor for individuals to use a public bathroom that is different from the gender on the person's birth certificate.

Alternatively, violators could receive up to six months in jail, the Associated Press reported.

Oxford's law is one more example in Southern and Midwestern states to enact laws restricting the rights and liberties of transgender people as backlash to growing trans visibility in the nation.

But some supporters of the bathroom laws say that without them predators will gain access to bathrooms to harm women and children. All despite the fact that there have been zero reports of transgender people attacking others in bathrooms.

According to the Human Rights Campaign, nearly 200 religious freedom measures have been proposed in 33 states so this year. That number includes the measures in North Carolina and Mississippi that have sparked boycotts and rebukes from corporations and entertainers.

Recent response has included the NBA's announcement that it may not hold its All-Star game in Charlotte, North Carolina, in 2017. Target announced on April 19 that it would give transgender employees and shoppers their choice of bathroom and dressing room. Target's move inspired Oxford's bathroom ordinance, City Council President Steven Waits told local news outlets, according to the AP.

Oxford has a Target store at a local shopping center.

"Bathroom bills" targeting transgender people and other anti-LGBT legislation passed in recent months have also prompted legal challenges from civil rights groups. Chase Strangio, a spokesman for American Civil Liberties Union's national LGBT project, said in an email to Mic on Wednesday that the organization was "exploring a legal challenge" to Oxford's law.

"I am continually dismayed that lawmakers are using their power to target transgender individuals, despite the fact that experience shows that there is no actual problem that flows from allowing transgender people to exist in public life and use restrooms that match who they are," Strangio said.