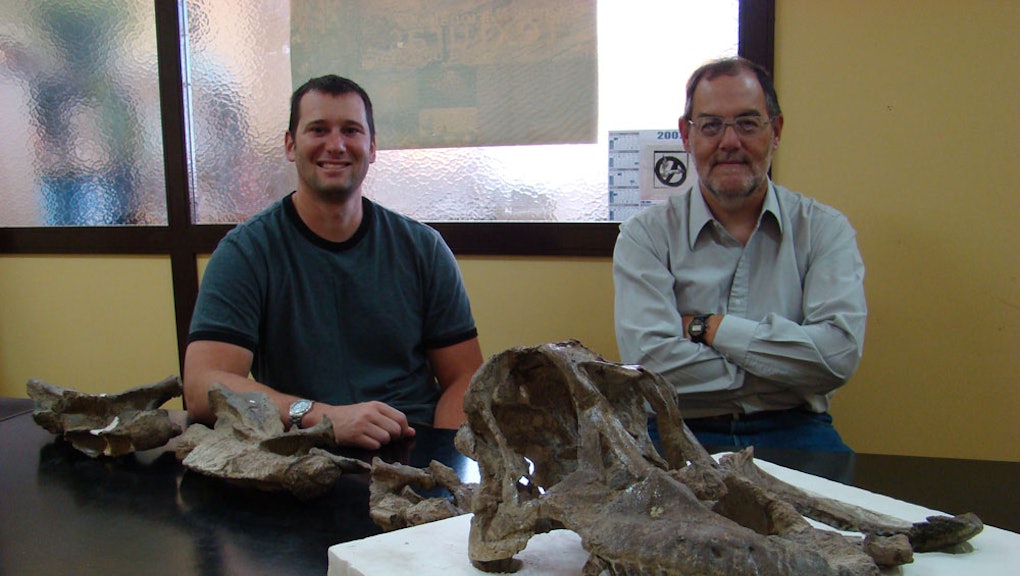 A preserved skull recently discovered in Argentina belongs to an enormous dinosaur called Sarmientosaurus musacchioi, paleontologists announced in a new study published in the journal PLOS ONE. Sarmientosaurus could provide a lot of new insight into a class of dinosaurs called Titanosaurs.

"Discoveries like Sarmientosaurus happen once in a lifetime," paleontologist Rubén Martínez said in a statement.

Paleontologists rely on fossils, especially the skulls, to figure out how dinosaurs looked and how they used to behave. There are over 60 species of Titanosaurs discovered so far, but most of those fossils are incomplete, and we don't know much about them. That's why finding such a pristine skull like this one is a big deal.

"Titanosaurs included the biggest land animals ever, so we want to know as much about them as we can," Matt Lamanna, a paleontologist at the Carnegie Museum of Natural History, said in a statement. "But to truly understand a creature, you need to have its head. And because Titanosaur skulls are super-rare, lots of important aspects of how these dinosaurs lived and behaved have really been anybody's guess."

Now we finally have some insight. Paleontologists think the Sarmientosaurus lived around 95 million years ago and likely grew to about 40 feet long and weighed about 10 tons.

Based on CT scans of the skull, it had a pretty small brain compared to its large body size. Paleontologists also think it had better vision and better hearing than many of its Titanosaur relatives. The specialized hearing may have helped it track predators or the movement of its own herd, paleontologists speculate. The bone structure suggest the Sarmientosaurus spent much of its time looking down, which probably means it ate primarily ground-based plants.

"The Sarmientosaurus skull is beautifully-preserved, which meant that we could tease out a ton of information," paleobiologist Lawrence Witmer said in a statement. "It was really exciting for us to work through the CT scan data because it gave us a glimpse into the biology and lifestyle of this animal like we rarely get with dinosaurs."